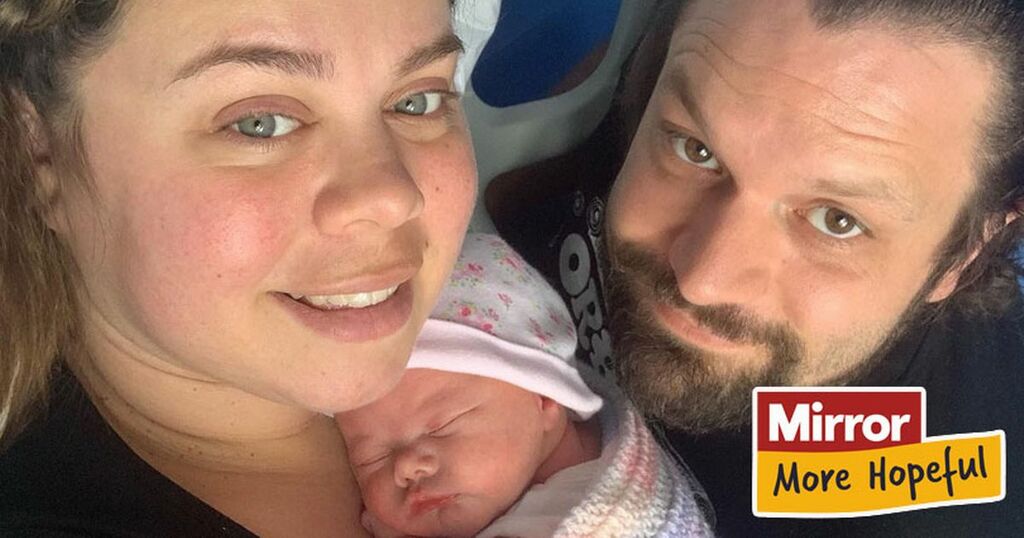 A midwife has shared her tale of finally becoming a mum in a bid to inspire others struggling with fertility issues.

Now they have a daughter Harriet, who was born on 9th August 2021 weighing 6lb 6oz.

Suffering fertility problems can feel extremely isolating, prompting Katie to speak about their experiences in a bid to help others struggling.

The couple were devastated when a blood test revealed the fertilised egg was implanted outside of the womb.

Katie was forced to have a fallopian tube removed and began to fear she may never become a mum.

The devastated couple were expecting on two more occasions but their first scan sadly confirmed there was no heartbeat.

But now their dream of becoming parents has come true, following a round of IVF.

Katie said: “I found out about the ectopic pregnancy whilst at work as I began bleeding. I went to another department for a scan which came back normal but the blood tests didn’t.

“It felt surreal hearing the words ‘ectopic pregnancy’. Even though I am a midwife, I didn’t understand what was happening.

The following year in January 2019, Katie had tests through the NHS which came back normal, and the couple switched to a began plant-based diet in a bid to improve their fertility.

In March 2019, they were delighted to see two lines on a pregnancy test but sadly their joy turned to sorrow at a nine-week scan.

Katie said: “I started bleeding early on and scans were ok up until nine weeks. We were devastated when the sonographer said there’s no heartbeat.

“I had to stay in hospital and take medication to remove the baby. It was very traumatic.”

In January 2020, Katie was pregnant again and started bleeding, and a heartbeat wasn’t discovered at the six-week scan.

The devastated couple decided to pay for private healthcare, where Katie was diagnosed with Hashimoto - an autoimmune disease that damages the thyroid gland.

She adds: “My blood was sent to America for further testing and they discovered I have a blood clotting disorder called
Plasminogen activator inhibitor type 1 [PAI-1].

"It is a rare bleeding disorder that causes excessive or prolonged bleeding due to blood clots being broken down too early.

“The consultant explained my body over-clots and shuts off the blood flow when pregnant which is why the babies had stopped growing.

“I was put on blood thinners and aspirin before starting fertility treatment. We spent £12,000 of our savings for all the tests and IVF.

“It worked the first time but I was so anxious and paid for five scans in the first 12 weeks.”

The couple admits their journey to parenthood took its toll on their mental health.

Wayne, who is a vehicle technician, had counselling through BEN - which is a not-for-profit organisation that partners with the automotive industry to provide support.

Katie said: “Wayne and I kept each other going but he had counselling with BEN. He felt guilty because I had to go through it all and he couldn’t do much.

“It started to affect his work and life so the best option was additional support. Miscarriages definitely affect men as much but they are less likely to talk about it.

“We were over the moon when my bump began to grow and it was plain-sailing from the 12-week scan.”

Katie said: “I want to raise awareness of infertility and miscarriages. It is a lonely process but I want others to know, you are not alone.

“I am loving being a mum. Harriet is perfect. I want to give others some hope by sharing our story.”