Mickey Levy: Israel's Knesset speaker is reaching out to the world 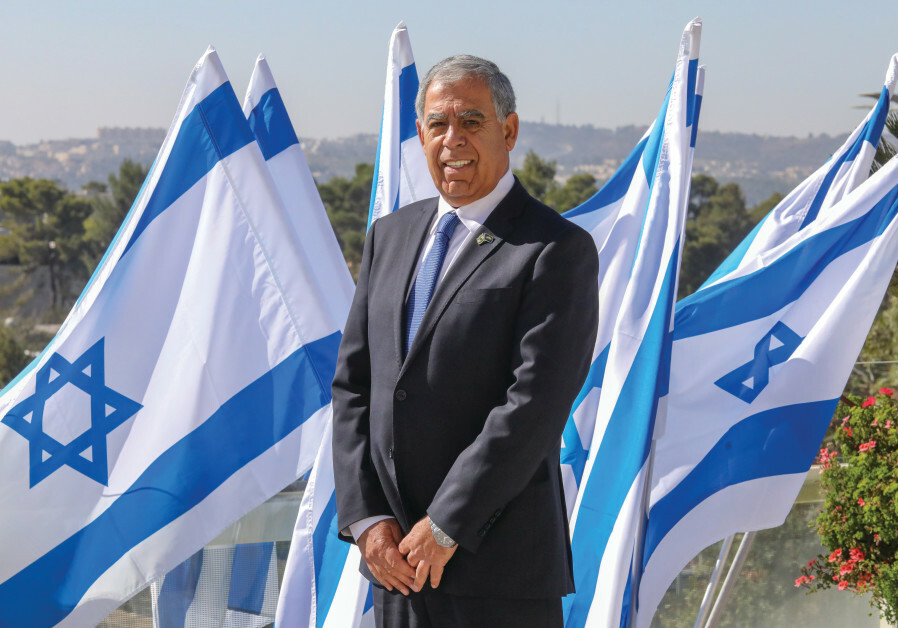 At Monday’s stormy debate between Prime Minister Naftali Bennett and opposition leader Benjamin Netanyahu in the Knesset plenum, Netanyahu mockingly asked Knesset Speaker Mickey Levy to be softer on Coalition MKs if they heckle him than he was with the Likud MKs who shouted at Bennett.

Levy threw out a dozen Likud MKs, one after the other, in an effort to restore decorum in the plenum. But even those MKs admitted afterward that Levy was absolutely right, fair, balanced and statesmanlike under difficult circumstances.

The speaker’s background makes him uniquely positioned to handle the Knesset during such a divisive time.

He was raised by poor Kurdish immigrants in a small, Jerusalem shack with no indoor kitchen and with only one bedroom, where his parents and their five children all slept. The part of Nahlaot that was called shchunat hapahim (sheet metal neighborhood) back then has since been gentrified, and apartments there cost millions.

As a child, Levy visited the nearby building site that would become the Knesset and was scolded by his mother when a guard dog ripped his pants, because they could not afford another pair.

His father served in the Irgun underground brigade and spent time in a British prison. His mother smuggled grenades for the resistance. Later on, his father had trouble getting a job, because Irgun members were not allowed in the Histadrut Labor Union.

Levy came from the Right, but is now in a centrist party. He came from a religious home and is now secular, but he did not let a security car follow him when he walked to a synagogue near his home in the western Jerusalem suburb of Mevaseret Zion during the High Holy Days.

He rose through the ranks of the police to become chief in Jerusalem, and was also the police emissary in Washington, where he gained an understanding of religious pluralism and the Jewish world.

In an interview with The Jerusalem Post in his Knesset office, which has a panoramic view of the capital – his first interview with the English-language media – Levy said he wants Israeli democracy to go back to being the source of pride for the Jewish state around the world that it was before the country endured four divisive elections in two years.

“It’s not simple to be the speaker of this building at such times, after a change in the government,” he said. “When guests from abroad come, I tell them 73 years ago we founded the state after 2,000 years of exile, but we’re still tribes, and the time has come to be one people. We cannot lose our state to baseless hatred. Israel is the home of the Jewish people, and the Knesset represents the State of Israel and the entire Jewish world.”

Levy said decisions made in the Knesset impact Jews around the world, and therefore it has a responsibility to be pluralist and inclusive of all religious streams.

Rabbi Stuart Weinblatt, the president of the rabbinic cabinet of the Jewish Federations of North America, taught Levy’s daughter Liron for her bat mitzvah, in which she read from the Torah at Weinblatt’s Conservative synagogue in Potomac, Maryland.

“All the streams of [Judaism in] the world should see Israel as their national home,” Levy said. “All streams deserve respect. Every Jew’s Judaism is important, not his stream. We need to be a model and fix ongoing problems.”

Levy called for the Western Wall agreement that was reached in January 2016 to be implemented. When a Reform or Conservative group visits the Knesset, Levy said, he would be happy to help them make a minyan in the building.

The new government, with its eight parties from across the political spectrum, is representative of the pluralism that Levy advocates. He believes it should be used to present Israel well to the world.

“We can be proud of Israeli democracy,” he said. “The unprecedented diversity displays our democracy at its best. Of course, there are ups and downs, with controversial bills and other tests, but Israeli democracy is very strong. The diversity of the Israeli population – Jews, Muslims, Arabs Circassians, religious, secular – shows we can live together.”

Much like his Yesh Atid Party leader, Foreign Minister Yair Lapid, Levy aims to reach out to the world. He wants world leaders to come to the Knesset, which has not been addressed by any international figure since then-US vice president Mike Pence in January 2018.

Next week, Levy will go to Greece for the European Conference of Presidents of Parliaments, which brings together speakers and parliament presidents from dozens of countries. He will be meeting there with Greek Foreign Minister Nikos Dendias, British House of Commons Speaker Sir Lindsay Hoyle and the speakers of the Georgian and Austrian parliaments.

“The Knesset needs to return to the international arena,” he said, while acknowledging that the coronavirus still makes that goal a challenge.

This week, Levy hosted former US president Donald Trump’s daughter Ivanka and her husband, Jared Kushner, for an event about the Abraham Accords, with a staunchly Republican audience. He recently hosted a group of Democratic senators and congressmen. He said relations with the US need to be strengthened with both parties.

Levy also wants MKs to return to the fight against antisemitism. He said there are countries that still deny their role in the Holocaust, and countries that cross into the definition of antisemitism by singling out Israel unfairly in their criticism of the Jewish state.

BUT LEVY’S main goal is changing the discourse back home in the corridors of the Knesset, which has become increasingly virulent. During Monday’s debate, Likud MK May Golan called Bennett “a liar, a cheat and a scoundrel,” and after Levy kicked her out of the plenum, she went to the visitors gallery, where all guests must be silent, and she got thrown out of there for shouting more epithets.

“We can be political rivals, but we cannot let hatred overcome us,” he said. “There must be an acceptance of the other. I have empathy for those who lost power, and I understand it’s hard to digest. We have to bridge the gaps.”

The remaining fight is focused on the Coalition’s two-MK majority in the Knesset Finance Committee, and on that, Levy does not think the Coalition needs to compromise further. He believes the time has come for the opposition to end the fight and get back to work on the committees that its MKs have been boycotting in protest.

“The budget will pass, and the coalition will continue to function, despite having eight parties with different worldviews,” Levy said. “It is important for us to stay united to serve the people, their health, education, welfare, economy and the strength of Israel.”

Levy said that after the budget passes, the parties in the coalition have to bring achievements, but added that they will find balances and brakes needed to compromise.

Unlike his predecessor Yariv Levin, who constantly fought the Supreme Court, Levy believes the 18 bills the court has ever canceled is a relatively inconsequential and legitimate amount.

“I want more of a division of authorities, which has been harmed in recent years, but my approach is the opposite of Levin’s,” he said. “As long as I head this house, it will respect the decisions of the Supreme Court, even if I disagree with them and argue with them.”

The low point for Levy since he became speaker was when he mistakenly voted against the Coalition on a bill facilitating the appointment of more female representatives on the panel that chooses rabbinical judges. He took responsibility, instead of trying to use his powers to pretend the vote didn’t happen. That gained him more respect from his political opponents.

But even if another candidate forms a government in the current Knesset, it would be nearly impossible to force out Levy. A special majority of more than 80 MKs out of 120 would be needed, and he would need to approve removing himself on the Knesset agenda.

“Theoretically, it can happen; but practically, I don’t see it happening,” he said.•