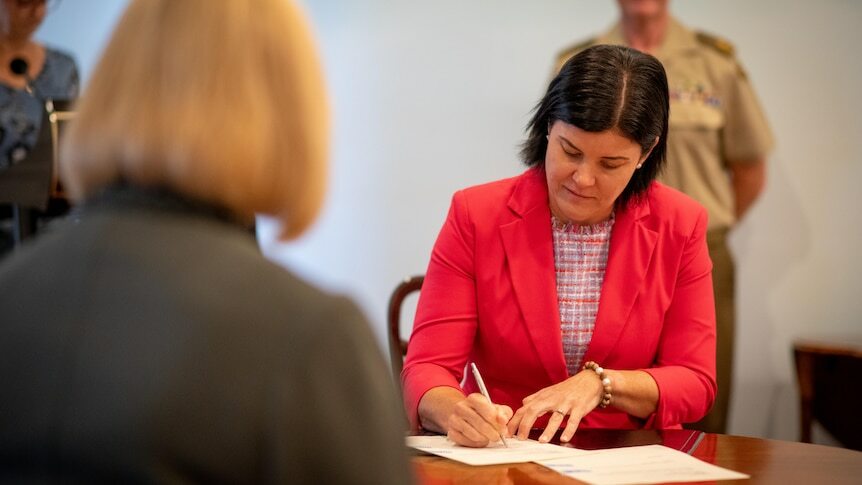 ABC News
In the battleground seat of Lingiari, the Coalition hopes to dim Labor’s star power with a first-time upset

Deputy Chief Minister Nicole Manison will remain in her role under the new Natasha Fyles administration, as Prime Minister Scott…

Newly-appointed Northern Territory Chief Minister Natasha Fyles says addressing social issues will be her top priority in the role, as…

There's a small sea of red at one of the key meeting grounds of the Top End seat of Solomon — the busy Parap weekend markets, where political hopefuls are making pitches to constituents as they buy produce and collect takeaway laksas.

Among the Labor volunteers in red T-shirts is the incumbent candidate for the marginal seat, which encompasses all of Darwin and much of the satellite city of Palmerston.

A former commando, Luke Gosling is vying for an unprecedented third consecutive term by talking up his party's commitments on key local issues.

"The big one is cost-of-living. Everything's going up price-wise except for people's wages," he said, listing job security and access to education as other target areas.

Held on a margin of 3.1 per cent, Solomon is shaping as a key election battleground, with frontbenchers from both major parties repeatedly venturing north to visit.

But political pundits are considering how a significant shift in Territory politics — the sudden resignation of NT Labor Chief Minister Michael Gunner earlier this week – may have reshaped the battle.

Rolf Gerritsen, a professorial research fellow at Charles Darwin University and political observer, said the campaign for the NT's two lower house seats, both marginal electorates held by Labor, had been notable for its lack of local involvement.

On one hand, Country Liberal Party candidates have been vocal on the issue of crime — predominantly an issue for the NT government.

On the other, unlike premiers elsewhere, Mr Gunner and the majority of his frontbench had been largely absent from federal Labor's efforts.

Mr Gerritsen suggested the absences may be deliberate.

"The CLP is obviously trying to use crime to improve its vote in both Solomon and Lingiari," he said.

"Increasingly, the crime issue has been associated with Gunner.

"I think the more Territory's Labor ministers stay away from the campaign, the less people conflate Territory issues with federal issues."

Natasha Fyles – who holds the safest seat in NT parliament – was appointed as Mr Gunner's successor on Friday, and spent part of her first full day as Chief Minister campaigning with Opposition Leader Anthony Albanese.

He was asked whether Mr Gunner (who has recently taken time off work to welcome a second son) had been invited along.

"All I know is we have a new chief minister, and I'm sure Natasha Fyles is looking forward to catching up with Albo [on Saturday]."

She has twice contested the seat of Lingiari and lives in that electorate — in rural Darwin — but said those experiences would help her represent the constituents of Solomon.

"I actually think it's more of a reason that they should be considering me, because I have an in-depth understanding of issues throughout the Territory," she said.

"I've been in business 35 years, so I have that level of understanding as well, coupled with voluntary work, on local government as a councillor, and on volunteer organisations."

Asked if she hoped dissatisfaction with the Gunner government would improve her political fortune, Ms MacFarlane acknowledged voters could lodge a protest if they weren't happy with the Territory government.

She linked Mr Gunner, who resigned to be with family, to the future performance of a federal Labor government.

"As far as Michael Gunner goes and what has transpired, it is just totally dysfunctional," she said.

"The Labor party can't even organise themselves. How can we put trust in them going into a federal election?"

Resignation could have 'marginal impact' to improve Labor's vote

The campaign for Solomon has been dominated by conversations around Darwin's port, a source of national security concerns since it was leased to a Chinese firm in 2015.

The Coalition spruiked its budget commitment of $1.5 billion for port infrastructure in the coastal region of Middle Arm just a few days into the campaign.

Labor has since vowed to spend that money, but called for more detail, and has released documents about the federal government's involvement in the controversial lease.

While many promises and sweeteners from both major parties have targeted Lingiari, the Coalition's other announcements in Solomon have included a grant for Charles Darwin University and funding for airport infrastructure.

Labor has also made commitments to domestic violence support, CareFlight and a new youth hub in Darwin's northern suburbs.

Solomon is also being contested by the conservative minor party Liberal Democrats, whose candidate Kylie Bonanni is among several former CLP candidates who have defected from the party.

The NT Greens candidate is Aiya Goodrich Carttling, a young healthcare worker who says the major parties have failed to offer real action on climate change.

Mr Gerritsen said Mr Gunner's resignation could have a "marginal impact" on improving Labor's vote across the NT, as it may have slowed the flow of any protest votes against his performance.

"Gunner's removal, I think, gives Labor a bit of airspace and returns the campaign more to the issues that Labor is campaigning on — cost-of-living, government promises, government probity, etc," he said.

ABC News
In the battleground seat of Lingiari, the Coalition hopes to dim Labor’s star power with a first-time upset

Deputy Chief Minister Nicole Manison will remain in her role under the new Natasha Fyles administration, as Prime Minister Scott…

Newly-appointed Northern Territory Chief Minister Natasha Fyles says addressing social issues will be her top priority in the role, as…