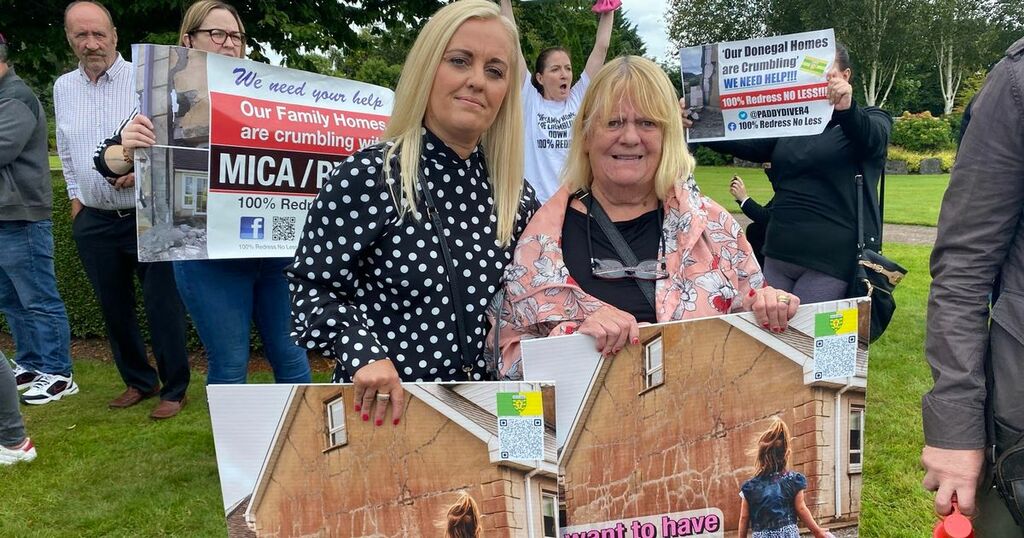 Around 50 protesters turned up to the Slieve Russell hotel in Co Cavan to highlight their plight and are calling for a 100% redress scheme for people affected by mica.

Defective building blocks containing mica have caused cracks and fissures to open in an estimated 5,000 to 6,000 homes, primarily in Mayo and Donegal.

Paddy Diver, one of the leaders of the campaign for 100% redress told the Irish Mirror that some people were on “the verge of suicide.”

He said: “That might be hard-hitting and some people may not want to hear that but it’s true.

“Their homes are not safe to live in and they’ve nowhere to live.

“It is not the homeowner's fault. These are honest, hard-working citizens that have done their best for their lives.

“We want answers. If you go into power that means you want to make a change for the better of your country and that’s the bottom line but these people just settle for whatever the golden circle says.”

Mayo woman Linda Pye said her home is now becoming “dangerous” to live in and is impacting her health with high blood pressure.

She said she is “emotionally drained” and she is afraid to allow her grandchildren to play outside her home as “pieces are falling down around the house every day.”

Paddy O’Connor from Donegal said his daughter has just sat her junior cert exams and it was a tough time for her as she is “worried and stressed over what’s happening to her home.”

He said he hopes the Government will pull through with the 100% redress scheme.

Another homeowner, Lenny, from Co Donegal said his 12-year-old daughter has told him and his wife she won’t go to college in the future so her parents “can keep the money ourselves to put towards the house.”

He said: “That’s what she’s thinking about, that’s my 12-year-old. It’s a mortal sin what is happening.

“I’ve a seven-year-old at home too and she woke up in the middle of the night and was hearing the cracking and the banging and she had to come into our bed because she was in fear.

“It’s awful a seven-year-old having to go through something like that.”