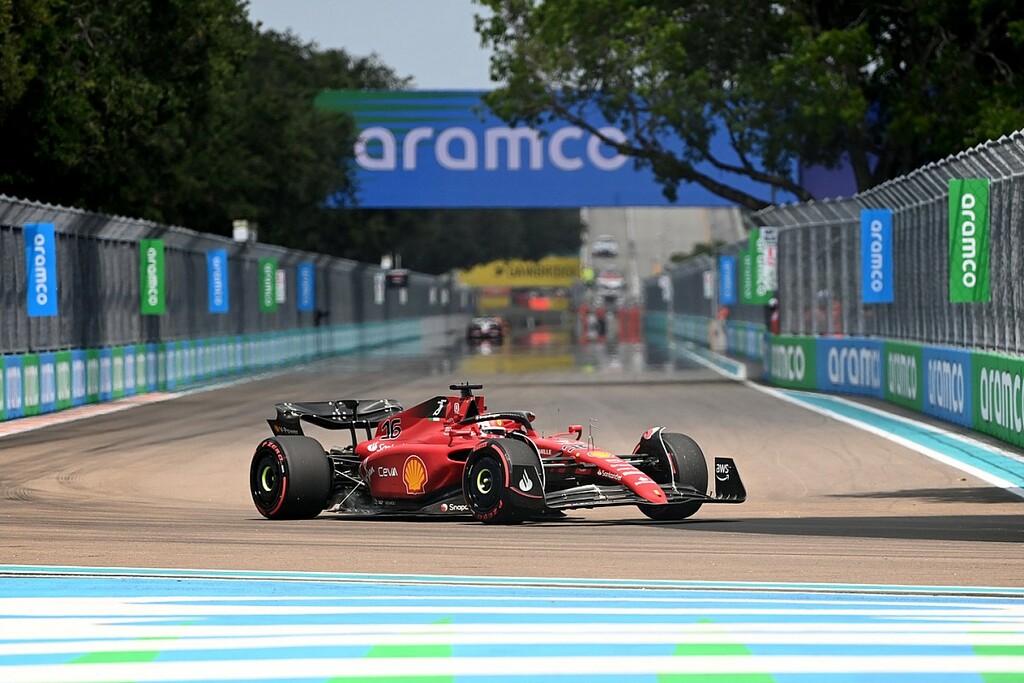 Motorsport
One subscription that gives you access to news from hundreds of sites
F1 Miami GP: Perez leads Leclerc and Verstappen in final practice

The Guardian - UK
Read news from The Economist, FT, Bloomberg and more, with one subscription
Learn More
Injured Jofra Archer ruled out for season to leave T20 World Cup place in major doubt

Leclerc, the points leader and two-time race winner so far in 2022, made the most of the extreme track evolution on the brand new street track to set the benchmark at 1m31.098s.

That gave him a slender cushion of seven hundredths of a second over Russell, as the W13 sports a more efficient front wing plus lower downforce specification rear and beam wings for this weekend.

Max Verstappen led his Red Bull stablemate Sergio Perez inside the top four, but the reigning champion was hobbled by the high Florida temperatures that truncated his running.

Nicholas Latifi led the Aston Martins of Lance Stroll and Sebastian Vettel out of the pits to a chorus of cheers as the capacity 80,000 crowd clapped eyes on the cars for the first time.

All but Mick Schumacher took to the 3.3-mile circuit within the first two minutes of the hour-long session, the majority completing their early laps on the medium C3 tyre.

Zhou Guanyu and Perez both ran deep into Turn 1 as they pushed the limits of the sweltering asphalt, which was recorded at more than 50 degrees Celsius.

Meanwhile, Russell was forced to jump on the brakes and stop in the pitlane to avoid the Alpine of Fernando Alonso as the two-time champion emerged out of the garage.

To get acclimatised to the new venue, most teams did away with the customary installation laps and kept their drivers on track - Schumacher joining eventually after eight minutes.

The green track surface proved particularly slippery as Yuki Tsunoda and Leclerc had to rejoin after both lost the rear and spun their cars, while Verstappen pushed the limits by tapping the outside wall at the Turn 16 left-hander.

Despite their early scares, Leclerc ran to the top of the times with his 1m34.846s to hold a three-tenth advantage before Verstappen bolted to a 1m33.44s to run clear by 0.7s.

Ferrari and Red Bull continued to swap places at the top of the timing board as the track evolved to offer up more grip, bringing the lap times under the 1m33s barrier.

The early unofficial battle peaked with a 1m32.442s from Carlos Sainz, as Leclerc ran only a tenth adrift on the same medium-compound Pirelli to knock soft-runner Perez to third.

But the Red Bull running was swiftly curtailed when Verstappen, voicing his frustration at being unable to learn the track fully, was called into the pits after only nine laps.

The team then inspected the rear end of his RB18 as they battled overheating.

Valtteri Bottas then brought out the red flags after 25 minutes when the Finn lost the rear of his Alfa Romeo through the medium-speed long left hander of the Turn 7-8.

He appeared to suffer a moment of snap oversteer and as the C42 ran over the painted run-off, he was powerless to resist as the car shunted backwards into the TecPro barrier.

The rear wing assembly appeared to bear the brunt of the impact. Bottas did not resume the session.

Green flags were waved eight minutes later, the interruption affording Red Bull the opportunity to send out both Perez and Verstappen for the last quarter of an hour.

Sainz then emerged on a set of the C4 soft compound and might have caused a second red flag in quick succession when he suffered a big high-speed spin at Turn 4.

The Ferrari driver lost the rear and ran over the painted run-off, fortunate to avoid the perimeter walls on either side of the track and he pitted with a front-right puncture.

Pouncing on the scare for his front-running rival, Verstappen was soon back up to speed as he bolted to the top with a 1m31.350s effort on soft tyres, then improving to 1m31.277s.

But he soon called it a day, jumping out of the car with four minutes to go having not completed a stint of more than five laps aboard his hot RB18.

His advantage stood at 0.5s ahead of the in-form Alexander Albon, who buzzed the timing line with a 1m31.854s, also on soft tyres, to climb into second place aboard his Williams.

Then the late improvements from Leclerc and Russell came to set the pace, as Verstappen held third and was ultimately 0.18s adrift of the fastest Ferrari.

Gasly clocked fifth over Sainz, as Albon eventually resided in seventh over Lewis Hamilton and the Haas of Kevin Magnussen, who was the only driver to dabble with the slowest-available hard tyre.

Daniel Ricciardo completed the top 10 but is under investigation for an incident involving Mick Schumacher on the back straight, the McLaren appearing to lift and force the pursuing Haas to dive off line.

In a session where many were caught up in similar incidences of possible blocking, Imola podium finisher Lando Norris ran to 11th over Alonso, Zhou and Vettel.

Motorsport
One subscription that gives you access to news from hundreds of sites
F1 Miami GP: Perez leads Leclerc and Verstappen in final practice