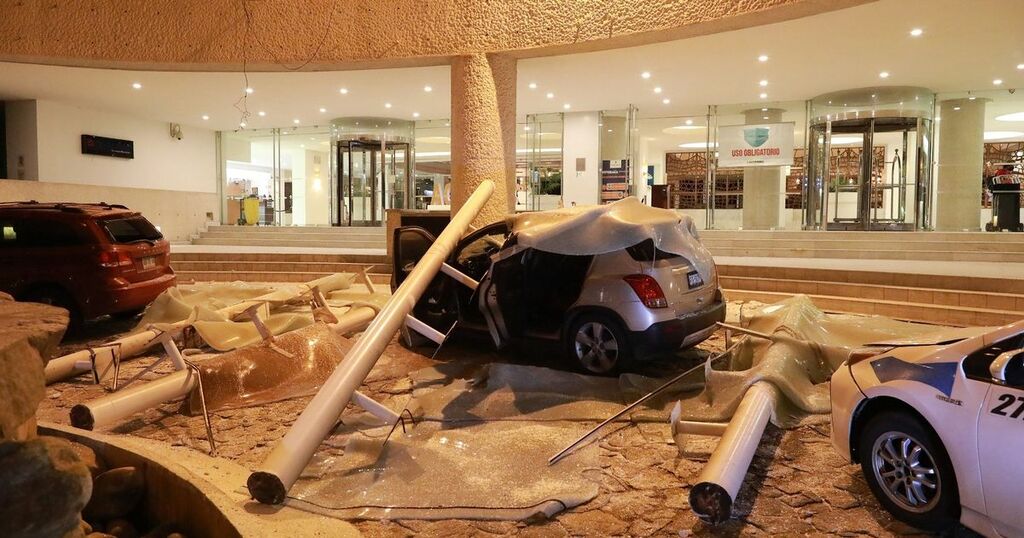 At least one person is dead after a powerful earthquake struck southwestern Mexico, with a tsunami warning declared.

The 7.0 magnitude quake struck 11 miles northeast of the resort of Acapulco, Guerrero, shaking the hillsides and downing trees, sending large boulders onto the road.

Images showed shattered glass on the ground and cars crushed under fallen debris.

The full extent of the damage is not yet known but experts had issued a tsunami alert for the coast, which has now ended.

The governor of Mexico's Guerrero Hector Astudillo told local TV that a man was killed by a falling post.

He and other authorities had earlier said there were no reports of major damage from the quake, which caused power outages in several states.

Videos posted on social media appeared to show the effects of the earthquake across the region.

In the Roma Sur neighbourhood of Mexico City, lights went off and terrified residents rushed out, some wearing just pyjamas, a Reuters witness said.

Residents huddled together in the rain, holding young children or pets, too worried to return to their homes in the dark.

"It was terrible. It really reminds me of the 1985 quake every time something like this happens," said Yesmin Rizk, a 70-year-old Roma Sur resident.

A massive earthquake that struck the Mexican capital in 1985 killed thousands of people.

Utility poles fell on a number of vehicles in Acapulco and the façade of a church collapsed, according to an AFP correspondent.

A tourist from Mexico City who fled in just a bath towel told the agency: "I was taking a bath and suddenly I felt a very strong movement and then I was scared and screamed.

"I'm very scared. I don't know if I'll sleep tonight. I'm worried about my daughter. I woke her up to take her outside and I didn't even put my shoes on," said 49-year-old resident Laura Villa.

The U.S. Geological Survey (USGS) said the quake, initially measured at a magnitude of 7.4 and later downgraded to 7.0, was relatively shallow, only 12 miles (20 km) below the surface, which would have amplified the shaking effect.

Mexican state power utility the Comision Federal de Electricidad said in a statement 1.6 million users had been affected by the quake in Mexico City, the adjacent State of Mexico, and the states of Guerrero, Morelos and Oaxaca.