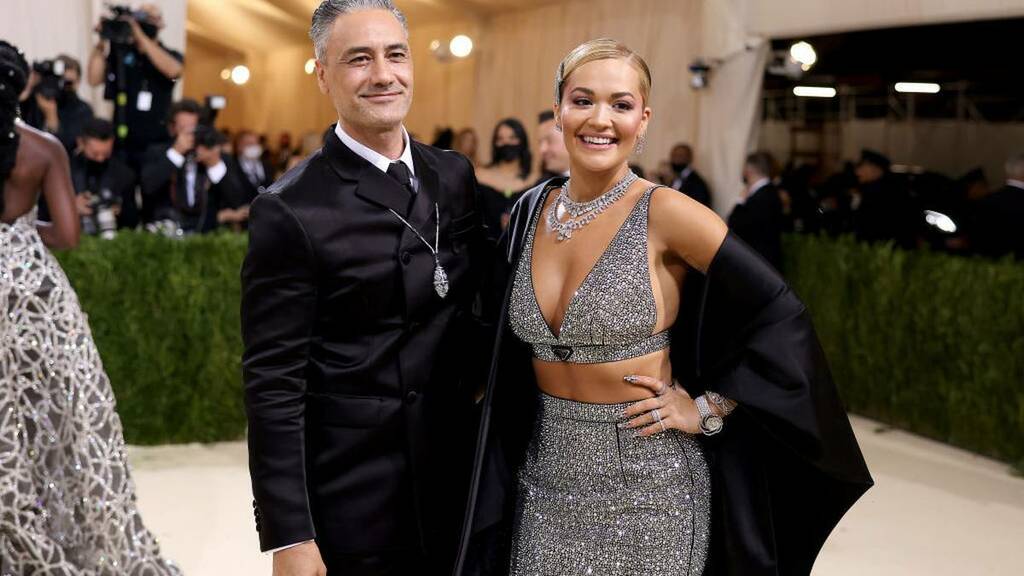 Taika Waititi and Rita Ora have arrived at the Met Gala and it's not their beautiful outfits that are turning heads.

The couple was spotted looking loved up on the carpet, and having fun for the photographers with The Tonight Show host Jimmy Fallon.

The pair also had a quick stop on the carpet to talk to Vogue host Keke Palmer, where Waititi gushing about being Ora's date.

Ora wowed in a sparkly two-piece by Prada with complementing diamond jewellery, breathtaking to say the least, but it's the ring on her engagement finger making us double-take.

Earlier this month the pair had fans speculating Waititi had popped the question after Ora posted an Instagram story.

Ora posted, then quickly removed, an Instagram story of her left hand showing off a hot pink manicure with rings on her fingers.

But her ring finger was covered up with a flame emoji, sparking rumours she was hiding an engagement ring.

The singer and Waititi, who split from his wife Chelsea Winstanley in 2018, first sparked rumours they were dating in April this year when Ora posted a series of photos of the pair on Instagram captioned: "Good times, memories, random things on my phone and the ones I love".

The couple were then spotted together at the RuPaul's Drag Race premiere in Sydney, where the director had been filming his next Marvel film Thor: Love and Thunder.

In August, they made their red carpet debut at The Suicide Squad premiere in Los Angeles. It was the first time they'd appeared on a red carpet together as a couple, reported People.

The pair walked the carpet holding hands at the premiere for the film, which stars Waititi as Ratcatcher.

And after today's appearance, it's safe to say the rumour mill will be in full swing as the couple are yet to confirm potential impending nuptials.