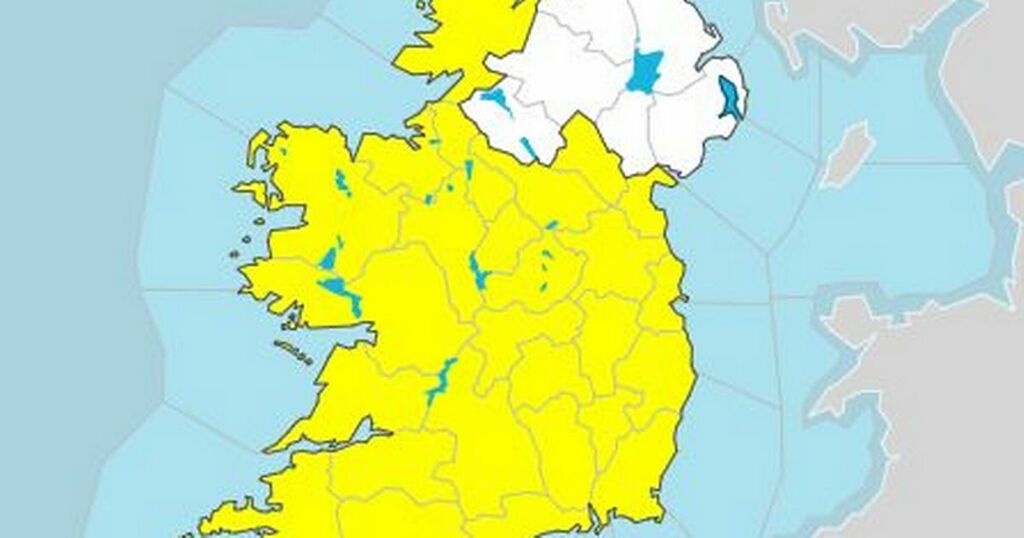 Met Eireann has issued an urgent weather warning as Ireland will be lashed with heavy rain and flooding.

A Status Yellow warning for rain and thunderstorm will be in place until 12 noon on Thursday.

A forecaster for Met Eireann said: "Scattered heavy downpours and thunderstorms are expected in some areas today (Wednesday), tonight and for a time on Thursday. Localised flooding may occur where the rainfall is heaviest."

Here is the forecast for the rest of the week:

"Warm and humid today with scattered heavy showers and localised thunderstorms, bringing a risk of lightning and spot flooding.

"There'll be long dry periods between the showers with sunny spells developing at times. Top temperatures of 20 to 24 degrees in light to moderate east or southeast breezes.

"Mist and fog will affect hills and coastal parts at times, particularly along the south coast."

"Further scattered heavy downpours overnight with a continued risk of localised thunderstorms and spot flooding. A humid and misty night with fog forming in some areas in mostly light breezes which will vary in direction. Minimum temperatures of 14 to 17 degrees."

"There'll be fairly widespread showers on Thursday, merging to give longer spells of rain at times. Further heavy downpours along with isolated thunderstorms will bring a risk of spot flooding.

"Dry periods between the showers with some hazy sunshine in places. Highest temperatures of 18 to 22 degrees with mostly light breezes but a fresh northerly breeze will develop along Atlantic coasts later."

"Scattered showers will continue into the night-time hours with some mist and fog setting in later.

"Another very mild and humid night with lowest temperatures of 13 to 16 degrees Celsius. Winds will be light and variable, though moderate to fresh northwesterly along Atlantic coasts."

"A day of sunny spells and scattered showers, some heavy across eastern counties later.

"Highest temperatures of 16 to 21 or 22 degrees Celsius, warmest in the east, with light northwest winds. Showers will become fewer overnight with long clear spells developing.

"A little cooler that previous nights with overnight lows of 9 to 14 degrees Celsius, in light to moderate west to northwest breezes.

"Feeling fresher with a mix of sunny spells and just well scattered showers. Highest temperatures of 15 to 18 degrees Celsius, in a light northwest breeze.

"Beginning cloudy with scattered outbreaks of rain. Sunny spells will develop into the afternoon with just well scattered showers and mostly sunny conditions to end the day. Feeling autumnal, in light northerly breezes, with highest temperatures of 14 to 17 degrees Celsius."