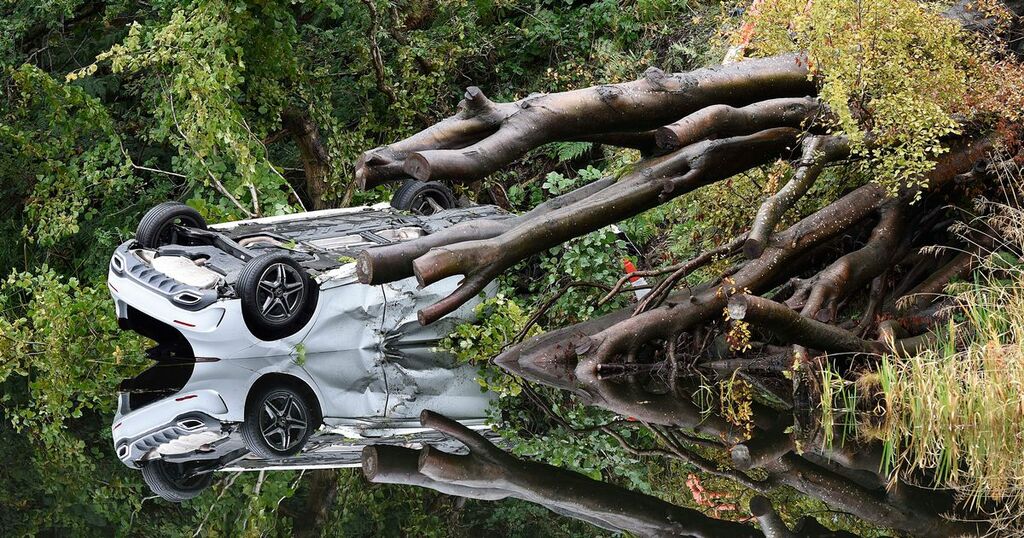 This is the moment a luxury Mercedes was pulled from a Scots canal after careering off the road and plunging into the water in a late night crash.

Emergency services rushed to Seabegs Road, at its junction with Greenhill Road, in Bonnybridge, Falkirk shortly after 9:30pm last night following reports a car had left the road and entered water.

Pictures from the scene today show the luxury Mercedes A-Class motor being pulled from the Forth and Clyde Canal, badly damaged with its windows smashed and boot wide open.

The incident sparked a huge mercy response with locals reporting up to 12 emergency vehicles at the scene of the horror smash.

As daylight broke the full extent of the collision could be seen - with the car laying on its roof partly submerged.

The 27-year-old driver was rushed to Forth Valley Royal Hospital in Larbert to be treated for his injuries.

He was later arrested and charged in connection with road traffic offences.

No-one else was injured or involved in the incident.

The road was closed for a number of hours while an investigation took place and until the vehicle was recovered.

But is has since re-opened to both traffic and pedestrians.

A Police Scotland spokesperson told the Record: "Around 9.40pm on Wednesday, 6 October, officers were called to a report of a road crash at Seabegs Road, near to its junction with Greenhill Road, where a Mercedes A-class car had come off the road and entered the canal.

"Emergency services attended and there was no one in the car. A search was carried out and the 27-year-old male driver was traced.

"He was taken to Forth Valley Royal Hospital to be checked over.

A 27-year-old man has been arrested in connection with road traffic offences. A report will be forwarded to the Procurator Fiscal."