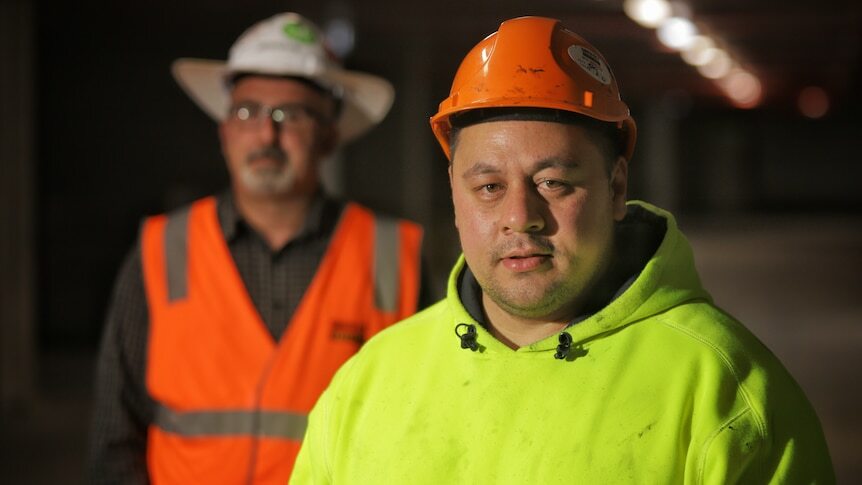 When father of five Jeff Tekii felt his mental health deteriorating a few weeks ago, he didn't know who to turn to for help.

"I would be at home crying, but I didn't want to burden my partner with the extra stress," he said.

"I thought about my kids and I just didn't want them to see me so emotional. I knew I needed to take steps as the longer you leave it the worse it gets."

His partner encouraged him to ask for help on the construction site through a program called Mates in Construction.

"It was hard, but I asked my supervisor, and straight away John Palleschi, who works as a connector for Mates in Construction, dropped everything and came to see me," he said.

"He looked me in the eye and said I am here for you and will be with you whatever it takes."

Mr Palleschi is trained to look out for signs in people struggling with mental health and offer them assistance.

"Jeff was having suicidal thoughts," he said. "He was at a low point and wanted help."

Jeff spent two weeks in hospital and is now on medication to manage his mood.

"Now, I have built those little steps forward, I can take a positive pathway."

But some people — particularly young men — in similar situations to Jeff don't get the help they need.

Looking for those 'flying under the radar'

In Australia, more than 3,000 people die by suicide each year and up to 60 per cent of people never actively seek support for mental health issues.

And it's the people who don’t reach out that Helen Christensen, from the Black Dog Institute, is aiming to help.

Initial research shows the majority of people with suicidal thoughts who don't seek help are men, with some young professionals struggling with issues such as gambling.

"We also have data from parents whose young children or adult children die by suicide, [and] it's very similar," she said.

By interviewing people like Jeff, researchers hope they can help those who fly under the radar.

"This is a group that people don't look at," Professor Christensen said. "And just think of the potential that being able to do something with this group might have for reducing our suicide rates by 25 per cent or so.

"We can work out what motivates them, how they go about thinking about these things, and what potentially they think might stop them from actually doing that next step."

Any services or help designed for this group would be lead by people with lived experience of suicide, she said.

"They will take the information we've collected and look at what they think the type of pathway or support or activity is required," she said.

Bob Sheridan knows what it's like to fly under the radar while struggling with suicidal thoughts.

After dealing with memories of childhood sexual abuse, in 2017 it was a friend speaking up and asking him if he was OK that saved his life.

"I contemplated suicide, I thought about it," he said.

"I was a mess and the phone rang.

"We talked for ages and I felt safe," he said.

"And I went to the doctor the next day to get help. I'm a lucky guy. I have a good family, good mates and it's been a positive experience for me."

He's now a lived experience ambassador for the Black Dog Institute and says it's important to have a way of helping people who don't usually seek help.

"I didn't want anyone to know. I felt ashamed. But for me, somebody at the right time asked me the right questions," he said.