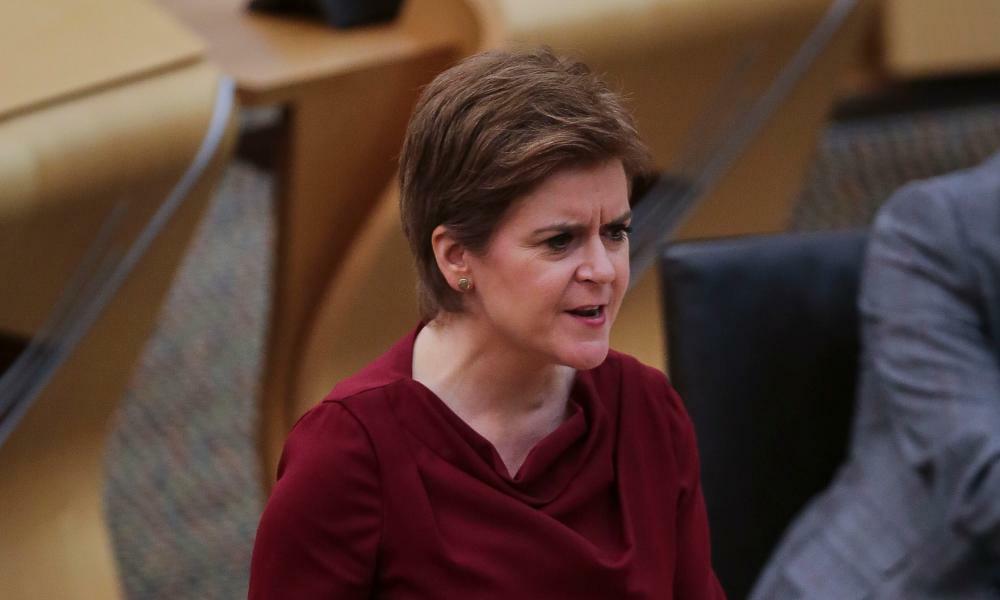 Men across Scotland must challenge themselves and one another over misogynistic behaviour, Nicola Sturgeon has said, as she called for events of the past few weeks to mark a turning point “where we stop expecting women to fix these problems, and put the full glare where it belongs, on men who behave in a deeply unacceptable way”.

Sturgeon was responding to a question at first minister’s questions on Thursday about Rhona Malone, a former firearms officer who was found by an employment tribunal to have been victimised by Police Scotland colleagues in a “horrific” workplace culture condemned as an “absolute boys’ club”.

The Scottish Labour MSP Daniel Johnson asked if further investigation was needed into the culture within Police Scotland.

Commending Malone’s bravery, Sturgeon said the tribunal findings “should trouble all of us” and welcomed Police Scotland’s subsequent statement pledging to act on them.

But she went on: “It’s really important that we do not assume any case like this is necessarily an isolated incident. And secondly, that we do not assume that any organisation in our society, however well respected, is somehow immune from the misogynistic culture that pervades our whole society.”

Sturgeon told MSPs there had been “too many painful reminders” in recent weeks of the spectrum of abuse that women experienced, from inappropriate comments through to discrimination in the workplace through to violence and serious sexual assault.

“I hope we are finally at a turning point where we stop expecting women to fix these problems, and we put the full glare where it belongs, on men who behave in a deeply unacceptable and misogynistic way.”

To applause from across the chamber, she concluded: “I would say to all men in this chamber and all men across the country: challenge it if it’s on the part of other men that you know, challenge your own behaviour, and then let’s collectively turn the corner so that women can live free of the fear of harassment, abuse, intimidation, violence, and in the worst cases, death.”

Her remarks come amid ongoing institutional soul-searching about how best to tackle street harassment and violence against women following the deaths of Sarah Everard, Sabina Nessa and countless others. In Scotland, Malone’s case, which concluded earlier this week, has likewise heightened concerns about sexism within the police force.

A Scottish government working group led by Helena Kennedy is considering whether misogynistic abuse should be a separate crime, and last weekend the Scottish justice secretary, Keith Brown, said he believed such a move would be a “very important signal that these behaviours are not acceptable in society from men”.

There have been calls for similar legislation in England and Wales, spearheaded by the Labour MP Stella Creasy, and in March the UK government announced it would require police forces across England and Wales to collect data on crimes apparently motivated by hostility towards women.

This week, Boris Johnson said he did not support calls to make misogyny a hate crime, saying there was “abundant” existing legislation to tackle violence against women.