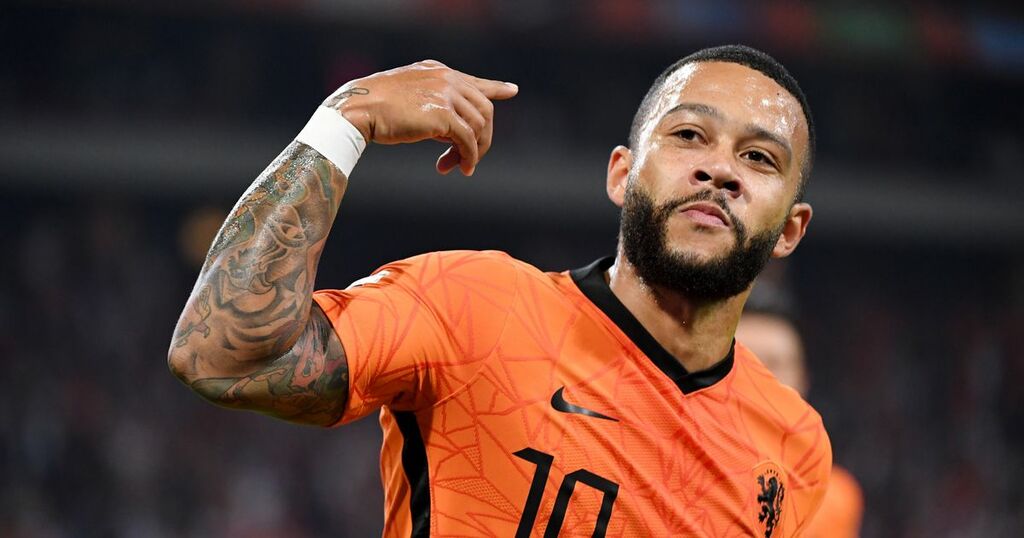 Memphis Depay continues to resurrect his career after equalling a Dutch goalscoring record on Tuesday night.

The Barcelona new boy scored in the Netherlands' 6-1 win over Turkey as they took control of their World Cup qualifying group.

It takes his haul for the year to 12, a record previously held on a solo basis by Patrick Kluivert.

Depay's displays and exploits seemed unimaginable during his spell at Manchester United.

The narrative was set - the Red Devils signed a young, talented Dutchman, pipping PSG to his signature and handing him the No 7 shirt.

That was about as good as it got as Depay struggled to make an impact at Old Trafford.

He scored seven times in 45 outings before Louis van Gaal was sacked and his successor, Jose Mourinho, offloaded him six months into his reign.

Upon reflection the striker said: "I lost a bit of confidence and I lost the confidence of [Louis] Van Gaal and his staff. It was hard for me. The following season I felt like I had more experience, but they changed the coach.

"Jose Mourinho came and I fought to get into the team but I think the idea of giving me a chance was never in his head. He never gave me an opportunity. Never."

Since then though Depay has rebuilt his reputation in France with Lyon.

He grew in stature throughout his five seasons at the Ligue 1 outfit, with greater responsibility bringing out the best in him.

The Dutchman twice surpassed the 20 goal barrier, something he hadn't done since his PSV days.

His confidence and audacity was highlighted with a panenka penalty in the 2020 Champions League knockout stages against Juventus.

Depay pushed for a move to Barcelona last summer as their interest became clear but Lyon refused and had to accept losing him for nothing this summer.

The 27-year-old is one of several free agents to join the Catalans and he had his sights set on playing alongside Lionel Messi.

"I'm very much looking forward to playing with him, his quality is undoubted," said Depay at his unveiling.

"I have to just make my runs and I know the ball will come.

"Because he has too much quality, he can do everything with the ball. I think everybody in the world would like to play with someone like that."

His hopes were dashed when it emerged that Barcelona couldn't afford to keep Messi.

PSG have since signed the Argentine but Depay is looking to show that he can fill the void, already scoring twice in three games for the Catalans.

With his national side, again coached by Van Gaal, the Barcelona new boy assumes a leading role, which seems to bring the best out of him.

He has scored 12 times in 2021 for the Oranje, equalling the number scored by Kluivert in 2000 as he bagged five times at that summer's Euros.

Depay also levelled the legend Johan Cruyff on the all-time top goalscorers list for the Netherlands.

His tally now stands at 33, and he is just two behind Ruud van Nistelrooy, but Robin van Persie still leads the way on 50 ahead of Klaas-Jan Huntelaar and Kluivert, respectively.