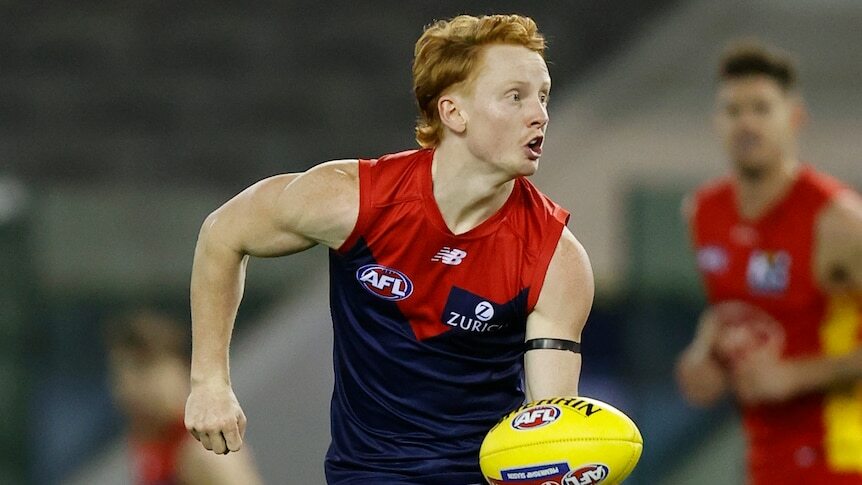 Jake Bowey has played only six AFL games, each one of them ending with a rendition of the Demons' club song, It's a Grand Old Flag.

His seventh match will be a grand final on Saturday week.

There will be butterflies without panic, because this teenager was made for finals footy.

His first sensational premiership tilt was in 2013. It started with a knockout semi. He was 10, playing for the fourth-placed Highett Bulldogs in the under-11s, taking on the top side East Malvern.

Jake, who turned 19 last Sunday, recalls a stirring pre-game address given by his coach and father Brett.

"Obviously it's awesome having your dad there," he says now.

Brett Bowey told his charges they had the "best midfield in the comp", and it would carry them to victory.

His spot-on words of encouragement were fuel for three consecutive upsets.

A photographer captured the moment father and son held up the cup. Later that day, Jake took his turbo speed into another grand final, this time for the under-12s, and won yet another flag.

By now, onlookers realised the red-headed son-of-a-gun was a class above.

Of course, Brett Bowey knew the game as well as anyone.

He played 85 games in the number 18 jumper for St Kilda from 1988 to 1994. His debut was also future champion Robert Harvey's first go at it.

During those seasons, "Bowser" celebrated only one September victory: the 1992 elimination final against Collingwood. The stocky rover collected 27 possessions as one of the best players on Waverley Park.

The Saints' stars in 1992 were Harvey (a 21-year-old best and fairest), full forward Tony Lockett (132 goals), and captain Danny Frawley, who got injured in the win against the Magpies.

St Kilda lost to Footscray the next week.

After his seven years in the big time, Brett joined Frankston in the VFA, where his athletic brother Matthew was playing. He finished his career in the Mornington Peninsula league.

In 2000, he led Chelsea Football Club to a premiership as a revered playing coach.

Brett was a standout in every centre square he graced: his trademarks were quick hands, sublime long-range kicking, and clear thinking.

Jake has not seen too much of his old man in full flight, although there are some VHS tapes of matches from the late 1980s.

"They don't come out that often," Brett insists.

"I think there's a Brisbane game at Carrara, [that] might've been my third game."

That's not how Jake sees it.

"He's got a lot on tape that he wants the whole family to watch," he says.

"Occasionally he sends a video on YouTube into the family group chat to tell us how good he was.

"Me and my close mate used to call him the stepladder — because Nicky Winmar took a few hangers on him."

Jake always had more than one family role model.

Brett's sister Belinda is a legend of the Victorian women's league.

She turned out for St Kilda Sharks as a 17-year-old (wearing 18) in the state competition's inaugural season (1992) and set record after record, playing more than 350 matches.

Belinda invited her nephew to run with her through her 250th game banner.

She played for Collingwood in the VFLW this season and would have been in the grand final against Geelong if it hadn't been cancelled due to the fourth COVID-19 lockdown.

Suddenly there was no football in Victoria; only the AFL was still going.

About the same time, Jake played his first game for Melbourne, the best team in the country.

He collected 13 possessions against Gold Coast in his debut, barely making a mistake, displaying all his family traits.

Road to the draft

Jake Bowey's pathway from the under-11s to the AFL was typical of most exceptional juniors, although he was aware friends of friends doubted he was big enough to go all the way.

"He was always tiny," his mother Dee remembers.

"But he was good. He knew no fear and always played up [an age group]. I didn't know whether he could [play AFL] … but Bowser used to say, 'He's better than me.'"

"He was super-competitive," Brett says.

"Clean hands, good disposal. I thought [as a junior player] he had me covered, so if I played [in the AFL], well, he's definitely got more attributes than I had. And he was going to probably make it if everything panned out.

Jake thought the same way (it was also a relevant fact that Richmond was carving up the AFL with its band of speedsters under 180cm tall).

"The game hasn't changed too much since [Dad's time]," he says.

"Whenever I had a bad game or thought I didn't play well, I went to her and she got me through it, cheered me [up]. So they both played a pretty big role."

Alongside his peers, Jake spent 2020 not playing football because of COVID-19 while finishing his schooling at Cheltenham Secondary College in bayside Melbourne.

He has shattered the modern football myth that teenagers should take up scholarships to attend private schools as an AFL prerequisite.

"He knew that if he was good enough, you get picked up from anywhere," Brett says.

"It doesn't matter if you're private school or state [school]."

Jake wanted to remain in a familiar environment.

"I wanted to stay with my mates," he says.

"And I knew to make the AFL from Cheltenham Secondary College would be awesome."

The school's football coach Adam Collings remembers Jake playing in a carnival against an Adelaide-based team when he was in year 9.

"He was playing against 18-year-olds.

Collings praises his former student's character above all else.

Other teachers, including several one-eyed Melbourne supporters, have been joyful at Jake's rise.

"You can't help but be proud of him taking this opportunity with both hands," Cheltenham Secondary College year level coordinator Krystal Herridge says.

"Watching Jake play VFL and then fit seamlessly into the AFL side in his first year — playing finals, hitting targets consistently, playing clean footy and excelling at his dream."

When he was picked up by Simon Goodwin's outfit last year at number 21 in the national draft, Demons recruiting manager Jason Taylor told the senior coach: "He could be a Sam Mitchell-type mid[fielder], too. His movement, [his] kick and that."

For now, Jake is stationed in the Demons' backline, under the guidance of defensive coach Troy Chaplin.

His preliminary final performance against Geelong offered further evidence of his composure under pressure.

With eight minutes to go in the second quarter, he surged from half-back, received a handball, and kicked the ball to Ben Brown.

The angle of the pass was particularly brave, but it led to a goal from another emboldened youngster, Kysaiah Pickett. The whole passage was demoralising for the aging Cats.

On grand final day, the Bowey family and friends will be at home shouting to Jake though their TVs.

"I keep thinking that's our boy. But he's never been a panicky kid. He gets it [the ball] and goes. He's always found space."

Brett says it's a shame the family can't be in Perth.

But they will be with Jake in spirit.

"It's unbelievable — I wish we could go to [the] game," Brett says.

"[Before this year] I've never missed one of his games, ever. Anyway, that's the world we live in I suppose.

"I'm just with him, riding every kick and bump."