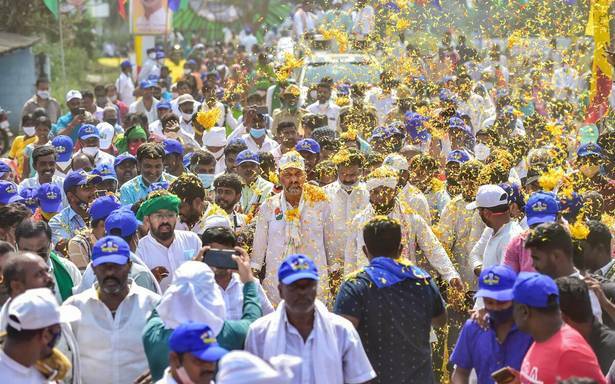 While Chief Minister Basavaraj Bommai said the government will not discriminate while taking action, the Congress accused the government of attempting to curtail the padayatra.

“There will be no differentiation between those violating COVID-19 norms whether he is a common man or a big leader. Action will be uniform,” the Chief Minister said. Stating that precautionary measures are necessary, Mr. Bommai said that Karnataka had already reported 12,000 cases by January 9 evening, including 9,000 in Bengaluru. “Positivity rate in Karnataka has risen to 6.8%, and it is 10% in Bengaluru. Karnataka is in the third spot in India in COVID-19 cases.”

Justifying the FIR, Home Minister Araga Jnanendra said that Congress leaders were playing with the lives of the common man. “The Congress is playing politics, and it is not genuinely interested in the water. Our concern is public health. Congress will have to take responsibility if people get into trouble.”

In Shivamogga, Rural Development and Panchayat Raj Minister K.S. Eshwarappa termed the refusal of Mr. Shivakumar to undergo the test as ‘goonda behaviour’. Speaking to reporters, he said that he had heard about the brazen behaviour of Mr. Shivakumar, but witnessed it on January 9 night.

Defending his decision not to undergo the test, Mr. Shivakumar told reporters in Kanakapura that the government intends to create trouble. “The health official came to test me and declare me as COVID-19 positive. Am I showing any symptoms? I am fit enough to walk 15 days. Come with me and see.” He said that the government intends to blame the Congress for rising numbers

Leader of Opposition Siddaramaiah, who had dropped out of the padayatra midway on January 9 after complaining of uneasiness, did not take part in the padayatra on January 10 after doctors advised rest since he was running a temperature.