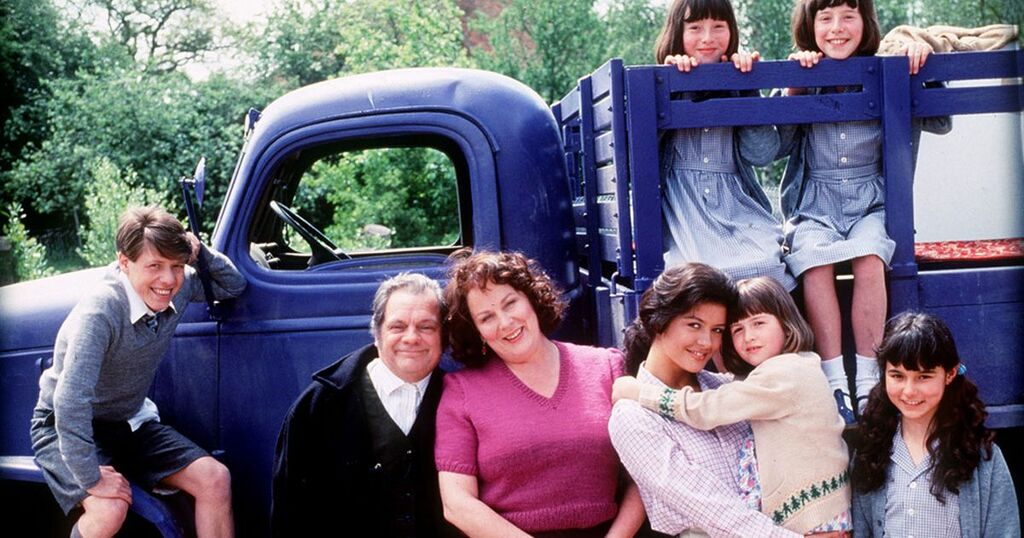 Dollops of the creamiest Kent ice cream oozed down towering cones and sticky fingers in the dazzling English sunshine.

“Perfick,” whooped Pop Larkin, flinging bulging bags of salty crisps at his ramshackle brood as they squealed in the back of his battered farm pick-up truck, scoffing their spoils.

Messy, joyous and heady on life. This was our introduction to the Larkin family when the much-loved Yorkshire Television adaptation of HE Bates’ 1958 novel The Darling Buds of May first aired on ITV in April 1991.

Starring Sir David Jason as Pop, Pam Ferris as Ma, Philip Franks as Charley, and a 20-year-old Catherine Zeta Jones, as eldest daughter Mariette, it enchanted viewers with its nostalgic nod to a time when the sun always shone.

It captivated its youngest stars, too. “I just remember being in the back of that truck eating endless ice cream – it was heaven,” laughs Steph Andrews, 39, who played youngest daughter Victoria Larkin at the age of eight.

“That first day of film-ing was just ice-cream. I thought ‘Is this a job?’,” says Chrissie Giles, 41, who at 10 played cheeky Petunia Larkin alongside twin, Katie, as sister Zinnia.

On Sunday a new adaptation, The Lar­­kins, starring Bradley Walsh as Pop, will air on ITV, promising to be every bit as uplifting as the 90s version.

But memories of filming that first adaptation, which ran for three series, will always hold a special place for the original Larkin kids.

“I just remember us being told to roll around in the mud so we looked dishevelled,” recalls Julie Stitchbury, 43, who at 11 played second-eldest daughter Primrose in the first series, before older actor Abigail Rokison – now a senior lecturer at The Shakespeare Institute – was brought in for more grown-up storylines.

The younger children were picked because they weren’t trained actors.

Adverts were placed in Kent newspapers and scenes were filmed in a village near Ashford. Steph said a letter sent to her school appealed for “lively, outgoing kids” with “natural Kent accents”.

Meeting David Jason was an immediate thrill. “I remember the phone call to tell us David was going to be our dad,” smiles Katie. “My big sister was shouting ‘Oh my god, Del Boy is going to be your dad’ and we all screamed.”

On set, he didn’t disappoint. “He joked around, knocking people’s hats off,” she says. “When they called ‘All artists to the sets’, he’d joke: ‘Artists... and the twins!’.”

Chrissie recalls him showing up in “a snorkel and flippers” for the scene where he and Pam eat a fry-up naked in the bath. “I remember him waddling in and everyone cracking up.”

Julie remembers his trousers splitting in a scene where the farm shed burnt down. “In rehearsal we heard this massive tear, everyone was hysterical.”

He was kind, too. When the cast travelled to Brittany to film a French holiday, Julie had her biggest scene with David and was nervous. “He was so nice, he came to my dressing room and sat and rehearsed it with me.”

The holiday was especially fraught for her as she caught chicken pox.

“I had to miss some days filming in the UK so they had to joke in the show that Primrose was in the bath. I was then given the all-clear to travel to France but I was covered in scabs so it had to be written into the script.”

Julie recalls: “Pam, David and Catherine were so lovely in ­giving me cuddles.” Pam was, they all recall, Ma Larkin in ­reality, dishing out hugs regularly.

“She loved cats and brought me in a picture book of kittens,” says Steph, who is now an occupational therapist with the NHS but still lives in Kent.

Her family’s farm is “not a million miles” from the Larkins’, she laughs.

Catherine acted like a “big sister” to the kids. “She gave us postcards between series and a Biggles teddy bear when we went to France,” says Chrissie, from Guildford, Surrey, and now a journalist. “Even as 10-year-olds we were like, ‘She’s incredible’.

“Once we had Smash Hits magazine on set. Catherine had just released a single and there was a poster of her in it. We ran up to her and she was really excited, she found it funny.”

Food dominated filming, which was not much fun for vegetarian Pam, explains Julie.

Still living in Kent, Julie is the only one of the kids to go on to work in TV, first behind the scenes and later as a checkout girl on Dale Winton’s Supermarket Sweep. She now works in a GP’s surgery.

“I remember a scene where we had to feed the geese and the next thing me, Steph and Pam were sitting there plucking them. They were still warm. We ate them as well. I remember eating a lot but a lot of it was cold by the time you’ve done take after take.” Life filming wasn’t always as blissful as it looked.

“Filming the rain scene in France we all had to get in the showers in our clothes,” remembers Chrissie.

It could be precarious, too. The twins had a scene where they had to climb out of a boarding school roof. “Everyone was worried about our safety but we were used to climbing trees,” says Katie, from London, who now specialises in medical law.

Ian Tucker, who played son Montgomery, was born with cystic fibrosis and despite an early career in theatre and TV quit acting to study English.

Between David’s jokes, Pam’s cuddles and Catherine’s care, the four women can only recall a warm, family atmosphere on set.

“I remember sitting in Pop’s Rolls-Royce on Philip Franks’ lap, driving down country lanes singing 1950s songs,” recalls Katie. “It felt like a real family, all crammed in, having a laugh.”

As viewers, we wanted to join them. No doubt a new generation will too.

* The Larkins, Sunday on ITV at 8pm