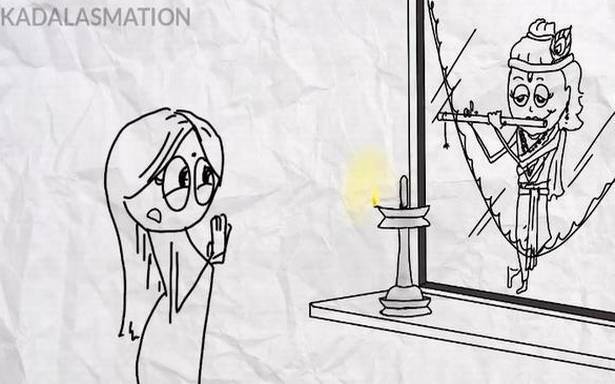 They reach for the same book, Love and Love Only, at a book store, and it is love at first sight for Sudhi and Mini. As the song ‘Oru rajamalli’ plays in the background, he gives her the book, and walks away. This is a scene from the cult Malayalam romantic movie, Aniyathipravu, starring Kunchacko Boban and Shalini as the lead characters.

Now let your imagination run wild. What if they get into a fight? And can you make a connection between the book and Monson Mavunkal, the infamous fraud antique dealer from Kerala? Young animator Visakh VM has done this, much to the delight of social media audiences, in his latest animation spoof video.

There are many such gems on his YouTube page ‘Kadalasmation’ (coined from the words ‘kadalas’, meaning paper, and animation) that has 139k subscribers. These 2D animation videos, which are going viral, are spoofs of popular scenes from movies, most of them Malayalam.

The most watched video is based on a scene from Meesa Madhavan (897 k views). The hero, a thief, sneaks into his rival’s home to steal some documents and manages to get hold of the heroine’s gold ‘aranjanam’ (waist chain) while she is sleeping. In the spoof, the heroine wakes up and shoots the thief.

Another viral video is on a scene from Nandanam, a romantic fantasy tale about Balamani (Navya Nair), an ardent devotee of Lord Krishna. There is a scene where Balamani breaks down before the photograph of the deity saying she would never light the lamp for Him. In a mother of all twists, the deity gives her an earful and blows out the flame! “Navya had shared it on her social media page. That was a big validation for me,” says Visakh, a mechanical engineer.

Kadalasmation was born a year ago, during the lockdown. Visakh was all set to move abroad for a job when the pandemic upset his plans. “I love to draw and am a self-taught animator. I decided to try something new, so I started experimenting with 2D animation spoofs. Had I gone abroad, the dream wouldn’t have materialised this soon,” says Visakh, 26, who comes from Haripad in Alappuzha district.

He says they is no particular strategy involved in selecting the scenes he works with. “The idea just comes, mostly after repeated watching of certain movies or scenes. But there is no guarantee that it happens always. So I don’t watch films or sequences with the purpose of making a spoof,” he says.

Once he finalises a scene, a story board is made. Animation work comes next and it involves several steps, right from making the first set of drawings. “Then I do a rough animation to finalise the timing and spacing before moving to the final clean-up stage,” he says.

As a freelance animation artist, he hopes to develop the art. Admitting that it is time-consuming work, he says, “It is a long, tiring process because I don’t have a team. So after one work is uploaded, there is a long break before the next video is out. Even if the video is one minute long or less than that, it takes at least a week for me to make the final product,” he says.

So why does he do it, we wonder. “In spite of the challenges, what drives me is the wish to see the final product. I want to enjoy it and want others also to enjoy it!” he says.

The page has videos on scenes from Aaram Thampuran, Kaalapani, and Baahubali, among others. Visakh has also posted short animation videos and illustrations.