When she was 13, Gracie Abrams uploaded a cover of “Waiting Room” by Phoebe Bridgers to Soundcloud. “It was the first thing I ever posted on the internet, and it was so s****y,” she laughs. “It was literally me recording into the computer speakers.” In October last year, almost a decade later, Abrams opened for Bridgers in Austin, Texas. The two musicians shared a bedazzled cowboy hat on stage.

It was the latest in a series of pinch-me moments for the 22-year-old Californian. With the release of her debut single “Mean It” – a soft and sparse death knell for a dying relationship – in 2019, the LA-based Abrams invited listeners into her world of bedroom pop melancholia. While the careers of other aspiring musicians were imperilled to various degrees by the pandemic, hers flourished. She released two acclaimed EPs, at the same time almost doubling her Instagram following. In April this year, she opened for her close friend, Olivia Rodrigo, and is currently in London, midway through her own international headline tour. Along the way, Abrams has picked up famous fans beyond her father, the director JJ Abrams of Star Wars fame. Lorde, Post Malone, Billie Eilish, and Taylor Swift are all vocal Gracie stans. And Bridgers too, of course.

Like Bridgers, Abrams finds power in specifics. In her lyrics, she laments that her boyfriend’s house is “in Glendale or somewhere far”, and thanks her brother for the fact that she will “at least never turn to cigarettes”. Her candidness is undoubtedly a factor in her ability to connect so fully with her listeners. Yet an inevitable result of baring your soul to millions of strangers, is that the person you’re singing about is likely to hear it too. And heartbreak, after all, is a two-way street.

“I’ve been trying to figure out how to be as honest as possible while also maintaining the deepest respect for the people in my life,” Abrams tells me, sitting in the green room of Islington Assembly Hall where she will perform in a few hours. “Selfishly, songwriting is my own personal outlet, and so to make it public in any way whatsoever, you risk hurting [someone’s] feelings.” As the rooms she plays get bigger, the dilemma of how to remain honest while remaining mindful of others has grown more and more difficult. Sometimes, it has put her off releasing a song altogether. “I guess I’m just trying to be a good person given the outlet that I’ve chosen, so I’ll approach the people I’m writing about to check in with them,” she says. “I’ve got to do a lot of that this year.”

Her writing process has changed while on tour. “It’s tough to get alone time and you don’t want to be the person who whips out a guitar in the middle of a group hang,” she says, wincing. But jotting down a line here and there on the road is far from her ideal writing scenario. Abrams loves to write in nature, somewhere surrounded by mossy trees and long grass. The sound of birdsong. More specifically, it’s at Long Pond, the studio in upstate New York owned by The National’s Aaron Dessner, where Taylor Swift and Bon Iver have previously recorded and where Abrams visited for the first time last year. As she describes Long Pond now, her voice becomes wistful. “It’s just magical. There’s something really grounding about having Aaron’s seven-year-old son walk into the room mid-writing, and going on nature adventures with his family. It broke my world open, for sure.” The experience reminded her how nourishing it was to be away from the city. For her writing, for her anxiety, for all of it. “I want to be somewhere where I can hug a tree or some s*** like that.”

Abrams was born into a Hollywood family. Her mother, who married JJ Abrams in 1996, is Katie McGrath, the film and TV producer who co-founded the gender-equity initiative Time’s Up. Neither are involved in her music career. “Except for the fact I call my mom at least five times a day on tour,” says Abrams. “In previous years, I’ve tried really hard to keep them as far away as possible, and they’re really respectful of that. I definitely was really insecure at the idea of anyone thinking that…” She pauses for a moment. “I was afraid for people who didn’t know me to know that my dad works in entertainment.” With age, though, Abrams is learning to collapse the walls a bit. “The older I’ve got, the more I see my parents as people and not just my parents. I should have asked them for advice more often than I did.”

Abrams grew up surrounded by miniature R2-D2s and strange paintings of “otherworldly s***”. In her dad, she witnessed an adult who had managed to maintain a childlike love of storytelling. Around the house, he played Elvis Costello, and Hall and Oates. Her mum prefers Joni Mitchell and Carole King. On the inside of her forearm is a tattoo that says “River” in Mitchell’s handwriting, a tribute to her favourite song. The word is surrounded by other tiny inkings. Tomorrow, Abrams tells me, she’ll be getting another: “Two dancing ladies.”

Given the diaristic intimacy of her music, it’s easy to define Abrams’ albums as “eras”. Minor is a break-up record, for example. The EP, which she worked on with producer Joel Little (known for his collaborations with Taylor Swift and Lorde), flits between earth-scorching or unbearably tender farewells to an ex. “That was definitely a very reactive record to a specific experience,” she says. The emotions of her second EP, This Is What It Feels Like, released a year later during the pandemic, are messier. “I was really struggling at the time that it came together and I can hear that in what I wrote,” says Abrams. “I was just crushed by my anxiety every day. It’s funny now to think that album came out in the middle of that, because music means the most to me when I feel alive. I [didn’t feel] that way then.” It’s also funny, she adds, “to have been encouraged to release music at a time when I likely would have benefited from solely writing for myself – not thinking about how anyone else will perceive this”.

She finds comfort in the close relationship she has with her fans. Her dressing rooms are regularly filled with gifts they send her, including a framed photo of her dog, Weenie, and a Lego Harry Potter kit, because she once said that the toy bricks help alleviate her anxiety. As is natural for any Gen-Z star, Abrams uses Instagram to interact with her fanbase. On tour, there is also the option for listeners to purchase an add-on that lets them sit in on soundchecks where they can ask Abrams anything and everything. “Nothing is off the table,” she says. “It’s really nice to be able to talk with people who feel like my peers about stuff that’s so real for them and me. [Those soundchecks] feels like an opportunity to understand our generations a little better.” Although Abrams is a self-confessed introvert, she is outspoken on certain topics. Last year, in lockdown, she was loudly pro-vaccine. In May, when a leaked draft from the Supreme Court revealed plans to overturn the Roe v Wade ruling that legalised abortion in the US, she was loudly pro-choice. She was abused online for both stances but, surprisingly, found the criticism easy to ignore. “The s**t I post about politics, I find so fundamental that it’s like, ‘Yeah, you can go off in the comments. My views will not change.’” Plus, she adds, “I just think that it’s such a shame to have the eyes and ears of our future voters right there and not try to be like, ‘Ok, let’s think about this.’”

And so she makes the most of her platform. At a sold-out gig, the crowd – dressed in fluffy robes and slippers because Abrams decided she wanted to throw a pyjama party – match her lyrics word for word. Groups of friends embrace, while mums and daughters sway side by side. “People are curious to find themselves in songs now,” says Abrams of the recent changes to pop music’s landscape. Certainly, these fans tonight have found themselves in hers. 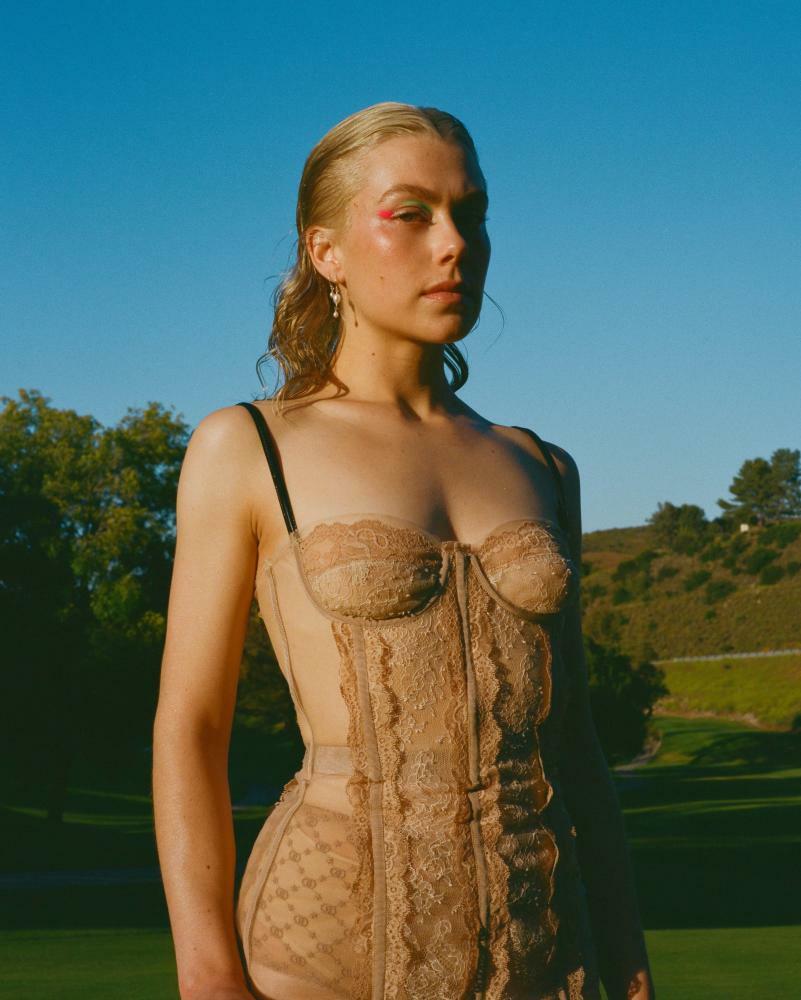 Phoebe Bridgers on Taylor Swift, her boyfriend Paul Mescal and speaking out on Roe v Wade: ‘I want to show everybody what I believe in’
As the indie superstar makes her Glastonbury debut, she explains why she is much more than just the ‘patron saint…

The Guardian - UK
One subscription that gives you access to news from hundreds of sites
‘F*** the Supreme Court’: Phoebe Bridgers condemns ‘irrelevant old motherf***ers’ over Roe vs Wade decision

‘Women are losing rights for their bodies, so why are we talking about celebrities’ divorce trials?’