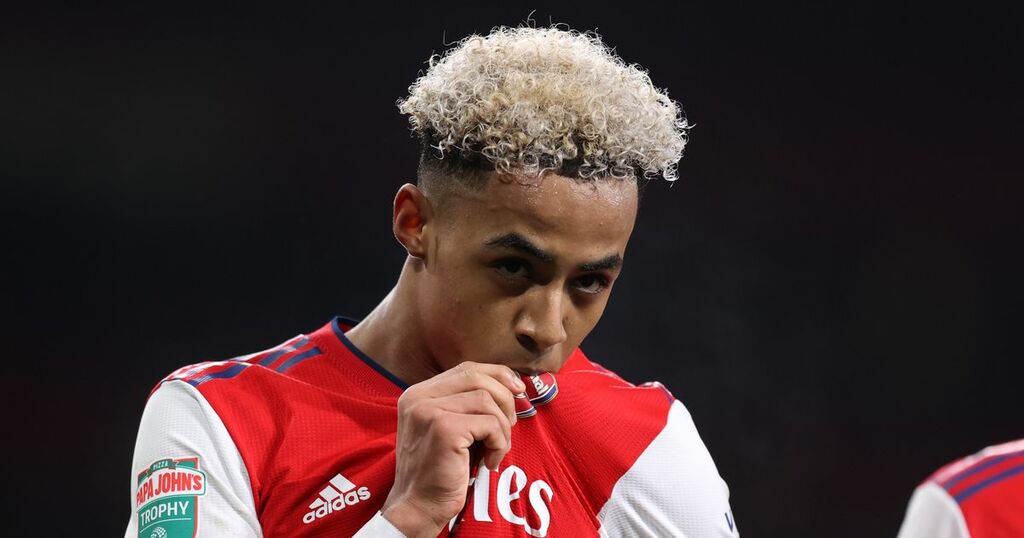 Arsenal 's kids made history on Tuesday evening by becoming the first-ever academy team to reach the EFL Trophy quarter-finals after their commanding 4-1 victory over Chelsea U21s.

No other side has been able to manage that feat since Premier League academies were welcomed into the competition back in the 2016/17 campaign.

But it was Hutchinson, a youngster who has already been dubbed the 'next Bukayo Saka ', who stole the show and helped light up a cold, dreary night at the Emirates.

The 18-year-old is the latest star to emerge from the Gunners' seemingly never-ending conveyor belt of talent this season.

Here's everything you need to know about Arsenal's latest bright young star after his match-winning display on Tuesday night...

Join the debate! Where do you think Arsenal need to strengthen in January? Let us know here.

Hutchinson was actually on the books of Charlton Athletic for two years as a youngster before he headed to north London to link up with the Gunners.

Arsenal were aware of Hutchinson's talent from an early age, but Charlton's demand for £6,000 in compensation scuppered any chance of the 10-year-old being snapped up after his spell with the south London club came to an end.

After spending a couple of years playing with his friends and honing his skills by playing futsal in an extended break from academy football, the Gunners came calling to invite Hutchinson in for another trial at the club.

Hutchinson's futsal background was evident again on Tuesday night after some nifty footwork allowed the youngster to grab his explosive goal. And the youngster has opened up before on how futsal helped him develop his technique during his break from academy football.

“Having that time off really helped me develop as a kid because there was less pressure,” Hutchinson told Goal last year. “I was just working on myself, doing my thing at futsal.

“I worked on my technique and my weaker right foot. It really helped.”

Hutchinson impressed and was immediately offered a contract to link up with Arsenal's U12s, initially as a left-back.

But it wasn't long before his dribbling ability saw him nudged forward into a move advanced position to wreak havoc on others rather than being tasked with defending himself - just like Saka.

After settling down in Arsenal's academy, it didn't take long for Hutchinson to step into the spotlight.

“We finished the tournament and all the teams came round in a huddle, and the F2 Freestylers came out and started showcasing their skills," Hutchinson recalled.

“They asked one member from each team to come out and do a skill and all the boys were saying ‘go on Omari, go on!’

“So I went up there and did it. They gave me the ball and I just started doing my skills. When we got a picture with Pele afterwards, he said something like ‘that was amazing’ in his Brazilian accent.

“Then later on that night, Jeremy Lynch from the Freestylers called my mum and said he wanted to do a video with us.

“So I did the video and it just went viral from there.”

Arsenal wonderkids : 5 youngsters who could save the Gunners millions in transfer fees

Over the past few years, Hutchinson has excelled moving up through various age groups before he was promoted to the Gunners U23 squad this season after penning his first professional contract last year.

The teenager excelled during his sole campaign with the U18s, netting seven goals and eight assists.

Hutchinson's ascent has shown no signs of slowing down after being fast-tracked into a more senior age group this year, either.

He was nominated for August's Premier League 2 Player of the Month award at the start of the campaign and has already been involved in nine goal contributions this year as he excels in a new central attacking role.

By making the step up seamlessly, Hutchinson has, as a result, seemingly thrust himself onto the fringe of Mikel Arteta's first team plans.

Just days before his match-winning display against Chelsea U21s, Hutchinson was on the bench for Arsenal's shock FA Cup exit at the hands of Nottingham Forest on Sunday.

After another stunning display for Kevin Betsy's U21 sides in the EFL Trophy, it's beginning to feel like it's only a matter of time until Hutchinson muscles in on a senior spot.

Despite his stunning progress this year, it's been a relatively challenging campaign for Hutchinson.

The England under-19 star was struck down with injury and COVID at the start of the season to temporarily curtail the fine start he'd made to life at U23 level after his summer promotion.

The presence of Folarin Balogun and Eddie Nketiah, who both dipped into the squad after a lack of minutes at senior level, proved to be a further, albeit unexpected, setback for Hutchinson.

But the teen sensation has shown real character to come roaring back in recent weeks.

Whilst fans have been clamouring for Arteta to hand Charlie Patino a more prominent role in recent weeks, it now seems that the diminutive playmaker could be upstaged by Hutchinson.

With his incredible versatility and technical excellence, it's no surprise that Hutchinson has been mentioned in the same breath as Saka by some within the club.

And it may not be long until he's lining up alongside him, too.