The Mediterranean has become a wildfire hotspot, with Turkey hit by its most intense blazes on record and a heatwave producing a high risk of further fires and smoke pollution around the region, a European Union atmosphere monitor said on Wednesday.

Wildfires are raging in countries including Greece and Turkey, where thousands of people have been evacuated from their homes and on Tuesday a fire threatened to reach a coal-fired power plant. [L1N2PB0FC]

The fires have struck as Southern Europe experiences an intense heatwave, with some places in Greece on Tuesday recording temperatures of over 46 Celsius (115 Fahrenheit).

Human-induced climate change is making heatwaves more likely and more severe, scientists say. The EU's Copernicus Atmosphere Monitoring Service (CAMS) said the hot and dry conditions had hiked the danger of further fires, although high temperatures alone do not trigger wildfires because they need a source of ignition.

CAMS monitors wildfires through satellites and ground-based observation statements, and said the emissions and intensity of wildfires are rapidly increasing in Turkey and Southern Italy.

In Turkey, a key metric of fire intensity - the "fire radiative power", which measures energy produced from burning trees and other matter - reached the highest daily values since data records began in 2003.

Plumes of smoke from fires in southern Turkey were clearly visible in satellite images of the region, and the severe scale of the fires had caused high levels of particulate matter pollution over the Eastern Mediterranean area, CAMS said.

"It is especially important to closely watch these high intensity fires as the smoke they emit can have impacts on air quality locally and downwind," said Copernicus senior scientist Mark Parrington.

The European Commission said on Wednesday it had helped mobilise firefighting aircraft, helicopters and firefighters to assist Italy, Greece, Albania and North Macedonia. 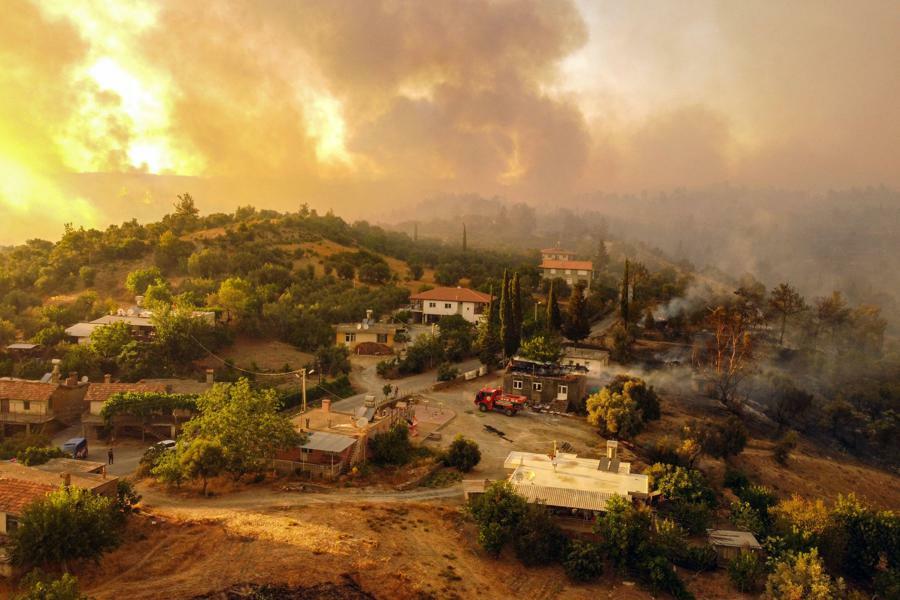 Wildfire Intensity Reaches New Records In Turkey
The intensity of wildfires in Turkey has reached new records, causing massive levels of air pollution, according to the latest…

Forbes
One subscription that gives you access to news from hundreds of sites
Greece fires: Thousands evacuated from Athens suburb as wildfires rage amid worst heatwave in 30 years

More than 40 fires are burning across Greece, write Marina Rigou in Athens and Nikolia Apostolou in Kalamata

Coastguard vessels helped with evacuations on Wednesday on the Greek island of Evia, where residents escaping wildfires fled to a…