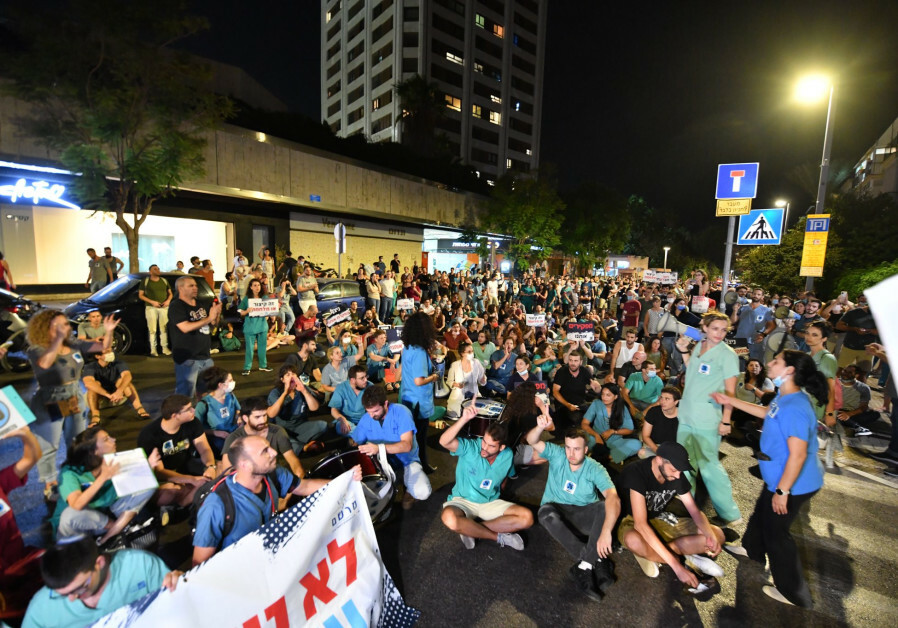 Medical doctors, residents, interns and students marched in Tel Aviv on Saturday night to protest the government’s decision to continue 26-hour shifts for most doctors.

The residents claim that if the current suggestions are implemented, only 10 percent of doctors will see their shifts cut down, as the outline only include hospitals in the periphery and only in certain professions.

Medical personnel march in Tel Aviv in protest of 26-hour shifts, on October 9, 2021.

The 26-hour shifts are harmful to doctors and patients alike, claim the protesters, who demand a setup of 18-hour shifts be implemented across the country.

"Twenty-six, Nitzan, be ashamed," chanted the crowds as they blocked the entryway to the house of Health Minister Nitzan Horowitz, who refused to come out to speak to the demonstrators.

The outline, approved by the Health, Finance and Economy ministries in the past few days, was rejected by the representatives of the medical residents.

The plan entails, over the course of five years, a decrease of shifts from 26 hours to 16 hours plus two overlapping hours.

The first phase of the plan is scheduled to start on March 31, 2022, in hospitals in the periphery at 10 medical centers and apply to residents in non-surgical wards. A year later, the shifts will also be shortened for residents in intensive-care units and in anesthesiology.

Over the course of four years, the new rules would be extended to residents in all fields in all of the country’s hospitals.

"There are a number of professions, in periphery hospitals only, that received funding for shortened shifts. Only for 2022," claims the organization. "The rest is nothing, statements that may sound good but have no commitment or funded project behind them. We would have to fight every year for more funds and positions."

Over 2,500 doctors and students have signed a petition to resign on Sunday if their demands are not met. According to Mirsham, the Health Minister refused to accept the communal letter of resignation, and the organization left the letter glued to the door at the Health Ministry.  "Israel 2021 - this is the way doctors are treated," said Dr. Biton in a Facebook post.

Rossella Tercatin contributed to this report.