KYIV, Ukraine — McDonald's has reopened in Ukraine, after seven months of war.

The American fast food chain temporarily closed its more than 100 Ukrainian locations on Feb. 24, the day Russia invaded, citing the safety of employees.

Three locations reopened on Tuesday, welcoming war-weary Ukrainians back beneath the warm glow of the golden arches. Regular citizens and high government officials alike flocked to snap selfies with their Big Macs and devour meals they haven't been able to enjoy in months.

"It's a nice gift from McDonald's," says Yaroslav Holovatenko, as he clutches a Big and Tasty — a quarter-pounder — in a cold and rainy park in Pozniaky, an outer neighborhood of the capital Kyiv near all three of the reopened McDonald's.

Holovatenko and his friends have come from the other side of the city, across the Dnipro River. But this pilgrimage to McDonald's is more than a crosstown trek. It's about nostalgia too — and hope for the future.

"When the war began, nobody was thinking about McDonald's, but now that things have begun to return to normal, it's nice to have some comfort food," he says.

Since the Russians retreated from the suburbs of Kyiv in April, as many as 3 million people have returned to the city, according to Mayor Vitaliy Klitschko.

"In recent months, we've become convinced that our reopening will return a small, albeit important, sense of normalcy to Ukraine," Paul Pomroy, McDonald's senior vice president, posted on the company's Ukrainian Instagram page in August. "Ukraine's leaders have said that returning to work is the best way for foreign companies to support the local economy and the Ukrainian nation."

And Holovatenko is not taking this meal for granted.

He is originally from Donetsk, which is set to hold a referendum — along with three other Russian-occupied regions — this weekend on whether to become part of the Russian Federation. If Russia annexes these regions, it means Donetsk won't have any McDonald's either. The chain has closed all of its locations in Russia, where local franchisees replaced McDonald's with a not-so-subtle knock-off.

With the newly reopened McDonald's locations in Ukraine, there is a catch: customers can only order through delivery apps; there is no indoor dining. It's competitive too, with a cottage industry for McDonald's orders cropping up on Ukraine's version of Craigslist.

Outside one branch, dozens of people are camped out in the rain waiting up to three hours for their food ordered ahead of time via delivery app — while others desperately refresh their phones, grasping at a chance to place an order at all.

Meanwhile, delivery drivers buzz in and out of the restaurant, cradling the coveted orders in their arms like precious newborns.

Ukraine's main ride share company says rides to malls with open McDonald's went up by between 20% and 30% since the restaurants reopened.

"It's a rush. I pick up the order, deliver to the sidewalk, and repeat," says Maksym Khadav, one of the delivery drivers. "I get the appeal, but it's just food."

That said, he's proud to have been the first driver in line for a pickup at the Aladdin Mall location. He guesses around 300 couriers were in line behind him.

Every Ukrainian of a certain age remembers when the first McDonald's opened in the Soviet Union in 1990. Even though a meal cost half a day's salary, hundreds lined up in Moscow for the American burgers.

"I thought they wanted to launch nuclear rockets at us, but they gave us McDonald's and peace instead," said a boy in a news report at the time.

Holovatenko says McDonald's reopening in Kyiv feels like a younger generation's version of what happened in 1990. With the long lines comes the hope of a free and democratic future. 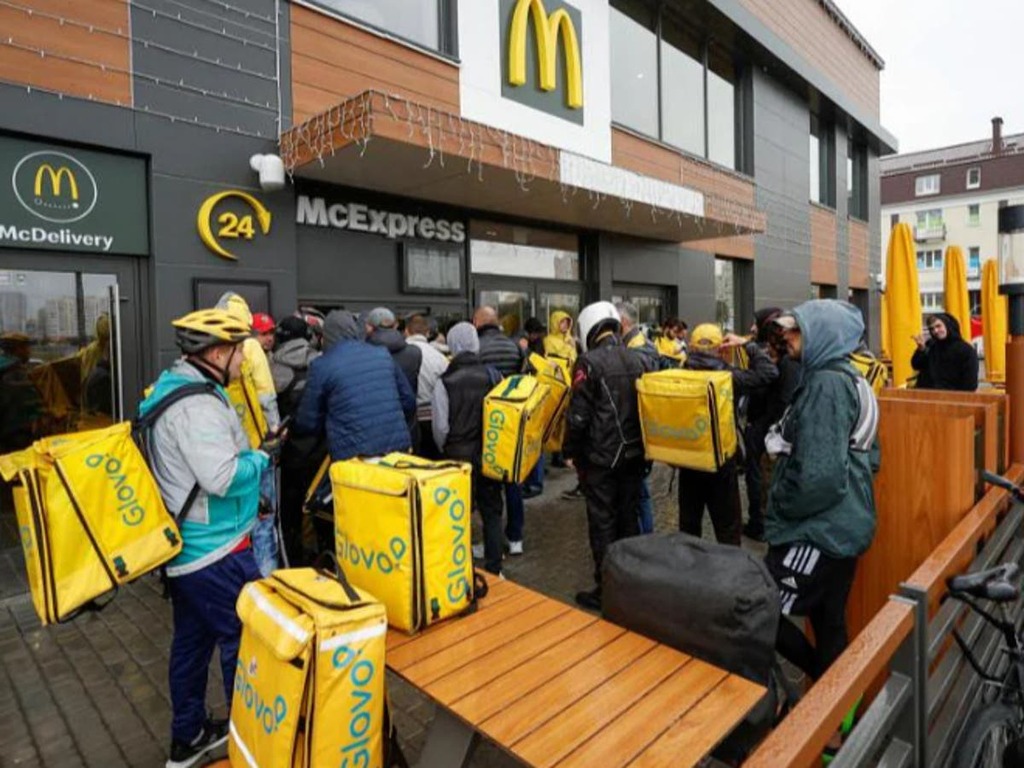 The Independent UK
One subscription that gives you access to news from hundreds of sites
Offering taste of normality, McDonald's reopens in Kyiv seven months into war

McDonald's in Kyiv reopened for the first time since Russia's invasion on Feb 24, 2022, a sign that life was…

Voting began on Friday in four Ukrainian regions mostly held by Russian forces, the start of a plan by President…