McDonald's items from the 1980s and 90s that have disappeared

McDonald's is the most successful restaurant in the entire world and part of the reason is it has adapted to the times.

But there are certain things that have been lost over the years to make way for the new generation of vegan burgers and modern decor. It first opened in the UK in Woolwich, London, in 1974, and the original decor has had a few changes over the years, the MEN reports.

Ronald McDonald is now all but gone along with the Hamburglar, McDonald's Pizza and McDonald's Hot Dogs. However, for years, people from all over the UK and the US on Reddit's Nostalgia forum have shared an abundance of old McDonald's images from the '80s and '90s, meaning there's now a good collection of them to browse through.

READ MORE: The food hygiene ratings for every McDonald’s in the North East

Here is a list of nostalgic items that you will be pining for.

Yes, McDonald's did sell pizzas for a limited period in some restaurants in the mid-1990s as part of a sales and product test. As part of the test, the restaurant trialled three flavours - Cheese, Cheese & Pepperoni and the Deluxe (cheese, green pepper, onion, pepperoni and more).

Each pizza was eight inches across and cut into four slices. But if you're salivating at the thought of getting your hands on a McDonald's pizza, you're in for a disappointment. On their website, McDonald's has said they have no plans to reintroduce pizza to their menu at this time.

The McHotDog was put on the menu in the late 1990s in the UK and was brought back as a seasonal item in the summer of 2002. It was a typical American hot dog with ketchup and mustard - but apparently McDonald’s didn’t think it was worth keeping on the menu.

Now seeing this packaging is a blast from the past. These clamshell beauties were good for sauce lovers but were also an environmentalist's worst nightmare. However, breaking them up after the meal was also immensely satisfying.

In 1990, McDonald’s agreed to stop using foam for their burger packaging. However, they continued to use it in other items, like cups, for years to come. It wasn’t until 2018 that they made the promise to eliminate it from their global markets.

Some lucky places were not only provided with a McDonald's restaurant but also came with a playground outside. Some people even claim to remember there being a McDonald's ball pit.

The reason you don't see them these days is apparently that McDonald's franchises favour more seating and lower land costs. However, McDonald's has built playgrounds on the grounds of various Ronald McDonald Houses in the UK, made from recycled materials, for families to enjoy while taking care of their seriously ill children.

Ronald McDonald is the chain's clown mascot who inhabits the fictional world of McDonaldland. Once a staple on British TV adverts in the '80s and '90s, these days you rarely see the clown with his friends Mayor McCheese, the Hamburglar, Grimace, Birdie the Early Bird and The Fry Kids.

Today, you're more likely to see an appearance by Ronald McDonald at a special event or entertaining children at Ronald McDonald House. However, in 2011, a group of 500 doctors and other health professionals took out newspaper ads saying a fast-food clown mascot that targets children was unethical and should be retired.

Some branches in the UK were said to have benches outside where you could sit next to the not at all creepy statue of Ronald McDonald with his arm around you. Personally, in this Instagram age, we think it's something that needs to be brought back.

When McDonald's restaurants were red, yellow and white

There was a time in the 1980s and 1990s when the dominant colours adorning the outside of the restaurant were red, yellow, and white. These days, however, in Europe it's more usual to see the more muted green and yellow branding outside the restaurants, supposedly to reflect the company's commitment to the environment.

One thing that hasn't changed though is the golden arches which are the instantly recognisable symbol of the brand.

Having a birthday party in the children's area

Not really something you see these days, but back in the 1980s and 1990s, the decor in parts of McDonald's restaurants seemed to be geared more toward children. But if you were the kid who was inviting your friends to your birthday at a McDonald's, then you'd be sure to be the talk of the school.

Although many of the items on this classic McDonald's menu are still staple elements of the menu today, there's no getting away from those prices. I mean, 89p for a Big Mac, and another 12p off if you eat it outside.

It's also worth noting that McDonald's breakfast items were not introduced to the UK until 1982 and you could order your eggs scrambled.

Although Happy Meals had been introduced to the US restaurants in 1979, it took them until 1986 to appear in the UK. Aimed at children, now many of the Happy Meal packaging and toys from the '80s and '90s have become many sought-after collector items.

Many McDonald's Happy Meals are in collaboration with big-name movies or toys offering themed merchandise such as Star Wars, Lego, and Toy Story.

Unlike the modern polo shirt and baseball caps sported by today's McDonald's employees, uniforms back in the 1980s featured striped shirts and small sharply cornered hats, reminiscent of what you see in a classic American diner.

Until the indoor smoking ban for pubs, shops and restaurants came into force in the UK in 2006, you would likely see one of these ashtrays at every table in your local McDonald's. Some were made of aluminium while others were made of glass. 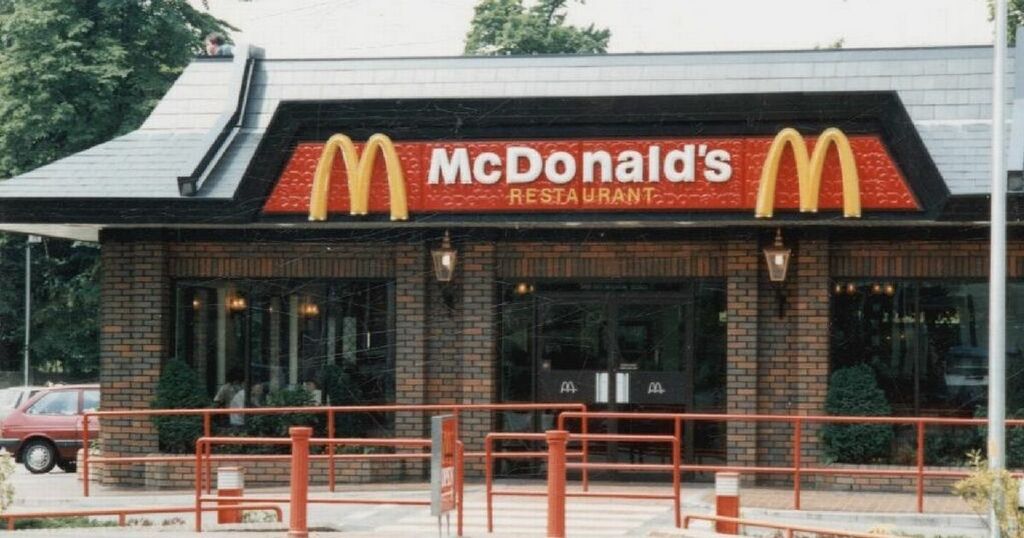 The first UK branch of the fast food chain opened in Woolwich, London in 1974

Love it or hate it, McDonald's is a part of our lives and has been since it first came to…