“If you can’t go to America, come to McDonald’s in Moscow," ran a McDonald’s advertisement aimed at the long shut-off Russian market. Soon, other global brands piled in and dotted streetscapes with their logos and storefronts. The country of Potemkin imported many such familiar façades that were effective in conferring a kind of legitimacy on its government. Whether it was McDonald’s or Hugo Boss, such frontages suggested a country open to global investors and hip to modernity.

That was then. On 16 May, McDonald’s Corp took the decision to pull the plug and “de-arch" Russia.

That’s markedly different than simply shuttering an outlet as McDonald’s and other brands did two weeks after Vladimir Putin launched his invasion of Ukraine. Employees continued to be paid and stores stood with logos aloft, still on the books of the parent company. Such actions could easily be reversed in a way that a wholesale market exit cannot be. Many other international brands did the same as a sign of disapproval but not yet despair.

Now companies are packing up and actually leaving. On Monday, French carmaker Renault SA announced it would sell all its Russian assets to a government-controlled entity. More will no doubt follow. It’s like seeing Narnia’s thaw thrown into reverse.

McDonald’s chief executive officer Chris Kempczinski recalled that the company’s entry to the Russian market 32 years ago had been a triumph of hope. “Hope for a country that was opening itself to the world after decades of isolation. Hope that the world was becoming a little more connected"—symbolized by being able to get the same Big Mac in Moscow that you got in Chicago.

Hope, however, needs some kind of handle. Kempczinski says he considered the legal constraints on operations, whether the brand could meet customer needs and operate the Russian business freely, whether its presence there would enhance the brand, whether it made business sense and whether it aligned with McDonald’s values. Only the last one gave pause: what about its 62,000 employees, its franchisees and all its local relationships? In the end, the humanitarian crisis in Ukraine caused by Putin’s war provided the hamburger chain an answer.

For a company that built a global empire on a strategy of replication, what it now describes as “de-arching"—meaning the brand’s logo, name and menu can no longer be used—is both dramatic and unprecedented. Execution will likely be messy and McDonald’s doesn’t have a timeline. It says it’s looking to sell its nearly 850 restaurants in Russia to a local buyer. Most of these outlets are company-owned, but over 100 are controlled by franchisees and some of those have refused to shut down or take down the golden arches.

McDonald’s aims to keep paying its employees in Russia until a buyer is found. But those workers, franchisees and a large network of suppliers and sundry service-providers all face an uncertain future, best described as collateral damage of Putin’s war. Gone too will be Ronald McDonald House charities and the local Hamburger University, which taught business skills and provided career opportunities.

Government-backed entities are likely to try to convince Russians nothing much has changed, or that a domestic version of McDonald’s will be even better. In March, a new Russian restaurant me-too chain revealed its logo—a Cyrillic ‘B’ (pronounced as a V in Russian) that looks like the golden arches seen sideways.

New York Times columnist Tom Friedman’s observation that no two countries with McDonald’s would fight a war against each other seemed to hold true for years. We’re back to reminding ourselves of a rather more mundane rule: that countries without the rule of law, whose leaders-for-life are not democratically accountable, are capable of crazy things.

For a $181 billion company, a non-cash charge of about $1.2 billion to $1.4 billion for its investment in Russia isn’t a major hit; shares barely moved in response. But McDonald’s exit is further confirmation that a new iron curtain descended on 24 February. It’s confirmation that Russia is no longer investible, even for a burger brand with 100 countries on its map. And for Russians, it’s another sign that winter has returned. Who knows how long it will last this time. 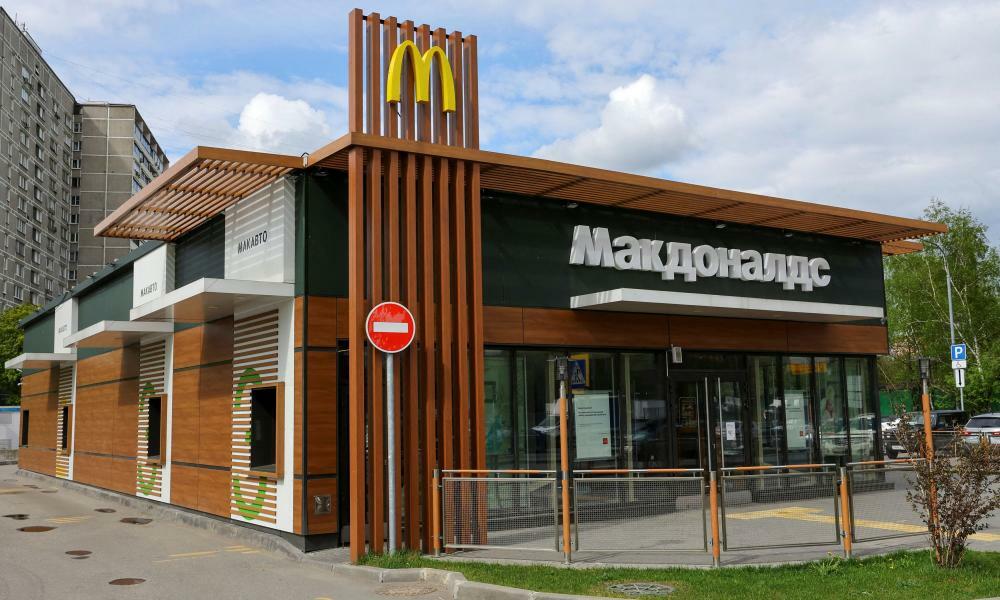 Irish Independent
Ex-Coal Miner Buying McDonald’s in Russia Is Rebranding an Era
Alexander Govor, the McDonald’s Corp. franchisee who’s now bought the chain’s entire business in Russia, will have to create a…