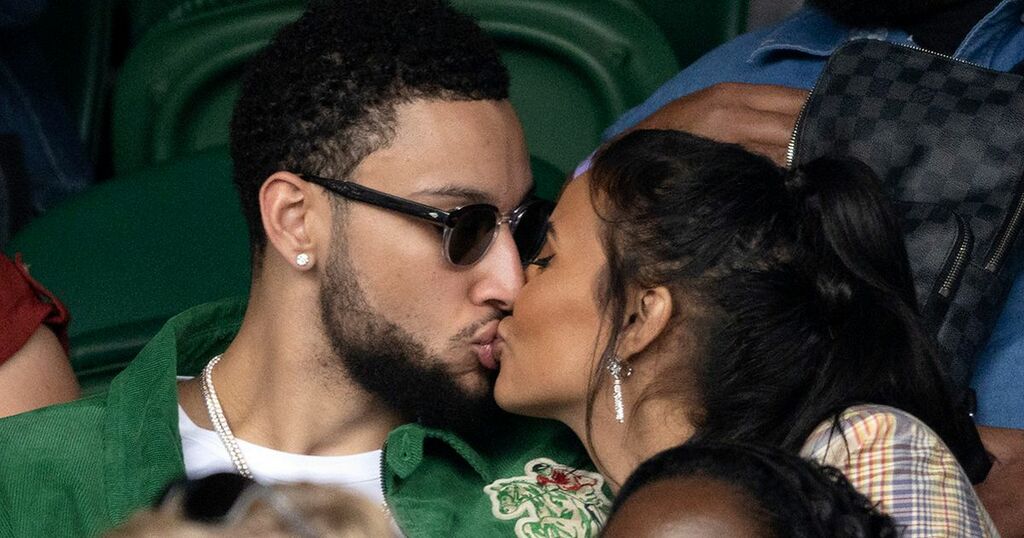 Maya Jama has been spotted with a huge rock on her ring finger.

The sighting of the beauty with the dazzling accessory comes after reports emerged that the TV star, 27, became engaged to basketballer Ben Simmons, 25, over the festive period.

Glow Up: Britain's Next Make-Up Star host Maya looked happy as she was snapped enjoying a low-key stroll with her husband-to-be in Philadelphia on Monday.

Maya styled up an oversized hooded sweater paired with leggings for the relaxed outing and covered her nose and mouth with a face covering.

As she waved her left hand around, her new rock was hard to miss - due to the size of the stunning emerald cut diamond.

Ben walked alongside his sweetheart and appeared to be hanging on her every word as they chatted during their walk.

The athlete, who has been dating Maya for seven months, carried a drink in one hand and a pair of trainers in the other.

He was seen donning leisurewear, in the snaps obtained by MailOnline, and quirky Croc shoes with socks.

The Mirror has approached a representative for Maya for comment.

In December, The Sun reported that the Philadelphia 76ers player popped the question to the former Radio 1 DJ over Christmas.

An insider told the outlet: "Ben adores Maya and has fallen head over heels for her. He picked up the ring on Jewelers’ Row in the diamond district of Philadelphia the day before he proposed.

"He chose the ring himself and felt he knew exactly what she would want. Maya said yes and they’re both thrilled."

Maya and Ben are yet to publicly comment on the news.

The Bristol native reportedly spent Christmas at Ben's £3.7million mansion in Moorestown, New Jersey and is planning to move across the pond for good to be by her beau's side.

Maya went public with the NBA player at Wimbledon 2021 after splitting from British rapper Stormzy in 2019.

Shortly after she turned 25 she left the hitmaker - leaving fans shocked.

Stormzy later appeared to share on why he and Maya went their separate ways with his song Lessons.

In the song, he confessed that he had “done the dirt” on the TV star - prompting many to believe he had been unfaithful.

However, the award-winning musician later revealed he hadn’t cheated throughout his relationship but instead, admitted to showing "disrespect" to his famous ex.

"But I thought now was a good time to say that I didn't cheat on my ex."