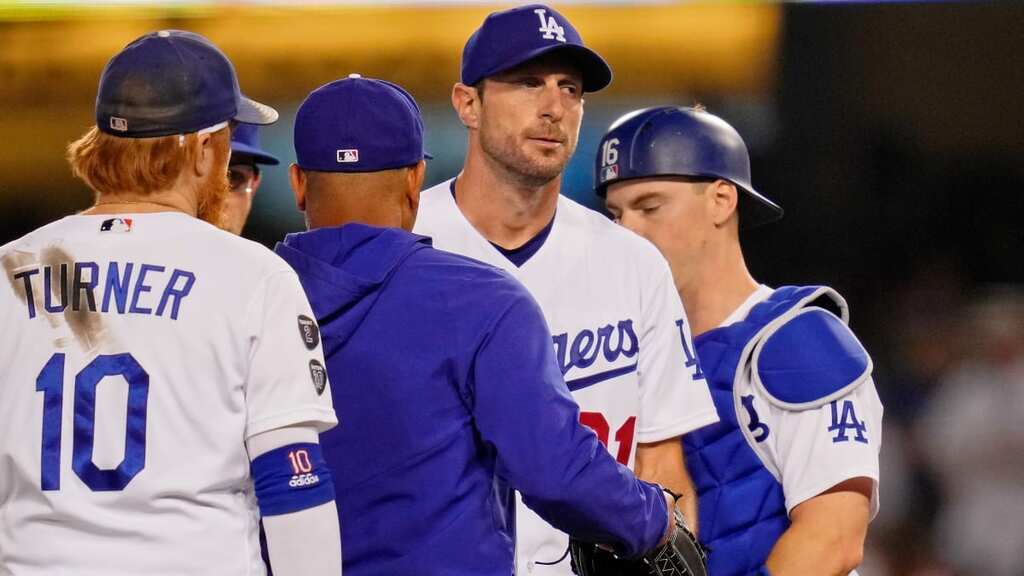 They call him Mad Max for a reason

Max Scherzer is the most intense man in baseball. Starting pitchers always have their quirks, but Scherzer is on another level. This is a guy who got in a workout on the field at Nationals Park during Georgetown’s 2021 graduation ceremony, pitched seven scoreless innings the day after breaking his nose and went all-out doing fielding drills the day before his start in the NL wild-card game against the Cardinals. And he somehow kicks it up a notch when he’s actually on the mound, grunting, staring daggers through batters and muttering to himself. You shouldn’t so much as look at him sideways when he’s pitching (and you really shouldn’t touch him).

The only thing on Scherzer’s mind is winning, and he believes no one gives his team a better chance to win than he does. If he’d played 100 years ago, he’d have been the type of guy who threw 200 pitches in a game and went back out the next day to do it again. So when manager Dave Roberts came to pull Scherzer with one out in the fifth inning on Tuesday, he didn’t want to give up the ball.

Of course Scherzer wanted to stay in the game; while healthy, he’d never been pulled from a game after 4⅓ innings or fewer while allowing one run or fewer. (Scherzer has had eight such games in his career, six of which he left due to injury. One was a planned short outing in 2019 in his first game back from the injured list. The other was a 2012 playoff test run on the final day of the regular season after he was scratched from his previous start due to shoulder soreness.)

If he isn’t hurt and or getting knocked around, Scherzer expects to stay in a game. But a single-elimination playoff game is no time to humor a player’s ego. When Roberts came out to get him, Scherzer had just struck out No. 3 hitter Tyler O’Neill but there were two runners on base and only one out, with Nolan Arenado coming to the plate. Scherzer had already thrown 96 pitches and walked three batters. He wasn’t exactly dealing. And so Roberts called on Joe Kelly.

“I just felt that there wasn't a whole lot of swing-and-miss with Max tonight,” Roberts told reporters. “I saw his slider back up a lot. I saw 90-plus pitches not even through five innings, and Arenado took a good swing his first at bat. He's seen him many times over. I felt right there with Arenado coming up there was a chance for a potential ground ball, No. 1, and I just thought it was a different look.

“We're going to lean on Max the rest of the postseason, but I just felt in that moment in time, it was the right decision.”

Roberts wasn’t surprised that Scherzer was reluctant to give up the ball.

“Yeah, I don't ever expect him to be happy, but that was my call,” he said.

But how did Scherzer feel about the early hook? That’s where things get a little interesting. Scherzer didn’t get asked about Roberts’s decision in his postgame press conference. He was asked about it later during an interview on TBS, but he wasn’t exactly in a position to analyze his night too closely.

“You gotta get rid of this echo,” a shirtless Scherzer said as he struggled with audio issues in his headset. “I’m drunk. Whatever.”

“Yeah, Dave Roberts … understands where he wants—sorry, I got an echo—where he wants his relievers in every location,” Scherzer said. “And so, look, he wanted Joe Kelly there. Even though I was good. He wanted Joe. So that’s how you win a ball game.”

See? Once he’s out of the game, Scherzer is actually able to let loose.

The best of SI

What should Shad Khan do about Urban Meyer? ... The Suns are at risk of burning a bridge with Deandre Ayton as they play hardball in contract negotiations. ... Clemson’s offense is a shell of its former self, and there might not be an easy fix. ... Stephon Gilmore played the system perfectly to get paid and then get traded.

Kevin Durant is hopeful that Kyrie Irving will get the COVID-19 vaccine and be able to play in home games. ... Matt Vasgersian is leaving ESPN’s Sunday Night Baseball booth. ... MLS expansion team Charlotte FC will award a roster spot to the winner of a reality show.

Every wild-card game should end on a walk-off

Those are good teammates

How do you not soil yourself if this happens to you on the mound?

Sounds like Kyle Shanahan should have taken him over Trey Lance

Candace Parker is one of the greats

Of course Bryson DeChambeau is an Android guy

That’s how you play the game

A group of independent “investigators” claim to have uncovered the identity of the Zodiac Killer. ... A man selling a car part on Facebook was arrested after cops noticed a bag of meth in the background of the photo he posted. ... A man from California is suing a psychic, claiming she failed to reverse the curse placed on him by an ex-girlfriend. ... Actor Giancarlo Esposito had a blistering response to people in Hollywood who refuse to get vaccinated.

Email dan.gartland@si.com with any feedback or follow me on Twitter for approximately one half-decent baseball joke per week. Bookmark this page to see previous editions of Hot Clicks and find the newest edition every day. By popular request I’ve made a Spotify playlist of the music featured here. Visit our Extra Mustard page throughout each day for more offbeat sports stories.