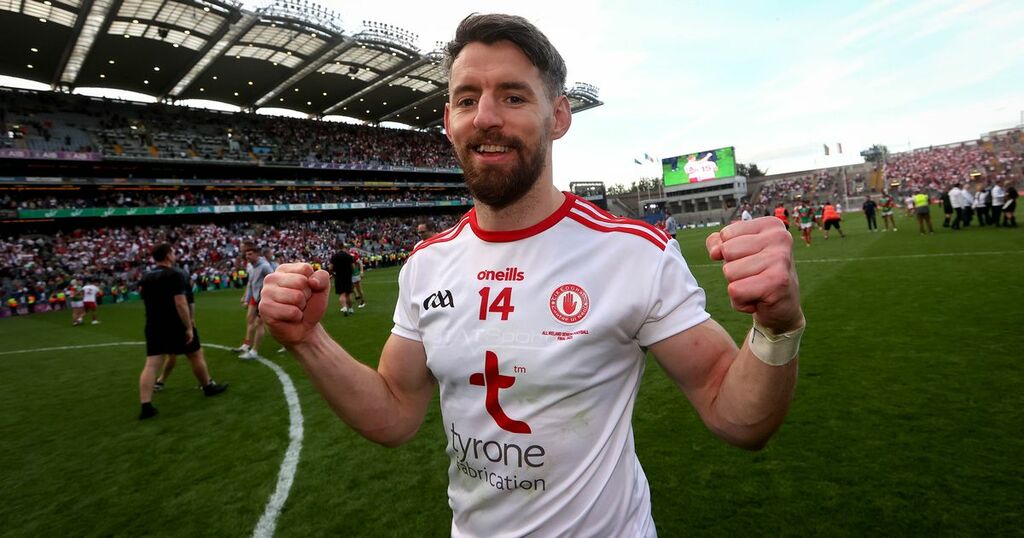 You sense it may not have been how Mattie Donnelly dreamt it — or believed it would happen.

But equally, if that was the case, he didn’t seem to give a hoot either.

Getting over the line in an All-Ireland final was all that mattered, with the clock ticking at 30 years of age, and after committing two decades of his life to Tyrone GAA.

Eyebrows were raised in plenty of quarters at the two-time All Star’s substitution after just 44 minutes of Saturday night’s Sam Maguire decider triumph, but it was the result that mattered to Donnelly.

In all of those games they just weren’t quite good enough and couldn’t have too many qualms about the results.

It still hurt though, but last Saturday night made it all worthwhile.

All the sacrifices and the hours in the gym, wondering would they ever get there in the Dublin era.

Donnelly, who has played 57 Championship games for Tyrone, scoring 1-68, said: “This isn’t a thing since last October.

“It’s since we all laced our boots up. That’s what I said to the boys. It’s all come together and it’s culminated in this.

“Even when I started out in the senior squad, you are looking in front of you, looking behind you, to see what’s coming.

“You just knew when them boys were coming, everyone that was meant to be there was in that changing room.

Donnelly says he always believed he would win a Celtic Cross to put beside his All-Ireland minor medal from 2008.

“You see them (players) after the game, boys you have been through so much with,” said the Trillick man. “Never lose faith.

“When you were after hard losses, down in the dumps and things look bleak, you remember the conversations and the things that stick out, and the moments that boys dug in and stuck together.

“That’s why this is just unbelievable.”

Donnelly didn’t mince his words when asked if it was redemption for the 2018 All-Ireland final defeat by Dublin when he was Tyrone skipper.

“You don’t often get big chances at the big one and this was a second chance for a lot of us.

“First chance for some but you just never know when they come around. We were determined to grasp it and we did.

“The scary thing is, that team probably isn’t operating at optimum levels yet.

“We haven’t reached our ceiling yet, so we have to look at that, and that makes the future exciting as well.”

Donnelly continued: “I think the moments on the pitch afterwards just caught you by surprise.

“When you see your brother, your club mates, the boys that you have been in the doldrums with for 10, 12 years now.

“Even Petey Harte. (I have) been on the go with that man since he was 15/16 and just to share the day and validate all the work we have done.

“It was just emotional and it just makes it all worthwhile.”

Donnelly praised the input of their current Brian Dooher and Feargal Logan-led management team and the previous one fronted by Mickey Harte and Gavin Devlin.

He continued: “We can’t lose sight of the fact too that they (Dooher and Logan) really carried on the basis that was laid there by the previous management.

“Those two (Logan and Dooher), just the energy and the passion that they have for Tyrone, just gave us that real jolt through this year.

Donnelly continued: “Feargal has been there in ‘95 (losing the All-Ireland final to Dublin), and a lot of that team was there in 2018.

“If we weren’t going to do it (now), when were we going to do it? We have all won All-Irelands at minor, Under-21, but you are remembered for the senior ones really.

“The team in general, when were we going to do it? We were determined to do it.”

Donnelly believes that the remaining years of his career will be played in a more relaxed state now that he is a senior All-Ireland winner.

That’s something he’s looking forward to immensely, and he reckons it will tell in Tyrone’s performances.

“When you are coming from a place with a tradition of winning, you are always seeking that validation to dine at that top table almost.

“Whether it’s right or wrong, you are always going to be compared to that bench mark. We have our medal, and we have a lot to improve on. A lot more room to improve.

“Perhaps the medal will help us dip into that and tap into that. This team is a very exciting squad to be part of.

“I think the next few years there is a lot there for us if we really apply ourselves well.”

Cavanagh retired less than a year ago, and there was speculation at one point that he might return to the Tyrone fold under the new management.

The big Moy midfield man has an All-Ireland medal as a playing substitute from 2008, alongside older brother Sean but missed out here.

Donnelly said: “I was delighted to see him (Colm Cavanagh). Obviously you wish you could share that moment, because he deserves it as much as any of us.

“Even I think of the likes of Harry Loughran, Mickey O’Neill — they have been part of this.

“They have been in the doldrums with us, but everyone who has put the shoulder to the wheel knows how much it means and they deserve as much as we do like.

“The blend there just made the squad. Everyone respected each other from top to bottom.

“The core group, the likes of (Padraig) Hampsey, (Kieran) McGeary and them boys are just unbelievable players and characters and we pass on our experience.

“It is vital within a team setting to have that, but we are only as important as the next man beside us.

“The perfect storm there from young to old really.”

Last year when Dublin won the All-Ireland they conceded no goals in five games, with Stephen Cluxton only having one save to make.

This year Niall Morgan’s net only rippled once, with Donegal midfield man Caolan McGonigle scoring a goal in the Ulster semi-final.

It was a far cry from Kerry ripping Tyrone to shreds in Killarney in the League semi-final back in June, plundering six goals along the way.

This led to many pundits and fans drawing the conclusion that in a Covid-hit season, first-year managers Dooher and Logan still had too much work to do for Tyrone to be serious All-Ireland contenders.

“We did have to review our defensive set-up, our collective work rate and we have done that in abundance throughout the Championship,” said Donnelly.

“It’s been the foundation for our season.

“Probably weren’t as functional in the top third in a lot of games this year so when we start addressing that and keep the back door the way it is, that’s an exciting prospect.”

The thoughts of Cathal McShane and Darragh Canavan starting next year will have Tyrone fans excited, while the likes of Rory Brennan and Richard Donnelly could play bigger roles too.

It leaves Tyrone in a healthy place when they come together next year to go after the county’s first back-to-back All-Ireland titles.