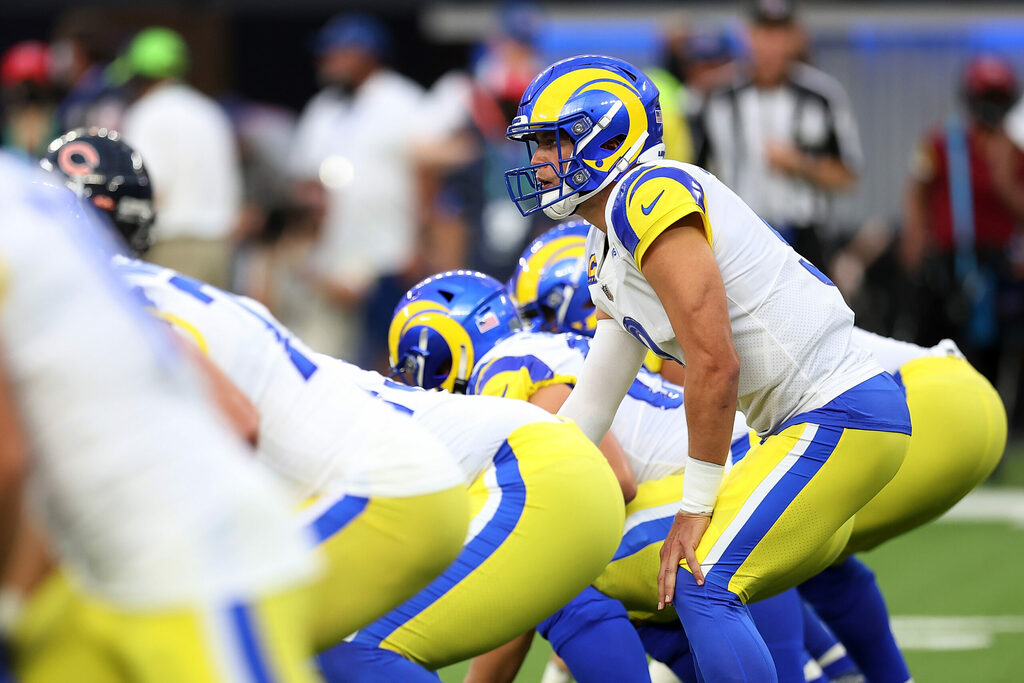 When the Detroit Lions traded Matthew Stafford to the Los Angeles Rams, his former teammates raved about his leadership and toughness, as well as his sheer talent on the field. There wasn’t a single player who had a slightly negative thing to say about the veteran quarterback.

So it shouldn’t be the least bit surprising that after a phenomenal 321-yard, three-touchdown performance in Week 1, Stafford was quick to deflect praise to his teammates. In his first answer during his press conference, Stafford called it a “complete team win” and credited Sean McVay for some brilliant play calls to get guys open.

“It was awesome. You know, it was a complete team win,” he said. “Obviously, our defense did a great job getting the ball back for us three or four times it felt like. Great job on fourth down a couple times turning the ball over. As an offense, it was tough kind of to get into a rhythm the first half. We only had four possessions, but we were explosive on some of those and made some big plays. You know, Sean dialed it up great and our guys went out and executed. A lot to learn. Some good to take away from it and keep building on it. Obviously, some plays we’d love to have back like every single game.”

On just his third play as a member of the Rams, Stafford connected with Van Jefferson for a 67-yard touchdown, chucking it deep down the right side to the second-year receiver who slipped behind the defense. It was an eye-popping throw that traveled about 55 yards in the air, but Stafford didn’t even want to take credit for that play.

He mentioned his offensive line giving him “all day” and Jefferson getting behind the last line of defense.

On the first drive of the third quarter, Stafford found a wide-open Cooper Kupp deep down the middle, hitting him in stride for a 56-yard touchdown. Predictably, he complimented his offensive line, his receiver and McVay for the jobs they did, taking no credit for the play.

“And then the second one to Cooper, that was a great call by Sean,” Stafford continued. “Perfect coverage for the play. Our guys up front again gave me a bunch of time. It takes time for guys to get down the field. Cooper did a great job, again, just getting behind the defense and I was able to get it out there to a decent spot for him.”

Although Stafford had Calvin Johnson and Marvin Jones Jr. and Kenny Golladay in Detroit, he never quite had a receiving corps this deep from top to bottom. He distributed the ball nicely on Sunday night, hitting six different players for completions on only 26 attempts.

He threw one touchdown each to Kupp, Robert Woods and Jefferson, and also found Darrell Henderson Jr. for a 17-yard gain on a checkdown.

That’s how Stafford wants to operate each week, saying the Rams offense will be at its best when he’s spreading the ball around.

“Yeah, that’s when we’re going to be at our best, when everyone gets involved in the game,” he said. “I’m not sure how many different guys had catches, but it felt like a bunch. You know, those guys are talented playmakers. I’ll do it a different way. So I’m trying to do everything I can to make sure those guys are able to show their abilities and go out there and play.”

Stafford admitted there was “a lot of anticipation for this game,” being on a new team in a new city with a completely different supporting cast. And although it’s only one game, he likes the direction this team is headed.

It’s a locker room that doesn’t lack chemistry and Stafford appreciates the way everyone embraced him in this new chapter of his career.

“This team has embraced me and I really appreciate that. I’ve done everything I can to try to just work as hard as I can and get myself in this team. And they wrapped their arms around me and it felt good to go out there and play with them tonight,” he said. “Such incredible players on this team. I’m lucky to be a part of it. I want to do everything I can to try and lead this team. It’s where we want to go. Obviously, this is just one. Gotta keep building on this.”