'Matrix 4' trailer might be hiding a mind-blowing Morpheus twist 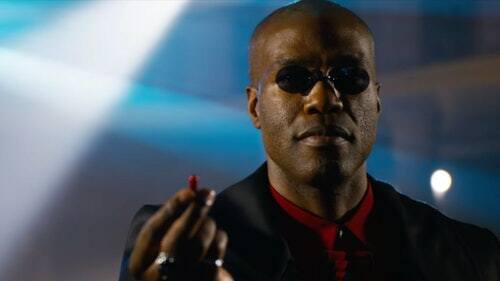 Who is the new Morpheus? This is one of the most important questions posed by the first Matrix Resurrections trailer, which features Yahya Abdul-Mateen II playing a character who looks an awful lot like Lawrence Fishburne’s irreplaceable rebel leader.

Just like in the original Matrix, this version of Morpheus trains Neo in a virtual dojo, offers him a mind-expanding Red Pill, and speaks about far-out ideas like fate and destiny. But in Matrix lore, Morpheus is dead. So how is he back and why does he look different? The answer lies in a forgotten chapter of The Matrix Online — and no, it’s not the one you’re thinking of.

Morpheus after The Matrix Revolutions

The last time we saw Morpheus on the big screen was in the final minutes of The Matrix Revolutions. From his home in Zion, he learns that Neo managed to broker a truce between humans and machines. However, as we learned in The Matrix Online (a multiplayer game released after the original trilogy), peace wasn’t as lasting as Morpheus originally believed.

After Revolutions, Morpheus demands that the machines hand over Neo’s remains. When they decline, he becomes angry and attempts to destabilize the fragile truce created by Neo, murdering innocent blue-pilled humans inside the Matrix in the process. Of course, actions have consequences, and Morpheus was famously assassinated by an assassin called, wait for it, “The Assassin.” (Rumor has it the Merovingian called in the hit.)

Anyway, after Morpheus’ funeral (which became a major event in The Matrix Online) strange transmissions started to broadcast inside the Matrix. It turned out that Morpheus wasn’t gone, he was just being blocked from re-entering the Matrix, but through these broadcasts, he relayed a wild claim: Neo was still alive and being held hostage in Machine City. This bombshell pushed the many factions of the post-Revolutions world into an all-out conflict.

Morpheus and the General

Here’s where the plot thickens. This resurrected Morpheus was not the one that fans knew and loved. Instead, he was a “Simulacrum” created by the General, a Sentinel who led the machine forces in the Battle of Zion at the climax of The Matrix Revolutions.

After the original trilogy, the General and his loyal Sentinels rejected the truce. Instead, they set up shop at a fortress called Stalingrad and jacked into the Matrix using a pirate frequency. From within the simulation, the General and his allies tried to reignite the battle between man and machine, which is where fake Morpheus comes in.

Anyway, the Morpheus Simulacrum eventually becomes self-aware and confronts the General, defeating him in a fight. The General leaves fake Morpheus to grapple with his own existence as a copy of the original, but it gets even weirder than that.

Was there ever a real Morpheus in the first place? The answer may lie in one of the Matrix trilogy’s most infamous scenes: the discussion between Neo and the Architect in The Matrix Reloaded.

Morpheus and The Matrix 4

In this illuminating scene, the Architect told Neo that he was merely a control mechanism to prevent the Matrix to collapse in his perfection. In this conversation, The Architect suggests that even Zion could be a part of the system. Basically, if you think of the Matrix as the desktop of your computer’s operating system, then Zion is like the Recycling Bin where deleted files wind up.

To take this metaphor one step further, is it possible that Morpheus is basically just a DMG file designed to trigger Neo in each iteration of the Matrix. In that case, it’s possible every version of Morpheus has been nothing but software with a very specific purpose.

And if that’s the case, it could explain why Morpheus is still up to his old tricks in The Matrix Resurrections even if he looks a little different.

The Matrix Resurrections hits theaters and HBO Max on December 22.