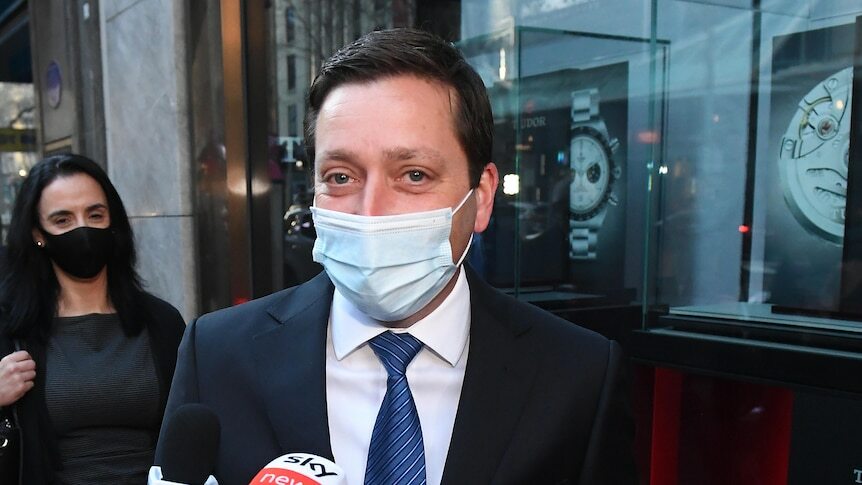 Victorian Opposition Leader Matthew Guy will create a new shadow cabinet position to represent students struggling as a result of remote learning during the pandemic.

Shadow Minister for Child Services and former assistant school principal Matt Bach will take on the new role and work closely with the Shadow Education Minister.

Mr Guy, who has been supervising his three boys' home learning, told ABC Radio Melbourne the new role would be very important as the state moved out of lockdowns.

"Like a lot of parents my age, I think we're looking at our kids and wondering how they are going to come out of this in terms of their own mental health," he said.

"I want to have someone who is totally dedicated to the focus on students, their needs, and their mental health."

Mr Guy was reinstated as leader of the Liberal Party this week, toppling Michael O'Brien less than three years after Mr Guy lead the opposition to an embarrassing defeat at the 2018 election.

When asked what Michael O'Brien did wrong, Mr Guy said the party needed to be "sensible" and "positive" in talking about the future.

"I never factored my thinking into what someone has done wrong, I factored in what I thought I could do and I feel I am the best person to heal, unite the party and move us forward," he said.

"I am, compared to everyone in the room, in my view, the best person to be uniting the party putting us on an election footing … and giving Victorians a choice at the next election."

The full shadow cabinet is expected to be announced this weekend.

Caulfield MP David Southwick was promoted to the Deputy Leader of the Party this week, taking over the job from Eildon MP Cindy McLeish.

Only 23 per cent of MPs in the Victorian Liberal Party are women.

When asked whether he was comfortable with demoting a woman, Mr Guy said he would bring back a program he had in 2018 called 'women to win' to try to boost the number of women in the party.

"I think democracy has to play its part but the Liberal Party has to do a lot better, we know that, I think everyone knows that," he said.

"I want to get more women in the Liberal Party. We've got to look like our state, our state is a diverse and multicultural state and we've got to represent it."

The new front bench position represents the kind of policy pitches Victorians can expect to see pushed by Mr Guy, who has promised to put pressure on the government over a roadmap out of lockdowns.

Mr Guy has repeatedly said his party would adhere to the National Cabinet plan, which meant there would be no citywide or state-wide lockdowns once the 70 per cent double-dose threshold was reached.

He has called for National Cabinet to devise a more detailed roadmap, that would apply to each state equally.

"At the moment, we have states doing their own things which is really unproductive for our country," he said.

'Losing an election humbles you'

The opposition has been criticised throughout the pandemic for being too negative and failing to land a blow on Premier Daniel Andrews.

Mr Guy said he did not want to be negative for the sake of it.

"Even yesterday, I said I'd agree with the Premier that we need to whatever is right in the best interest of the state … we'll agree with the government where we have to and we'll oppose when necessary," he said.

Mr Guy has pledged a positive election campaign, including getting children back to school and putting pressure on the government to provide a roadmap out of lockdown.

While he disagreed with the government's decision-making when it came to closing playgrounds, he said he would work positively with the Premier when appropriate, to help make the state a better place and restore hope to Victorians.

Mr Guy has a reputation for pursuing an aggressive brand of politics and brings with him a legacy of controversial planning decisions and the infamous "lobster with a mobster" dinner.

When asked whether he could change from being a "political brawler" to someone speaking with a language of healing, Mr Guy listed historical examples.

"Losing an election humbles you, it matures you, it gives you a humility that you might not have had."

Mr Guy said he expected Victorians to make their choice next November on different issues than when they went to the ballot box in 2018.