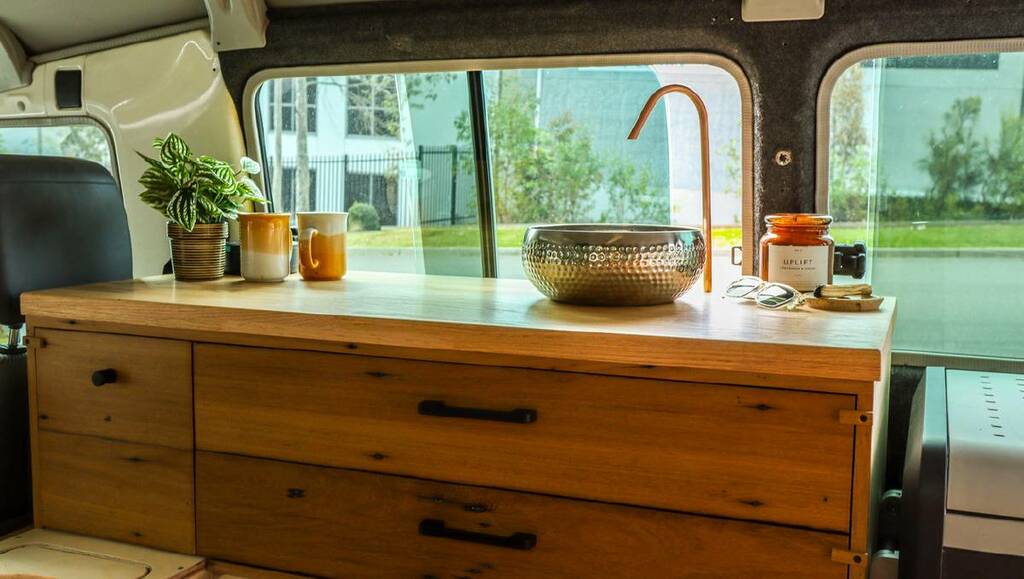 Dan Thomas, of Vans by Dans, believes everyone in Australia wants the van lifestyle, from the age of 18 up to the grey nomads.

This was certainly the case for young Claire O'Brien, of Newcastle.

In early August this year she bought a 2017 Hyundai iLoad van, just before her 20th birthday. She hasn't had a chance to do a lot of travel overseas, and she wanted to go out and adventure by herself.

"I've always been on camping trips with friends. It will be raining, and the ones who tough it out the best are those with the best set-up/equipment," Claire says.

"I really want to get a van, travel up and down the coast, go surfing, go to the beach."

She's one of so many Australians who have, since the pandemic started, embraced the humble van as an alternative to a holiday to Italy or a trek through New Zealand.

While she's not quite prepared to live in her van, she's certainly able to stay in it for a few nights at least, although she hasn't had much of a chance with the current lockdowns.

Claire bought the vehicle a month before her friends recommended two men on Instagram who fit out vans, @VansbyDan. They are based in Bennetts Green.

"I saw them post their first walk-through video. I felt like I should be able to trust these guys with this job.

"I gave them a brief idea of what I wanted, and then they were like 'OK, cool'," she says.

Claire wanted a slot for her boards and fishing rods and a pull-out kitchen without compromising on storage. She wanted a walkway in the front, running water and a fridge. They sorted it out, and more.

"It was just an empty shell before. They cladded the walls, took out the cage for me, did all the woodworking," she says.

"It looks really great, and it's so functional. They did so many extra things I wouldn't have even thought to do."

They gave her a little copper tap, a beer table that she can flip up and lots of extra storage boxes to sit on. She loved the limewash finish on okoume plywood.

The Dans chatted with the Herald about their vans.

Daniel Thomas is originally from Moruya, on the South Coast, and Daniel Dales-Sutton is from Ocean Grove, in Victoria. They met in the surf, and years later ended up being in Newcastle at the same time.

"We grew up with a coastal lifestyle, which is pretty inherent to driving a van around and looking for surf as much as possible," Thomas says.

"I was doing it on my own last summer, fitting out vans. Dan and I had always wanted to do this together. We'd been mates for seven years and finally in the same space at the same time," Dale-Sutton says.

"We thought 'why not make it happen, create a lifestyle and business?'"

Vans by Dans started just two months ago, and they've been flat out for most of that time. They've fitted out six vans so far and they have nine more booked.

People find them through Instagram and word of mouth. Often their customers, like Claire, own a van or plan to buy one. They come to the Dans with ideas and the pair use their skills to make it happen.

Before starting their business they'd fitted out their own vans. Dale-Sutton has a background in furniture restoration. Thomas has done every job you could think of, and he loves working with wood. They both love designing.

Every van they work on is different. They tailor to all budgets, but always work to make it nice.

"Anyone can build a box out of plywood. Our finishes are really good. We've learned how to make things really neat and clean and beautiful," Dale-Sutton says.

"We love to focus on Round 2 Timbers. In every other van, we focus on using recycled locally sourced hardwood."

Currently it's just the two of them, but they joke that if they hire a third, their name must be changed to Dan too.