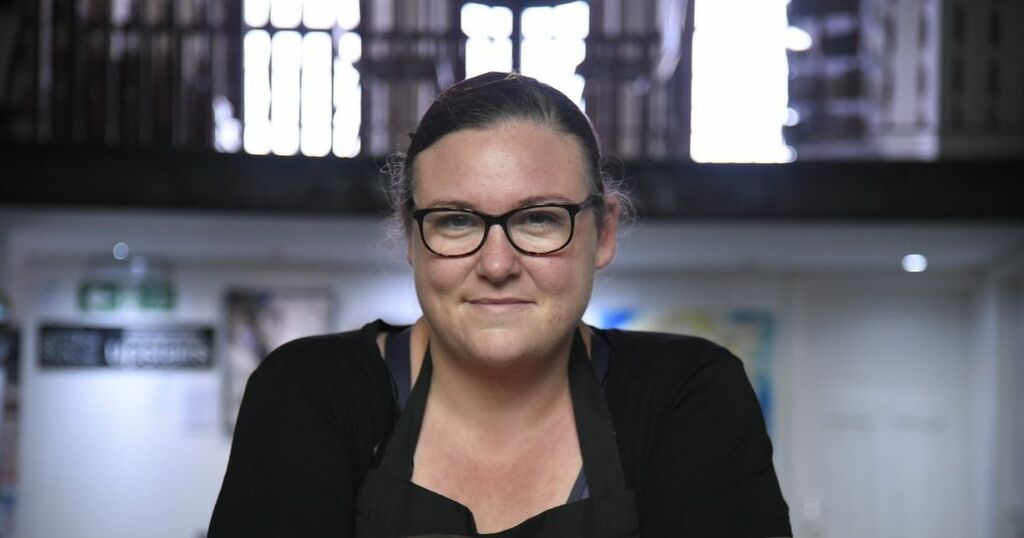 A teacher who made it to the final stages of MasterChef has taken on her own vegetarian café which she has called a “gorgeous hidden gem”.

Fran Keirle and her husband Paul Keirle, both qualified teachers, took over the running of the café at Barnabas Art House near Newport city centre in Pill last month, after seeing it advertised on social media.

Fran, who made it to the final 12 of MasterChef in 2015 - when Simon Wood won the competition - left her role as an English teacher at Caerleon Comprehensive in June, and said the time was right to take on a new challenge.

“I was browsing Facebook and Instagram at night and had had a couple of glasses of red wine,” she laughed, chatting about her new venture while surrounded by dozens of brilliant pieces of artwork at the gallery.

“I saw an advert for this beautiful space. It’s got such a presence. I had no idea it was here. It is a real hidden gem, it’s marvellous.

“If it wasn’t for the instability in teaching at the moment I’d have probably scrolled straight past [the advertisement]. But it was the right time."

Fran said she had become frustrated with parts of the teaching industry, which aligned with her ambition to give it a go in hospitality.

“I thought ‘why not?’, let’s give them a call, because through Covid teaching has changed a lot,” she said.

“So many agencies are involved now, making sure you’re doing a super top job, and yet these people often have very little teaching experience themselves. Having everything scrutinised in that way I found demeaning.

“Teaching during the pandemic was tough, especially adapting to online. Centre determined grades, and lots and lots of meetings between department members. One would think someone deserved a C [pass] but we’d already have 25 more Cs than last year, and then who loses out? It was a bit of a car crash to be honest. I felt sorry for the kids.”

Despite her MasterChef history, the mother-of-four said she felt “huge risk” in swapping the classroom for the kitchen.

“I didn’t know what was going to happen, whether it was going to fold quickly,” she said. “I had security as a teacher, and there isn’t that in hospitality. You just have to look at Lower Dock Street [Newport city centre] to see all the coffee shops shut. But I thought now is the right time to be adventurous, and it’s started really well.”

She knows of the interest in her history on MasterChef, and doesn’t mind it.

“I think it’s a good thing,” she said. “I remember going back into school after the Easter holidays, when it aired, and the kids were saying I’d ‘never guess’ that they saw me on the telly. It was funny what they came out with.

“But I think it can help now. I hope it shows that I’m an accomplished chef, and I’m not just going to come in and make you sandwiches and paninis.

“I loved being in the professional kitchen and doing those super intricate meals. My whole thing is nice portions of hearty food that is really special, but I think John (Torode) and Gregg (Wallace) were saying they needed to refine me a bit!”

It’s quite different at Barnabas House. The kitchen is small, but it didn’t put Fran off, and she’s convinced it has potential to be a “real destination”.

“We’ve put our stamp on it a bit, and we have replaced some things,” she said.

“I didn’t want to serve pod coffee, I wanted a quality product. This has the potential to be a destination and you won’t get that without care and attention. That comes from having the right equipment and the right produce.”

The gallery, which is based on Ruperra Street a stone’s throw from Commercial Road, is home to an array of talents including a filmmaker, a creative writer and a ceramicist.

“We’ve had a lot of negativity here [in Pill], but I think this community has a heart of gold with a core that comes out and supports each other,” Fran said. “If you negatise an area it will create further negativity. I think this is a destination for the arts, for people who want a hidden gem, for somewhere to experience the real life of Newport. It’s areas like this that are ripe for improvement and growth.”

Looking forward, she hopes to create a Welsh-based chain of eateries.

“I want to feed people and for people to say ‘that’s delicious’. You can’t beat that. If I can make a living out of it then even better.

“My hope is that one day lots of people from different places are eating food that I’ve developed.”

Get the best stories sent straight to your inbox, find out how here.