‘Mass’: Parents of a school shooter meet parents of a victim in searing film drama 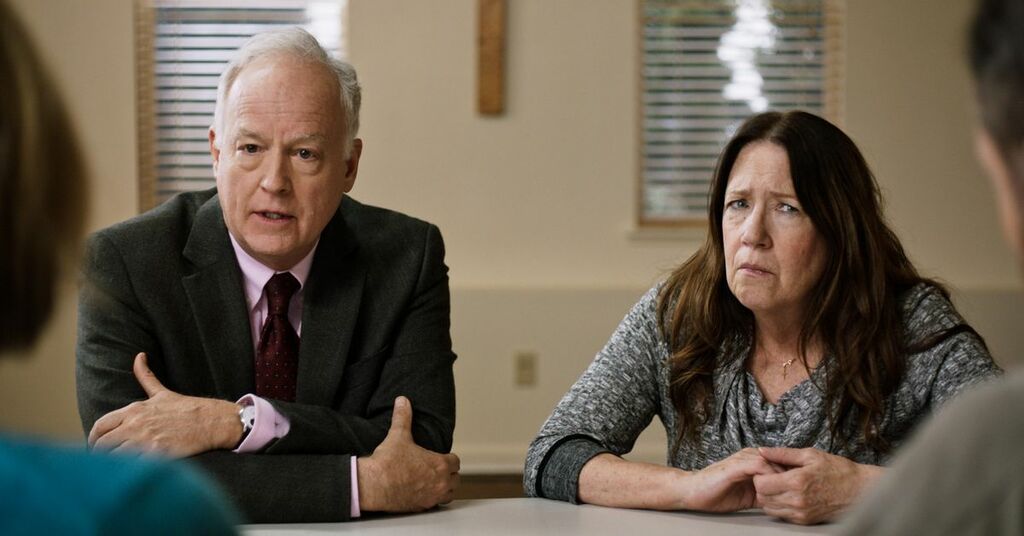 We never hear the crack of a gun nor do we catch even a glimpse of a fallen victim in the searing and heartbreakingly effective chamber drama “Mass,” and yet this is a story borne of violence, a story about the aftermath of a tragedy and how it has caused immense and irremovable collateral damage for the loved ones of those involved in a horrific event many years ago.

Writer-director Fran Kranz’ tightly constructed, almost unbearably raw and naturalistic film is set mostly in a basement room beneath a small-town church, where a parish volunteer named Judy (Breeda Wool) is nervously setting up a table and chairs, hoping to get it just right, as the no-nonsense social worker Kendra (Michelle N. Carter) coaches Judy about where to place a box of tissue, and by the way, those snacks on the side table weren’t really necessary, because this won’t be a social gathering.

Enter two middle-aged couples: Gail (Martha Plimpton) and Jay (Jason Isaacs), and Richard (Reed Birney) and Linda (Ann Dowd). Left alone in the room, they exchange awkward pleasantries, make innocent inquiries about their respective families, thank each other for agreeing to this meeting. Gail takes out a handful of photographs. Linda has brought a jar that meant something special to her son.

We can feel the weight of all that is unsaid, until they start saying it. Richard and Linda’s son Richard was a deeply troubled boy with a history of erratic behavior who showed up at the high school one day with guns and a bomb and killed 10 classmates before taking his own life. Gail and Jay’s son Evan, their precious and sweet and innocent boy, was one of the victims.

In the years since then, Richard has become an outspoken advocate, Gail has never been able to let go of her grief, Richard and Linda have divorced. Gail and Jay want to know if there was anything Richard and Linda could have done to prevent their son from reaching such a dark and violent place; Richard and Linda have expressed remorse time and again for Evan’s horrific killing spree, but they’re also resentful because they were bombarded with death threats and publicly shamed, and they weren’t given the opportunity to give their son a memorial service. Hayden was the 11th victim; he was their son. Gail and Jay really don’t want to hear that.

“Mass” feels like a staged play brought to the cinema, with unobtrusive camerawork that gives us the feeling of eavesdropping on this intense and emotional and hopefully cathartic gathering. All four members of the primary ensemble deliver empathic and powerful performances, with Plimpton’s Gail nearly paralyzed by years of mourning, Isaac’s Jay brimming with anger, Dowd’s Linda desperate to provide some measure of comfort to everyone and Birney’s Richard sincerely regretful but also impatient and almost resentful he has to be here.

As these four wounded people talk about possible contributing factors to Hayden’s descent into madness, issues of gun accessibility, mental health, violent video games, the parents’ responsibility in getting help for a troubled child, etc., are raised — but that room beneath a church is a microcosm for a country that has debated those issues for years, even as mass shootings have become so obscenely routine they’re not always front-page news anymore.