The film has found great appeal across metros and small towns even though unlike Spider-Man, Doctor Strange is not entirely children-friendly and is suited to a more mature audience, analysts said. Yet theatres owners swear by the Marvel brand and expect that the film will make around ₹25-30 crore on opening day.

Released last December, Spider-Man had made Rs. 32.67 crore at the box office on its first day and finished with lifetime earnings of Rs. 218.41 crore while the first Doctor Strange instalment released in 2016 had started with opening day figures of Rs. 2.63 crore and ended its theatrical run with Rs. 25.2 crore.

“The buzz around Doctor Strange is fantastic and it’s tracking much like Spider-Man did in December. This just reinforces the undisputed hold that Marvel has built over fans in the country over so many years, a significant chunk of whom support each of its films," Kamal Gianchandani, chief executive officer at PVR Pictures Ltd said. While the Marvel fan base in India is dominated by the 15-35 age group, there is a 60:40 skew in favour of men, Gianchandani added.

Vishek Chauhan, an independent exhibitor in Bihar’s Purnea said the advance bookings for Doctor Strange in his town were surpassing those for period drama RRR released late March, and were second only to K.G.F: Chapter 2.

“The only constraint for these Hollywood films is that they can only release in DCI (Digital Cinema Initiatives)-compliant theatres but that is made up for by just how crazy people are for these brands,“ Chauhan said. DCI is a joint venture of several film studios, including Metro-Goldwyn-Mayer, Paramount Pictures, Sony Pictures Entertainment, 20th Century Fox, Universal Studios, The Walt Disney Company and Warner Bros, to set up a common set of requirements that ensure a high and uniform standard of digital cinema viewing. However, given that last week’s Eid releases—Heropanti 2 and Runway 34 have failed to find any draw, Chauhan foresees a smooth run for Doctor Strange, with a weekend of Rs. 70-80 crore and lifetime collections of Rs. 150-175 crore.

Ashish Saksena, chief operating officer, cinemas at ticketing site BookMyShow said the strategy of distributors Walt Disney Studios to open up advance bookings several days earlier than the usual window has paid off. “So far, the English language version of the film while naturally leading the ticket numbers, is closely followed by the Hindi version. Cinephiles from Bengaluru, Mumbai, Pune, Chennai, Hyderabad, Delhi NCR, Kolkata, Trivandrum, Guwahati and Coimbatore have been among the first to get their hands on tickets in advance," Saksena said.

Doctor Strange, one of the most popular characters of the much-loved Marvel Cinematic Universe, more so since the release of Avengers: Infinity War and the finale Avengers: Endgame, has an extremely strong screen presence helmed by Benedict Cumberbatch, who also enjoys a strong fan following in India and the second part of the movie franchise has been hugely awaited for a long time now, Saksena added.

“The popularity and fan following of the Marvel Cinematic Universe and the movie releasing in quick succession of the previous blockbuster in this league, Spider-Man: No Way Home, is set to provide great momentum to this sequel," Saksena said. Previously, it was commonplace to have movies made about just one or two select superheroes, however, the Marvel Cinematic Universe has probably been the only one to successfully create sub-plot movies and mini-series that give a life of their own to key supporting characters and these have been gaining more popularity with cinephiles rushing to catch these films time and time again, Saksena added. 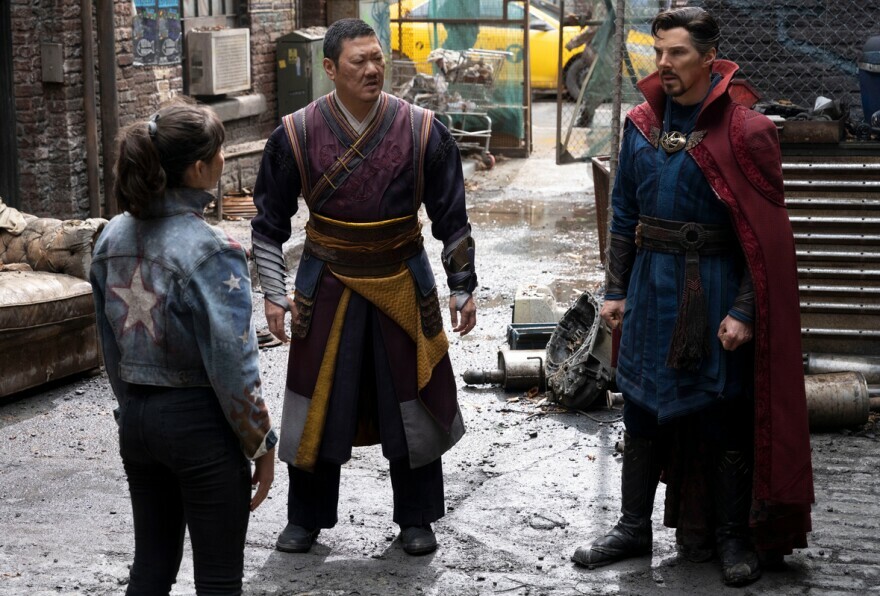 Marvel's 'Doctor Strange In The Multiverse Of Madness' is all over the place
The latest MCU film is at its best when director Sam Raimi leans into its horror elements, and at its…

WEKU
One subscription that gives you access to news from hundreds of sites
'Doctor Strange In The Multiverse Of Madness' box office early estimates: Benedict Cumberbatch starrer set up for Rs 30 crore opening; could beat 'Spider-Man: No Way Home'

Benedict Cumberbatch has unleashed the 'Multiverse Of Madness' in India and the proof's in the smashing box office numbers.

The Times of India
Q&A: Victoria Alonso on superheroes, multiverses and movies

Marvel Studios’ Victoria Alonso has helped steer Marvel's cinematic juggernaut for more than two decades, and this week audiences are…