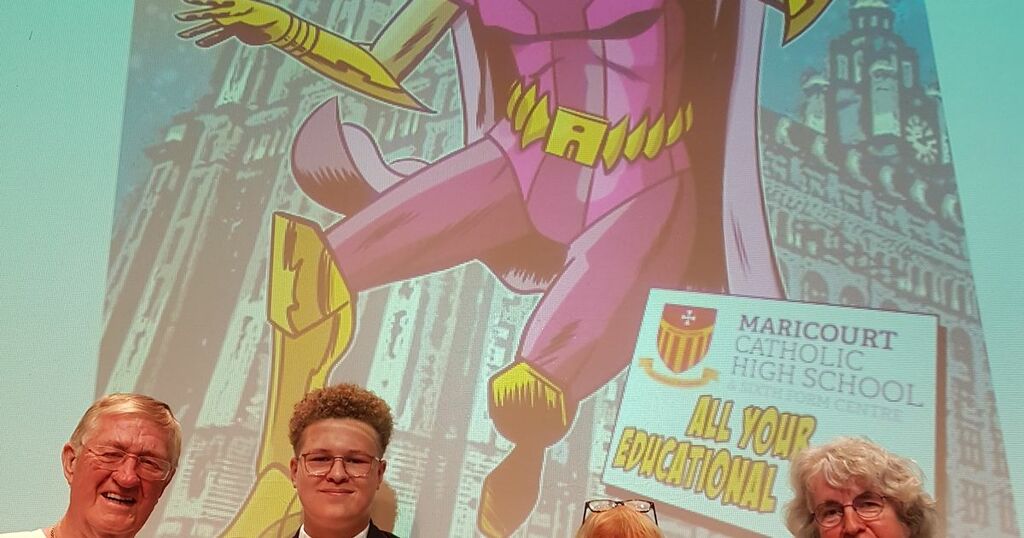 Thousands of Liverpool city region schoolchildren took part in a competition which saw a key figure from Marvel Comics hand out prizes.

Khan Odita, 14 is a community activist in Liverpool 8 and is an ambassador for the Liverpool Heartbeat Charity, who held a special event at Bluecoat Chambers in the city centre.

Khan's role as the ambassador for Heartbeat involves him attending events, helping to spread the word of the charity and also producing videos for their events.

The event saw a competition that gave up to 150 secondary and primary (from schools across the six Liverpool City councils) the opportunity to win a small library of books. Gifts of vouchers were given to 12 second and third placed children and a further five received them in the special commendations category.

The prize giving event saw 23 children in total receive prizes for the Liverpool Heartbeat Superhero competition, which involved about 5,000 children taking part from the six councils.

In all, children from about 50 schools eventually took part, with entry being conditional on the school entering on their behalf.

On the day there were six first prize winners who received a one-off cover drawing from Liverpool’s Tim Quinn, Marvel Comics head of special projects for London and New York. Each title was framed and featured the winning student and their school in a super-heroic pose.

Two children from Liverpool 8 were represented in the prizes, Jacob Bennett from Abbots Lea School received vouchers in the special commendation category, and Leon Harry was one of the six first prize winners and received one of the framed pictures of himself in a super hero pose and a copy for his school.

Khan has only recently become Heartbeat’s young ambassador and Liz McGovern was impressed with his work. Khan said: “I met Liz, a volunteer (and organiser of the day's event) for Liverpool Heartbeat, at the PAL Centre for Pakistan independence day in Toxteth.

“When she saw the video I produced for them she thought it was brilliant and got me on board with Liverpool Heartbeat.”

Heartbeat was set up by Robin Baynes MBE in 2002.

The charity was formed in memory of Robin’s life-long friend and fellow swimmer, who unexpectedly died of heart failure.

Khan said about being an ambassador for Heartbeat that: “This role is important to me, as Liverpool Heartbeat is such a force for good in Merseyside and I'm really happy to help support them.”

Robin added: “Tim Quinn just said to me that one of the teachers said to him about a student, who said ‘this has been the best day of our life,’ - wow, it had that impact”.

Youth ambassador Khan has also been campaigning for a piece of unused land near his home to be used as a community garden.

Khan said: “I founded Mulgrave Street Action Group L8 (MSAGL8), during the summer holidays, so that there can be a body for good in my community.

"My first project is to turn a fly tipped space into a community garden, which will house an allotment, raised flower beds, bushes, seating, and perhaps some learning installations for people visiting the area”.

He said he was proud of his community, but saddened by the lack of green spaces.

Mum Natasha said about Kahn’s community work: “I am incredibly proud of Khan, he has done so well. For him to be an ambassador for Liverpool Heartbeat is just so overwhelming. Liverpool Heartbeat are doing such a marvellous job to showcase the skills of children and encourage them to be more creative.

“Khan is a creative individual and to be involved in that and to be representing that, is just phenomenal. I’m incredibly proud of what he’s doing and fully support him”.

The winner of the mini library was Woolton High School in Liverpool.

Find out more about the work of Liverpool Heartbeat via their website: https://www.liverpoolheartbeat.co.uk/

'Larger than life' dad of five, 35, dies suddenly on holiday