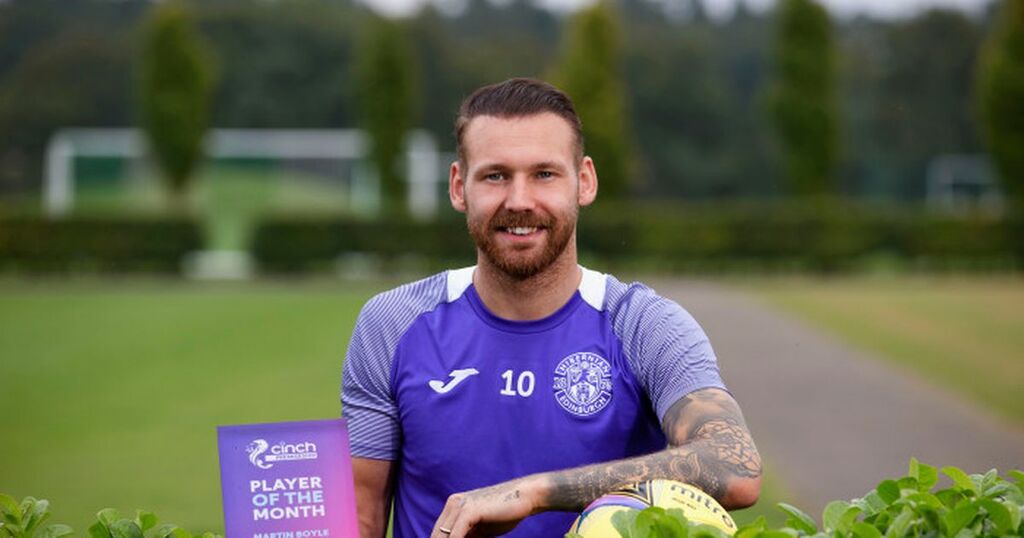 Martin Boyle has missed supporters at games so much that he’s even looking forward to taking abuse from Hearts fans tomorrow.

Hibs head to Tynecastle for the first Premiership Edinburgh derby in 18 months in what will be their first foray to Gorgie since December 2020.

On that occasion, it was Boyle at the double as his brace earned the visitors a 2-0 win, with the hosts languishing at the bottom of the table.

Since then however, they’ve lost 3-1 at Easter Road and 2-1 at Hampden to their city rivals.

But the August Player of the Month can’t wait to make his return in the fixture with both teams riding high at the top end of the table.

And a repeat of his Boxing Day antics would be just the ticket.

“We know the calibre of the game and what’s at stake,” said Boyle.

“Nothing will be won or lost here, it will be bragging rights and a chance to go to the top of the table.

“There is a right buzz around the place and we will be looking to keep that going by winning the game.

“It’s great we will have fans there, it adds to the atmosphere and it’s great to see.

“We have missed the fans a lot so I am kind of looking forward to taking a bit of abuse from the home fans!

“At the same time, it’s something the away fans are going to love - the atmosphere will be amazing.

“It would be great if it was like last time. That was a great occasion and we have great memories from it.

“It’s memories like that that people remember and look back at.

“Being top is great for Edinburgh, it adds more spice to the game and we will be going there looking to win.

“But it’s the same for Hearts, they will be feeling that equally as well.

“On a personal level I’m delighted to get the award.

“It means I’m doing well and the club is doing well.”

Looking longer term, Boyle has his sights set on higher than third if Jack Ross’ men can maintain their early season form, and insists splitting Rangers and Celtic has to be the target, even if it has proved difficult.

He explained: “It’s always something you’d try to do but over the last few years it has not been as easy as that.

“With the squads they have and the backing they have, it’s always going to be challenging for the other teams.

“But we have started well.

“It’s always important for teams like us to take it game by game but if we keep getting results and can take points off them we’d be in a fantastic position.

“At the same time, if we can get more consistency than last season then as a club we’d certainly be up there.”