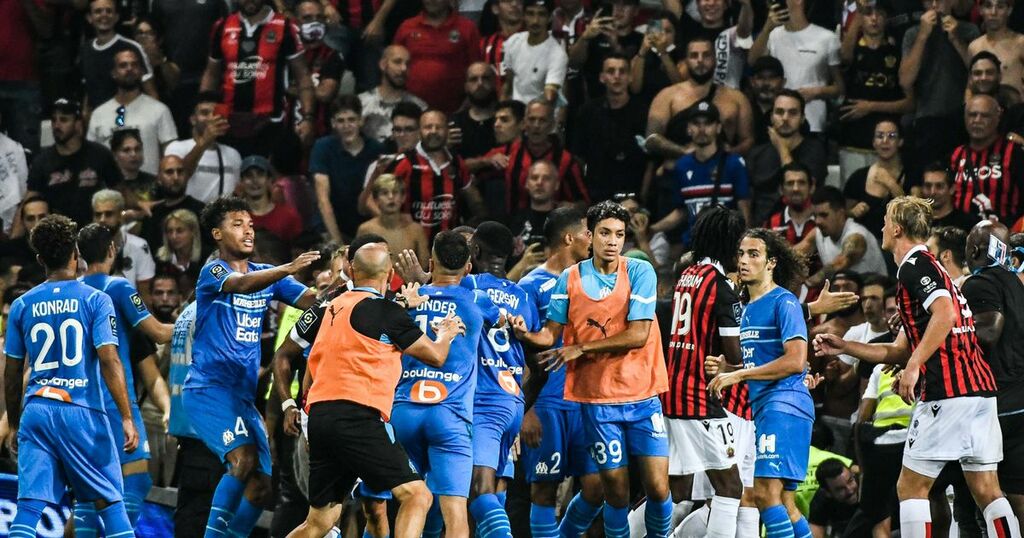 Marseille's physio has been banned for the rest of the season following his involvement in a mass brawl during his team's match at Nice in August.

Pablo Fernandez is adjudged to have punched a home fan in the melee and has been handed the most severe punishment of numerous which were handed out by the French football governing body.

The Ligue 1 encounter was abandoned after Nice supporters stormed onto the pitch during the closing stages, leading to a violent scenes between fans, players and staff.

The hosts, who were leading 1-0 thanks to Kasper Dolberg's opener, have been docked one point in the French top flight after a bottle was thrown at Marseille and former West Ham United midfielder Dimitri Payet at the Allianz Riviera, who was preparing to take a late corner-kick.

The 34-year-old retaliated by hurling the bottle back into the home end and supporters then broke through security to encroach the pitch.

Payet has been handed a suspended one-match ban, with Spanish defender Alvaro Gonzalez given a two-match ban.

OM physio Fernandez will not be returning to the pitch or touchline at any point throughout 2021-22, though, with authorities ruling his actions warranted such a lengthy ban.

The Ligue de Football Professionnel (LFP) issued a statement on the incident.

"Meeting this Wednesday, the Disciplinary Commission of the LFP ruled on the incidents which punctuated the match of the 3rd day of Ligue 1 Uber Eats between OGC Nice and Olympique de Marseille," it outlined.

"After reading the investigation report in the presence of the two clubs, the Commission decided to replay the match on a relocated field. In addition, two penalty points were imposed on OGC Nice, including one suspended point.

"Regarding the players, defender Alvaro Gonzalez received two games of suspension. As for his teammate Dimitri Payet, he was sanctioned with a suspended match."

The replay of the match is set to be played at a neutral venue behind closed doors.

Nice's point deduction is actually two, although one of them is a suspended punishment.

The immediate deduction means that Christophe Galtier's side, the manager who led Lille to a shock title win last term, drop to fifth place in the Ligue 1 table, having played three matches.

They trail Marseille by one point after Jorge Sampaoli and co picked up six points from their opening trio of games.

Nice president Jean-Pierre Rivere accused Arsenal youngster Matteo Guendouzi, on loan at Marseille, of lying about his injuries sustained in the brawl after an image was posted showing what appeared to be strangle marks around his neck.

It was disputed by the visitors' director of communications, Jacques Cardoze, who said: "There are cuts, we had an independent doctor in Marseille. There will be medical certificates.

"These are elements that will allow the investigation of the League and the disciplinary committee to be carried out," stated Cardoze.