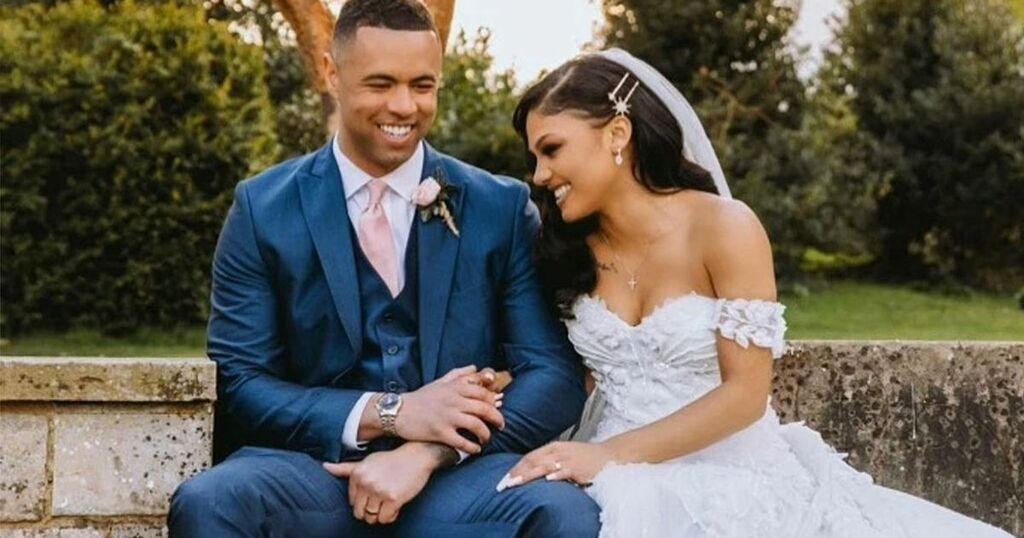 Married At First Sight couple Jordan and Alexis have had their romance rocked by allegations that he was in a long-term relationship until days before the show aired.

Allegations have emerged to suggest 27-year-old personal trainer Jordan had been in a relationship with a 26-year-old nurse for 11-years before he dumped her to feature on the explosive E4 show.

Viewers watched this week as Jordan, dressed in a blue suit, nervously swapped vows with 28-year-old Alexis – who stunned in a white wedding gown for their big day.

But in the aftermath of the episode, a woman has stepped forward via social media to claim Jordan had been dating her mate for more than a decade – and only dumped her two days before the new series aired.

And further to the bombshell claims made on social media, The Sun have suggested that Jordan and Alex: “have already split after he ran back to his girlfriend.”

The sensational claim follows allegations by a Twitter user who uploaded a string of photos of Jordan and his alleged former girlfriend together.

They wrote online: "Imagine having a stunning Mrs of 11 years and disappearing to film a tv show to get 15 mins of fame."

She added: "Jordon is an absolute clown."

Photos showed Jordan posing with a brunette woman – who on Instagram claims to be a 26-year-old nurse from Wales – on holiday and at graduation ceremonies together.

One shocked Married At First Sight fan replied to the social media posts to state: “What a trash man!!! You’re friend is beautiful!! Please say she has dropped him like a bad habit!!”

In scenes that aired on Monday nigth, Jordan was shown expressing his hopes of finding true love via the reality series.

He said: "My happily ever after would be to learn stuff about myself that I didn’t know before.

“I want to become stronger as a person and to obviously walk away with a partner and with some new friends."

Meanwhile, new-wife Alexis’s mum drew amusement from viewers when she described their wedding ceremony as “dry”.

Updating fans amid the accusations that the marriage is over, Alexis shared a snap of herself with her husband on Instagram.

She wrote alongside it: “What a wedding episode! Clearly my mum found the wedding boring. But Whats your thoughts on the experts matching me & Jordon together?”

And later, she shared images of herself with her bridal party, writing: “I honestly could not have done this process without the support of my nearest & dearest by my side. I love & appreciate you guys so much.”

Fans seem torn over the couple's compatibility with one taking to Instagram to comment on Alexis's post, writing: "Not to sure on the match yet… but you looked beautiful and are so refreshing! Your laugh is so contagious! Rooting for you."

While another unconvinced follower wrote: "I feel like you & Ant would be a better match."

Married At First Sight UK airs on E4 on Monday's at 9pm.