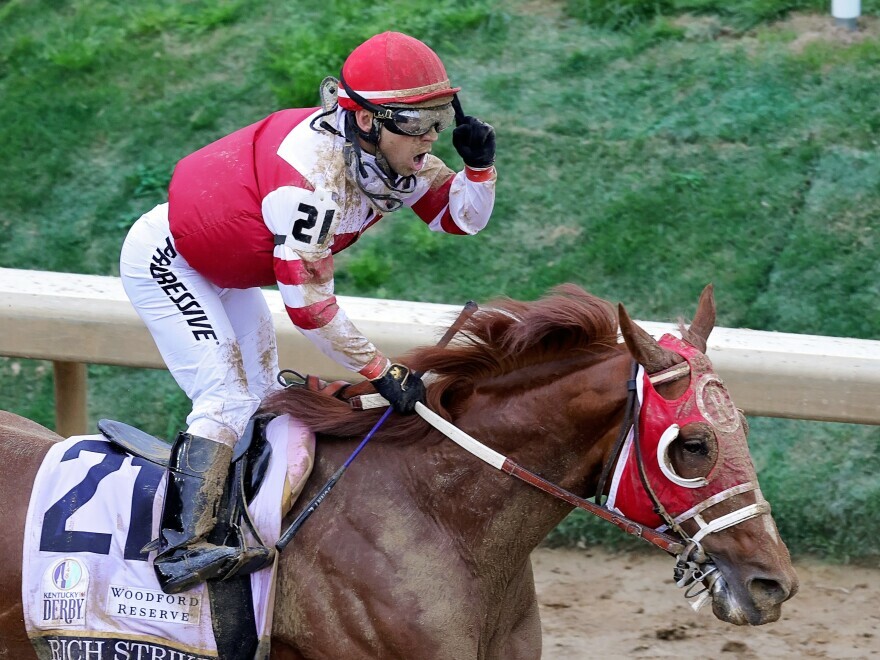 Kentucky Derby winner Rich Strike won't race at Preakness Stakes
Rick Dawson, owner of Rich Strike and RED TR-Racing, said the horse will skip the next stop of the Triple…

Rick Dawson, Rich Strike’s owner, released a statement Thursday saying they will instead look towards the June 11 Belmont Stakes…

Rich Strike's quest for the Triple Crown is over

Newsroom.co.nz
Denny Hamlin: "You got to play by the (expletive) rules"

LEXINGTON, Ky. — If you’ve watched NBC Sports broadcasts of major horse races like the Kentucky Derby, you know that Kenny Rice often interviews the winning trainer only seconds after a race is run.

That does not occur by happenstance. “You kind of try to handicap these (races) yourself,” Rice said Wednesday.

That’s why, for the 148th running of the Kentucky Derby, Rice positioned himself on the third floor of the Churchill Downs grandstand. He did so to be near to trainers Steve Asmussen and Chad Brown, the conditioners of Derby favorites Epicenter and Zandon, respectively.

Deep into the stretch drive, with Epicenter and Zandon battling for the lead, Rice’s race handicapping looked impeccable.

And then it wasn’t.

As you well know, a historic long shot, the 80-1 Rich Strike, made a startling, late surge along the rail and gave the 2022 Kentucky Derby a winner all but no one saw coming.

“Basically, I was up there with John Calipari when I should have been on the floor with Shaheen Holloway,” Rice says, employing a college basketball metaphor. “I’ve got to say, I never saw Rich Strike coming.”

Rice says he thinks the nation sees Rich Strike’s Derby win as a larger upset than the 2022 NCAA Tournament stunner when No. 15 seed Saint Peter’s, coached by Holloway, beat No. 2 seed Kentucky, directed by Calipari.

“I will say in Kentucky, we might say Saint Peter’s (was the bigger upset),” Rice says. “I think the rest of America, they might say Rich Strike (was the more unlikely outcome). If you add it up, 80-1 odds are greater than what the Peacocks (who were 18-point underdogs) faced.”

Like Rice, many entered the 148th Kentucky Derby thinking the most-likely dominant story would either be:

A.) Epicenter finally giving Asmussen, the winningest trainer in North American history (9,746 race wins), a Derby victory after the initial 23 horses he saddled in the Run for the Roses failed to win.

Instead of an interview with the Derby-winning trainer, however, Rice instead wound up ideally positioned to observe two of the top trainers in the U.S. as they endured an unusually sharp disappointment.

“(Asmussen) had his family up there, his boys with him,” Rice says. “His brother, Cash (Asmussen), who was a great jockey, in Europe especially, (was with him).”

Once the race ended in that old, familiar Derby disappointment for Steve Asumssen, “he just kind of had a little grimace on his face,” Rice says. “He just shook his head.”

As for Brown, “it was the same,” Rice says. “There was no visible frustration. I think, like everybody else, they were just surprised (by Rich Strike’s win). But these guys know the deal. They know crazy things can happen in horse racing.”

Rice says that ever since NBC didn’t mention the back story of Funny Cide, owned by a group of friends who had gone to high school together, on its broadcast of the 2003 Kentucky Derby — only to see the horse win the race — that the network has tried to make sure that every horse entered in a Derby at least “gets two or three sentences” on its pre-race show.

For Rich Strike, who Dawson announced Thursday will skip the Preakness, Rice says the story of the 2016 barn fire caused by a lightning strike that devastated trainer Reed’s operation, killing 23 horses, was the predominant pre-race narrative identified by NBC.

“Not for a story, but a couple of sentences in the broadcast,” Rice says.

Sonny Leon, the unheralded jockey who would give Rich Strike a masterful ride in his first Kentucky Derby, was little-known to NBC.

“The morning of the race, we always have a meeting with Larry Collmus, who is calling the race, and we go over the pronunciation of everybody’s name,” Rice says. “Sonny Leon comes up. We’re asking around, ‘Does anyone know much about him?’

“We vaguely knew of Sonny Leon from Thistledown (a track near Cleveland, Ohio). But nobody could really say for sure if they had ever interviewed him. And our staff, we’ve covered a lot of races and none of us ever remembered talking to Sonny Leon.”

A Floyd County native and a former sportscaster (1980 through 1999) at Lexington television station WTVQ, Rice, 65, has now been working as a reporter on NBC horse racing broadcasts for the past 23 years.

In that time, the 2015 Belmont Stakes, when American Pharoah clinched the first Triple Crown since 1978, is the greatest race he’s covered, Rice says.

The exhilaration of Rich Strike’s unlikely win and the compelling back stories of his connections have moved the 2022 Kentucky Derby into the top five of his NBC era greatest-hits list, Rice says.

“There’s just been so much controversy, disqualifications, around the Derby the past few years,” Rice says. “(Rich Strike) is a story that all of us that cover racing, we probably all needed.”

Kentucky Derby winner Rich Strike won't race at Preakness Stakes
Rick Dawson, owner of Rich Strike and RED TR-Racing, said the horse will skip the next stop of the Triple…

Rick Dawson, Rich Strike’s owner, released a statement Thursday saying they will instead look towards the June 11 Belmont Stakes…

Rich Strike's quest for the Triple Crown is over