It has been described as the heart of the city.

The theatre was "some kind of Mariupol calling card", she says.

"Every evening some bands, street musicians — usually teens — near the theatre were playing and singing. Every evening there were a lot of people."

She recalls going to the winter ball there when she was just six or seven years old.

And, when the theatre reopened in 2018 after renovations, the city put on a celebration, with the forecourt alive with rides and light displays.

"Mariupol had never seen before so many lights," the 26-year-old told the ABC from Turkey, where she is currently living.

It was being used as a shelter by civilians when it came under attack on March 16.

Rescuers are trying to reach the survivors, with reports that hundreds of women and children may, miraculously, still be alive.

Officials in the Mariupol mayor's office said they do not yet have a casualty toll.

The theatre had become a refuge for the vulnerable, who thought they would be safe.

On March 14, the words "дети" — or "children" in Russian — were photographed by satellites after being etched into the ground on either side of the three-storey building.

Human Rights Watch says the civilians had spelled out the giant words in tape, hoping the laws of war would be respected.

However, Russia has been accused of targeting the site, in an act the mayor has called "genocide".

"Russia purposefully destroyed the Drama Theatre, where hundreds of people are hiding," Mariupol city authorities said in a statement on Telegram.

Russia has denied it carried out the air strike against the once-majestic building, one of the centres of Ukrainian theatrical culture in the Donetsk region.

Instead, it  has accused the Azov Battalion — a far-right Ukrainian militia — of blowing it up, RIA news agency said.

Civilian targets not spared in onslaught

Nowhere has suffered more than the encircled city, where local officials say missile strikes and shelling have killed more than 2,300 people.

Residents fleeing the city have spoken of bodies left to rot on the streets, and of navigating minefields and Russian air strikes in their escape.

The seaport of 430,000 has been under attack for almost all of the three-week war, and civilian targets have not been spared.

Mariupol city council said on Thursday about 30,000 residents had managed to escape so far, but more than 350,000 remained stuck there.

Ms Gavra told the ABC her apartment in the outer suburbs of Mariupol was completely destroyed.

A neighbour was able to briefly get an internet signal yesterday to send her the footage of the aftermath of the March 7 shelling.

Although she hasn't been able to reach her family, she has been reassured that her parents and two grandmothers are safe.

They were hiding in the basement when the apartment was struck.

Up to 800 civilians believed to be sheltering in theatre

Hours before the attack on the theatre, Human Rights Watch interviewed more than a dozen Mariupol residents who had escaped the city and arrived in Zaporizhzhia.

They were told that up to 800 people had been sheltering in the theatre's basement.

One of the people they interviewed, a doctor, shared photos she had taken on March 15 which showed people in civilian clothes cooking food on an open fire and carrying water buckets just outside the building.

Belkis Wille — a senior crisis and conflict researcher at Human Rights Watch — said that, at this stage, it can't be ruled out that a Ukrainian military target had been in the area of the theatre.

"But we do know that the theatre had been housing at least 500 civilians," Ms Wille said.

"This raises serious concerns about what the intended target was in a city where civilians have already been under siege for days and telecommunications, power, water, and heating have been almost completely cut off."

Dmytro Gurin grew up in Mariupol.

He has been watching on from an undisclosed location in Ukraine while life as he knew it in his hometown is wiped out.

"Now 80 to 90 per cent of buildings are damaged or destroyed."

The 39-year-old MP left the city when he was 20, but his parents remain there and are now trapped.

"My heart is breaking when I think that they are melting snow for drinking water … and they are running out of food for several days or more," he said.

He described the theatre as the "central beauty" of the city, somewhere that was always full of life.

He fears that it will be impossible to restore the landmark and bring the city back to what it once was. 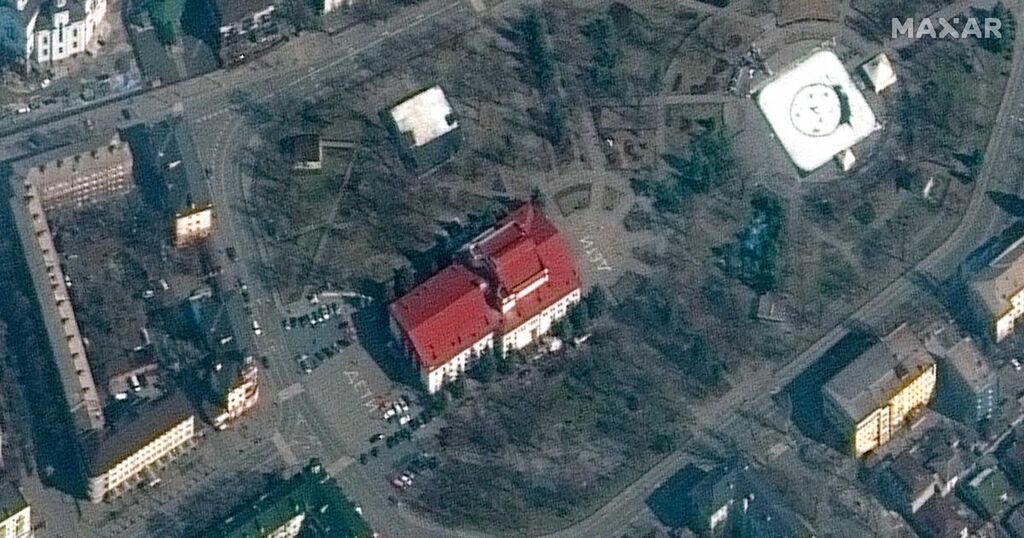 There were fears of hundreds dead after Russia attacked a building that had been sheltering at least 1,000 women and…