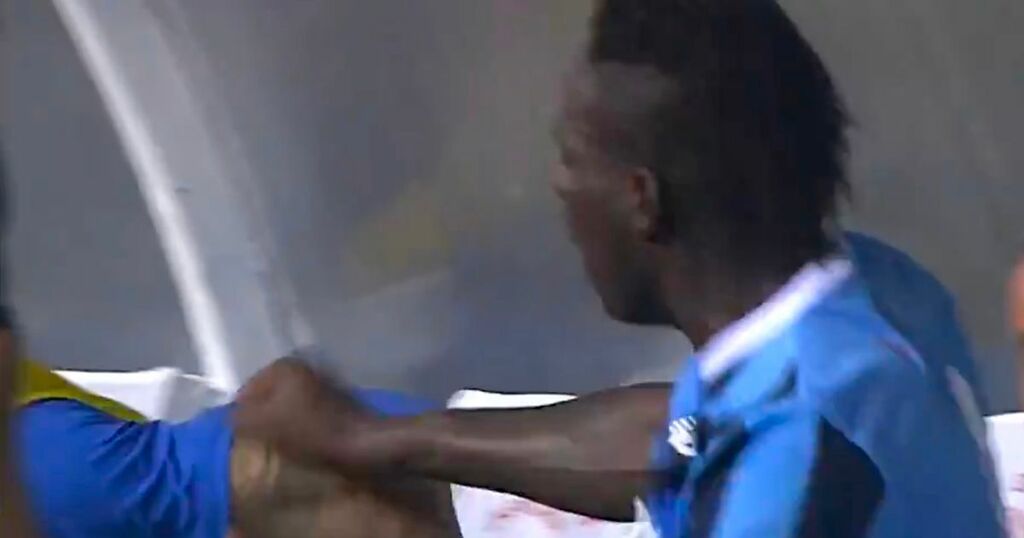 Mario Balotelli's career downward spiral hit a new low recently when he punched a team-mate after being hauled off.

He wasn't the first player to lose it with a team-mate and won't be the last, with tempers often flaring in high-pressure games - and sometimes even in friendlies.

Now playing in Turkey with Adana Demirspor, Balotelli was hooked after 56 minutes with his team drawing 0-0 against Konyaspor recently

The furious former Liverpool and Man City striker threw his shin pads in frustration, shouting at his coach and then punching a team-mate who sat next to him the dug-out.

The player wisely declined to rise to the bait - clearly keen to avoid becoming the latest in a long line of team-mates to have faced off.

Here, Mirror Sport looks at some of the most infamous clashes between players who should have been fighting for a common goal.

Newcastle were 3-0 down at home to Aston Villa, having let in two penalties and had Steven Taylor sent off.

But things got even worse when for the Magpies when Dyer and Bowyer started scrapping, after the latter asked why his team-mate wasn't passing to him.

Bowyer didn't like Dyer's answer - which according to Planet Football was: "Because you’re s**t, basically.”

They were pulled apart by Gareth Barry and Stephen Carr, with Dyer later banned for three games and Bowyer for four, which saw both miss an FA Cup semi-final.

Hartson could certainly strike 'em - and his West Ham team-mate Berkovic discovered what it felt to be the football during their infamous training-ground bust-up.

"If my head had been a ball, it would have been in the top corner of the net," said the Israel star after Hartson's kick to his noggin in 1998.

Big former Welsh forward Hartson was fined £20,000 and banned for three matches, and has said several times it was the biggest regret of his football career.

Blackburn won just one of their six Champions League group games after winning the Premier League title in 1995.

And Batty and Le Saux didn't help when they started brawling just four minutes into their clash away to Spartak Moscow.

With Rovers still searching for their first win on matchday five, frustrations boiled over extremely quickly as the two players questioned each other's effort levels.

They had to be separated by Tim Sherwood after Le Saux threw a punch, and continued to shout at each other during the game.

Afterwards Spartak coach Oleg Romantsev quipped: “I told my players they will be playing against 11 guys ready to fight for each other for 90 minutes… not with each other."

Jens Lehmann earned the dubious accolade of becoming the first Bundesliga goalkeeper to be sent off four times in his career after storming out of his goal to confront Marcio Amoroso.

After Dortmund conceded a late goal to Schalke, Lehmann raced upfield and squared up to Amoroso to earn his second yellow card of the game.

The keeper clearly let his frustration get the better of him as there was a lot riding on the goal - except there wasn't, because it was ruled for offside and the match ended in a draw.

McManaman was just a nipper when he clashed with veteran Liverpool keeper Grobbelaar in a Merseyside derby in 1993.

And their set-to resembled a schoolmaster from a bygone age dishing out some old-school punishment to a cheeky whippersnapper who had overstepped the mark.

Grobbelaar got right in McManaman's face after a poor clearance from the rising star led to Everton taking the lead in a 2-0 win over their fierce rivals.

The keeper gave his team-mate a shove in the face as he marched out of his area bawling at him - earning one back for his troubles as McManaman hastily made his way away from Grobbelaar.

During a 1-0 win over Everton last year, Lloris was unhappy with Son for failing to track back and he confronted his team-mate as they walked off at the interval.

The pair had to be separated by team-mates Giovani Lo Celso and Harry Winks - and Son eventually tracked back all the way into the tunnel as Lloris continued to berate him.

They eventually embraced each other at full-time - with Mourinho describing the overflowing passions as "beautiful".

Arsenal lost 5-1 to Tottenham in a League Cup clash - and as if that wasn't bad enough, Bendtner ended up with a cut nose and a bloodied shirt after a clash with Adebayor.

And Bendtner wasn't the only player to get in the wrong side of Adebayor, who also fought with Kolo Toure in Manchester City training in 2011 as both men prepared to face their former side the Gunners.

With Hearts trailing Raith Rovers 1-0, the team-mates clashed after nearly conceding a second - with far-reaching consequences.

Both men three punches, but Hogg was left needing a stretcher - and to add insult to injury he was sent off along with his captain.

Hogg was handed a 10-match ban, while Levein was suspended for 12 games and was perhaps unsurprisingly stripped of the captaincy.

Ibrahimovic gave a vivid description of the primal emotions involved as he and Onyewu had a tear-up in training in 2010.

"I headbutted him, and we flew at each other," the striker wrote in his autobiography. "We wanted to tear each other limb from limb.

“It was brutal. We were rolling around, punching and kneeing each other.

“We were crazy and furious — it was like life and death.”

The Manchester United strikers' long-running animosity never spilled out onto the pitch - but is one of the most famous feuds in football.

A deadly duo up front for a truly great United side, Cole and Sheringham shared an intense dislike of each other dating back to 1995 when Cole made his England debut.

He came off the bench to replace Sheringham, who Cole felt hadn't acknowledged his big moment as he trudged off dejectedly and declined to shake his hand.

By the time United won the Treble in 1999 they were not on speaking terms - but made their peace 20 years later as they met in a nightclub and shook hands.