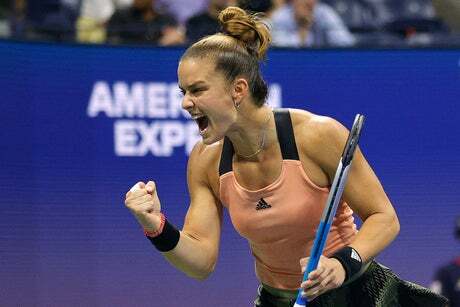 Maria Sakkari has downplayed her tag as favourite to beat Emma Raducanu in their US Open semi-final in the early hours of Friday morning.

Sakkari upset world No4 Karolina Pliskova 6-4, 6-4 to reach the last four of a Grand Slam for the second time this season.

And despite her greater experience on the biggest stage, the 26-year-old world No18 said: “I wouldn’t call myself the favourite. I think we all have equal chances of winning the semi-finals and then winning the title. I would give 25 per cent to each starting tomorrow, then 50 to the two finalists.

“She’s a new player on the Tour so I don’t know much about here. Obviously, she’s having the tournament of her life. She deserves to be here. She has won all these matches.

“It doesn’t matter that she’s lower ranked. She’s a great player. I’m just going to go for it and enjoy it because this atmosphere today was insane.”

Both Raducanu and Sakkari have been praised for their improved mental strength after earlier Grand Slam capitulations.

Raducanu suffered breathing difficulties and was unable to continue in her fourth-round match at Wimbledon while Sakkari failed to convert a match point as she lost in the semi-finals of the French Open.

Looking back on Paris, the Greek player said: “I could have closed that match at the third set. I think I will do things differently this time. But I feel like my tennis is better now than it was at the French. I’m more prepared, I’m ready.

“I’m more mature than before. I proved to myself that I can actually be one of the top players in the world. I think mentally I’ve improved a lot. After reaching my first Grand Slam semi-final at the French, I feel like I can do it again. I’m very excited to play my second semi-final.”

Raducanu was taken to task in some quarters over the way her fairy-tale run at SW19 ended.

But Britain’s Billie Jean King Cup captain Keothavong said: "What happened at Wimbledon was unfortunate of course, but it was all so new to her.

"You've got to remember it was only her third professional tournament back since the pandemic.

"It was all very new, there was a lot going on. But the way she's bounced back has shown everyone who did have their doubts what she's made of. She really is the real deal."