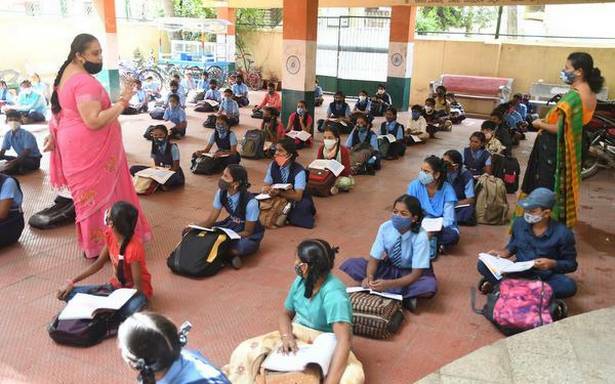 With upper primary schools resuming offline classes on Monday, students right from class VI to X and pre-university, now have the option of physically reporting to classrooms. While schools in urban areas, where access to infrastructure for e-learning is more robust, are reporting poor attendance, that is not the case for those in rural areas.

In fact, many schools in rural and semirural areas have either stopped online learning for classes VI to X, or are considering this option as they are recording higher physical attendance, said management members. While the State government has ordered school managements to conduct both online and offline classes for students, principals and teachers, especially in rural schools, said they were finding it difficult to comply.

“We do not have sufficient teachers to conduct both online and offline classes. Some teachers complained that they were being overworked as they had to handle both classes,” said a principal. In compliance with COVID-19 SOPs, schools with higher enrolment are conducting physical classes in multiple batches to ensure that social distancing rules are followed.

Lokesh Talikatte, State unit president, Recognised Unaided Private Schools' Association, Karnataka, said that many schools had seen very high attendance for high schools and were anticipating upper primary classes attendance to also pick up. “It is pointless conducting online classes when attendance for physical classes is high. Schools are not able to sustain conducting both types of classes,” he said.

Not all parents are happy with this decision. Shalini S., a software engineer whose daughter studies in class IX at a private school, said, “I am teaching my daughter at home and she attends virtual classes. I do not want her to go to school physically until the parents of her classmates have taken doses of the vaccine. The school management should ensure that they conduct online classes when the percentage of students benefited is small,” she said.

On the other hand, many private schools in urban areas have almost done away with physical classes. Some did not open on Monday citing poor response from parents who are unwilling to send their children to school.

Job sites report a surge in searches for teaching jobs

D. Shashi Kumar, general secretary, Associated Managements of Primary and Secondary Schools in Karnataka was of the opinion that the government cannot insist on schools conducting both modes of classes. “In many private schools, parents of even 40% of the students have not paid the fees. It is very difficult to run the school in such circumstances, and the government cannot expect us to run both online and offline classes,” he said.