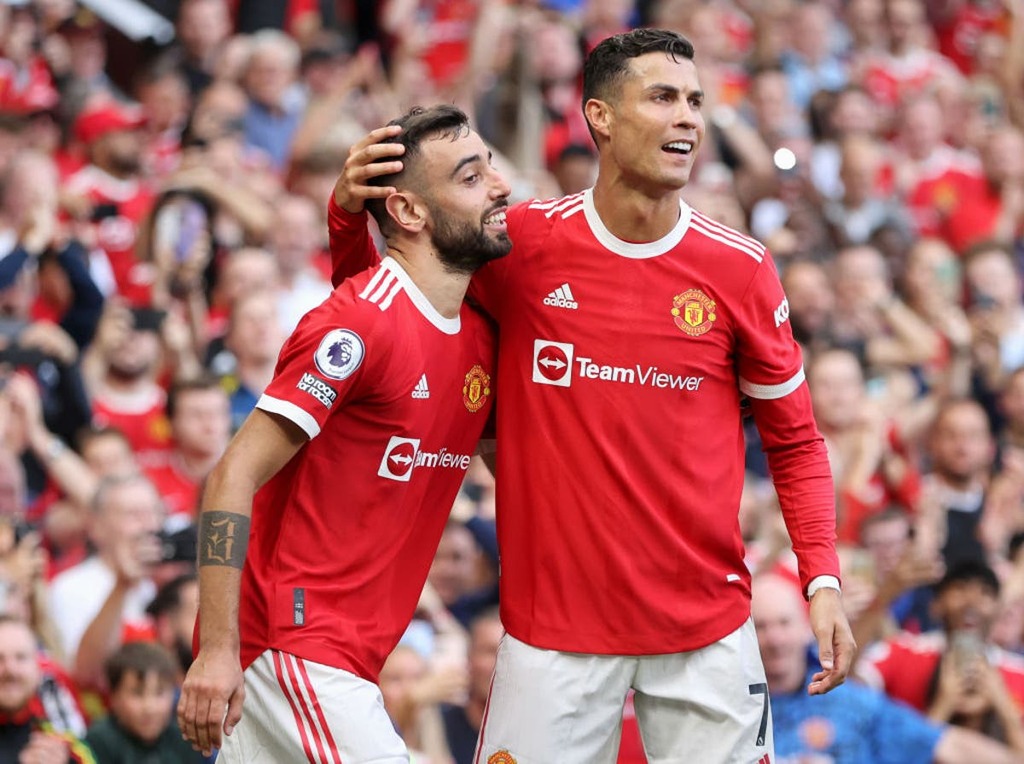 The sight, and sound, of inevitability.

Even Newcastle United’s equaliser’s only served to set up the story of the day, as it afforded Ronaldo a rescue act.

That, naturally, was Ronaldo’s first goal for United in 12 years. It was, to quote another song regularly heard at this stadium, the one they’d waited for.

This was at the standard Saturday 3pm kick-off time but there was nothing standard about the game. Tens of thousands were already at Old Trafford hours before kick-off. The feeling was they had to be there, to soak it in.

That atmosphere escalated as the day went on, getting louder with each signpost moment. There were loud cheers when Ronaldo’s name was announced in the starting line-up. There was a roar when he finally appeared to warm up.

There was deafening noise when he came out in that crisp red kit.

And there was still bedlam to come.

It wasn't all celebration and adulation, mind. Feminist group Level Up announced they flew a plane around Old Trafford, carrying a banner with the words “#Believe Kathryn Mayorga” in relation to the allegations against Ronaldo.

That was missed by most amid the euphoria.

For the home supporters, the day almost had the perfect narrative plotting.

They first of all had the long build-up, not just in terms of the 12 years, but also the day. Newcastle made United wait.

Ronaldo meanwhile showed that perfect striker’s anticipation. As the ball came loose from an unfortunate Freddie Woodman parry after an Isaac Hayden deflection, there was the Portuguese, poised and ready.

The response might be that it was a mere tap-in, but it is no coincidence that truly prolific goalscorers claim so many. It was his 786th career goal and his 119th for United. Given the manner with which the crowd roared in synch with his celebration, it was like he’d never been away.

There was then the match-winner, and the manner of rescue.

Newcastle’s equaliser almost played into the day in that regard, but it was one of a few moments that highlighted potential longer-term issues for Solskjaer.

It was notable that the first goal came when Mason Greenwood decided to shoot rather than cross. Up until then, United had been a little predictable. It was why the game proved some concerns about the signing, as well as obvious reasons for optimism.

Given Ronaldo’s heading prowess, and his more limited mobility as he gets closer to 37 years of age, United spent most of the first half trying to swing in crosses for them. That has never been Aaron Wan-Bissaka’s greatest strength, which was why Newcastle were more content to focus on other attackers.

With United flooding forward to force the issue, their midfield looked even more vulnerable.

It was striking how many times Newcastle punched holes in the structure of the team with direct runs forward. If Allan Saint-Maximin had more end product, it might have needed a much greater rescue act from Ronaldo.

As it was, he just needed to respond to Javier Manquillo’s fine goal. The same issues seen against Wolves presented themselves again. United lack ballast in midfield. At the least, it has long been clear Nemanja Matic can’t do that job on his own. Miguel Almiron surged through the United midfield before feeding Saint-Maximin. Rather than trying to shoot, he this time played the ball on for the overlapping Manquillo to drill the ball past David de Gea.

Maybe this is a vision of the future, though.

The Portuguese isn’t the surging forward he was in his first spell here, but he does keep that devastating speed for the right moments. That came in the 66th minute.

Displaying a level and touch way beyond Newcastle’s moderate defence, Ronaldo smoothly took the ball inside Hayden from Luke Shaw’s pass before firing through Woodman’s legs.

This, naturally, was the loudest cheer of all.

Arguably the best goals of all were still to come.

Fernandes, who had more than once threatened to offer a show-stealer, thundered the ball past Woodman from distance to make it 3-1. United then offered a very different type of strike as Lingard was worked through after an intricate interchange, and curled the ball delightfully into the corner.

The numbers read 4-1 and 120 United goals for Ronaldo. The crowd then got out all the numbers.

It was all so inevitable.

Whether real success follows just as inevitably is now the big question.

Just like in this game, though, Ronaldo offers pretty potent solutions.