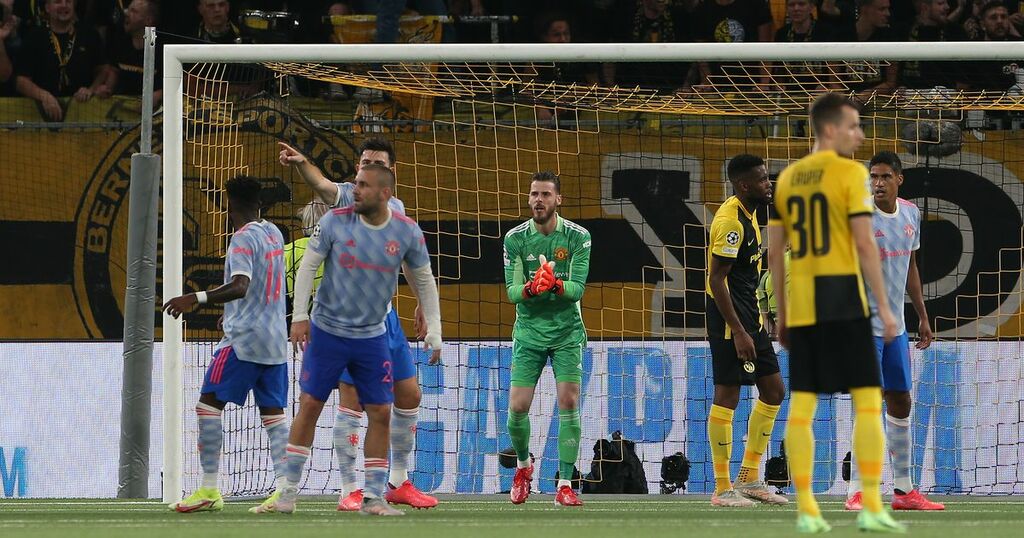 There is a bear pit just two kilometres away from the Wankdorf Stadium and the Bern natives should know not to poke the bear. Cristiano Ronaldo's name was booed prior to kick-off and again just 13 minutes in there was another Ronaldo goal. But then the Bern bear clawed back.

What was developing into a serene evening for United was spoilt by the careless Aaron Wan-Bissaka and a 95th minute winner. United are sticklers for nostalgia in the Champions League and Ole Gunnar Solskjaer spoke about the 'memorable nights' on the eve of the tie. This was not one of them.

Ronaldo has won more European Cups than United yet never progressed beyond the last eight in his three years with Juventus. United are a curious choice to sate his desire for a sixth and this was a galling opener. Solskjaer's in-game management again dubious.

Solskjaer, Luke Shaw, Raphael Varane, Diogo Dalot, and Bruno Fernandes thanked the away followers at full-time but the majority were so sick they were almost in the mouth of the tunnel before any of the Young Boys players had approached them for their shirt. They were out on the pitch long after full-time, celebrating with their supporters.

Wan-Bissaka is a naturally shy individual yet could have shown his face to the United fans who have the cost of Covid-19 tests to add to their European expense. Wan-Bissaka's first touch was errant and his second a red card. Jadon Sancho was immediately sacrificed for Diogo Dalot and Donny van de Beek's rotten run continued as he was withdrawn at the interval, his 16th United start ending prematurely.

Michael Carrick spoke to Varane at the conclusion of the first-half and he re-emerged long before the restart in his kit. Darren Fletcher pinged crosses for Varane to nod away. A sign of things to come.

Solskjaer switched to a defensive trident, a needlessly negative switch that heaped more pressure on United and it backfired when Varane was blindsided by Moumi Ngamaleu for the equaliser.

United improved when Nemanja Matic was introduced and his arrival should have been sooner. The late use of Matic encapsulated Solskjaer's decision-making in that he had no intention of over-exerting a probable starter at West Ham in five days' time when a point was deemed acceptable.

But United did not get their point. Solskjaer inexplicably hooked Fred, secure beside Matic, for the irrelevant Anthony Martial and it was another ineffectual substitute, Jesse Lingard, whose blind pass was intercepted by Jordan Siebatcheu. David de Gea was a condemned man. Once again, Solskjaer - the super sub as a player - did not make super subs.

The Young Boys substitutes and staff stormed the pitch. Their manager, David Wagner, presided over Huddersfield's most famous Premier League victory over United by the same scoreline.

This is ostensibly the best United squad since when they were last the competition's holders and they are better equipped to reach the latter stages. Their three changes in Bern consisted of recalling internationals from Sweden, Brazil and the Netherlands yet United played within themselves and portrayed an inferiority complex.

That did not tally with the bullish note Solskjaer struck on the eve of the tie. United blew it in the group stage last year and have reached the quarter-finals a pitiful twice since their schooling by Barcelona at Wembley in 2011.

It is the first of six group games and the extenuating circumstances of Wan-Bissaka's dismissal should ensure there is no demand for an immediate inquest. Yet Atalanta and Villarreal do not guarantee returns of maximum points and beating Young Boys home and away was seen as a given.

Wan-Bissaka was fortunate just to retain his place. The £50million right-back's recent selections have been by default and he is the weak link in United's stellar defence, unreliable at both ends, and he has regressed over the last year.

Ronaldo hit an unassuming steward with a wayward shot during the warm-up and soon inflicted his preferred brand of pain: goalscoring. On the night he equalled his former teammate Iker Casillas's Champions League appearance record, Ronaldo was bound to crown the occasion in a competition he once monopolised. It was his 135th goal in 177 appearances in the Champions League.

Ronaldo was considerate in dashing over to the felled steward, who required medical attention from the United club doctor Steve McNally. That thoughtfulness ceased with the first whistle.

Solskjaer lamented social media's obsession with assists yet Bruno Fernandes's curved pass for Ronaldo trumped the strike. The banana shape trajectory of Fernandes's pass, executed with the outside of his right boot, deserved to go viral. It was another goalkeeping error but there is a beauty to the scruffiness of Ronaldo's goals and his shot is a beast, as the unfortunate steward will attest.

That Portuguese telepathy will please Solskjaer, particularly given the scrutiny on Fernandes's efficacy alongside Ronaldo at international level. He was dropped during the European Championship and hooked long before the Republic of Ireland's luck expired in Faro earlier this month.

The visiting team's allocation was officially 1,800 tickets and several United fans were scattered among the yellow home stands, like ketchup dolloped on an egg. A couple in front of the press tribune sported 'Ronaldo 7' and 'Solskjaer 20' shirts. There were signs requesting Ronaldo for his shirt.

At full-time, he could not bear to look at them.