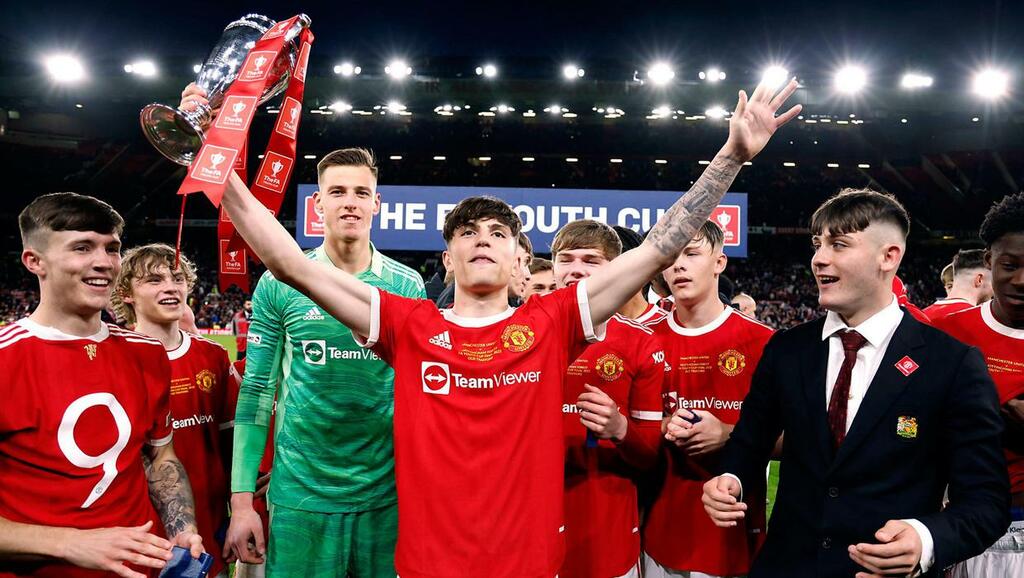 Manchester United’s academy is winning again and some of those kids should play in Crystal Palace dead rubber
If there is something of an end-of-term feel around Manchester United at the moment, you would not know it from…

Man United were in training on Thursday as they prepare for their final match of the season.

Manchester United’s academy is winning again – so why not play the kids against Crystal Palace?

If there is something of an end-of-term feel around Manchester United at the moment, you would not know it from watching their players who are still old enough to be in sixth form. In front of a record crowd of 67,000, the under-18s ensured that Old Trafford would end a difficult, drifting season at first team level on a much-needed note of positivity, winning the 11th FA Youth Cup of the club’s history.

This feel-good victory, secured late by Alejandro Garnacho, meant this was Old Trafford but not as we have known it of late. There was a trophy presentation – remember those? – and it was joyous. The lap of honour was well-attended and applauded. The standing ovations for young players who put everything into the performance were long and heartfelt. Even the several pitch invaders who interrupted United’s post-match celebrations seemed to be carried away by security a little more gently than usual.

Garnacho’s two goals – one from the spot, one in stoppage time – and captain Rhys Bennett’s first-half header proved enough to overcome a hard-working Nottingham Forest side. Backed by 5,700 travelling supporters of their own, Forest were unable to stop United's youngsters from maintaining their proud tradition in this competition. Despite the advances of Chelsea and Manchester City’s academy systems over the past decade, still no club has won it more.

And encouragingly, the man guiding United in their new direction had a hand in this success. John Murtough, now driving United’s football operations in his role as football director, helped to lead an overhaul of the academy structure at a time when there were accusations of the club falling behind City and other rivals. From recruiting under-18s manager Travis Binnion to restructuring the youth recruitment, United will hope Murtough’s work is a sign of progress to come at first team level.

Every one of United’s Youth Cup-winning sides has produced at least one player who has gone on to make more than 50 first-team appearances. If you were to pick one out from witnessing this 3-1 victory it would be Garnacho, but not only because he was recognised as the under-18s player of the year before kick-off and had his own adapted version of the “Viva Ronaldo” chant at full time.

Called up to Argentina senior squad last month, Garnacho displayed a selfish streak that outstanding young talents often possess. In stoppage time, having already scored what looked likely to be the winner from the penalty spot, he led a promising counter-attack in search of another. A pass was on to his left, to the Poland youth international Maxi Oyedele. Garnacho instead went alone and scooped his shot clear over the crossbar.

When a similar chance presented itself his way after a slip by Forest’s Ben Hammond a few minutes later, you wondered whether he would square the ball to one of his several teammates unmarked on the other side of the penalty area. Garnacho instead shifted right, cut back onto his left and created the space for a shot that deflected in off Pharrel Johnson. It was a slice of luck but one he had made for himself.

His earlier penalty, to take a 2-1 lead with 13 minutes remaining, was expertly converted and celebrated with Cristiano Ronaldo’s “siu” down by the players’ tunnel. Garnacho has had the privilege of seeing that celebration up close, having trained with the first team at Carrington in recent weeks, and made his senior debut in the final moments of the recent draw with Chelsea.

It would be a shame if those few minutes were the last that United supporters see of Garnacho this season. This final fell in the long stretch between United’s dismal defeat away to Brighton last weekend and a dead rubber trip to Crystal Palace on the final day. What do United have to lose by fielding the 17-year-old match-winner among a handful of other youngsters in their last outing of the campaign?

There is no question of integrity with Palace safely in mid-table. Technically, United will still have something to play for but if the choice is between the Europa League and the Conference League, it is not much of a choice at all. Given the expected summer overhaul ahead of a new start under a new manager, would a line-up looking to the future not fit the occasion? It has happened before, after all.

Palace were United’s final day opponents five years ago, coincidentally, only this time at Old Trafford. Just as with this season, United had failed to live up to lofty pre-season expectations and certainly in their forgettable league campaign. Jose Mourinho’s decision to name several young players in his final day line-up was influenced by a forthcoming Europa League final three days later, but still a bold and symbolic gesture.

The average age of United’s line-up that day was 22 years and 284 days, the club’s youngest in Premier League history. Scott McTominay and Joel Pereira made their first starts. Demetri Mitchell debuted, as did Angel Gomes from the substitutes’ bench. Josh Harrop had the most memorable afternoon of all those trusted by Mourinho, scoring the first after 15 minutes in what would be a comfortable 2-0 win.

Of the youngsters to get on the Old Trafford pitch, only McTominay has since established themselves as a first-team player. Harrop left for Preston North End almost immediately. Mitchell did not play for United again. Pereira made just one more appearance. Gomes remains United’s youngest Premier League player from his introduction for the outgoing Wayne Rooney that day, yet departed last year for Portugal and Boavista.

Judged solely on those terms, Mourinho’s stunt could be seen as a wasted experiment. But one of the abiding memories of that day came after the final whistle, when the youngsters and debutants were joined for a photograph by Marcus Rashford, Paul Pogba, Jesse Lingard and fellow academy graduates.

It was a pertinent reminder of one of United’s core principles at a time when they were seemingly being forgotten, and in that sense, not too dissimilar from Wednesday’s final.

The feel-good factor of this Youth Cup win could easily be forgotten too unless it is carried forward into the new campaign and, indeed, the new era under Erik ten Hag. United have very little to salvage from this season. Better to end it with one eye on the future.

Manchester United’s academy is winning again and some of those kids should play in Crystal Palace dead rubber
If there is something of an end-of-term feel around Manchester United at the moment, you would not know it from…

Man United were in training on Thursday as they prepare for their final match of the season.