Manchester Food and Drink Festival 2021 dates, programme and everything you need to know 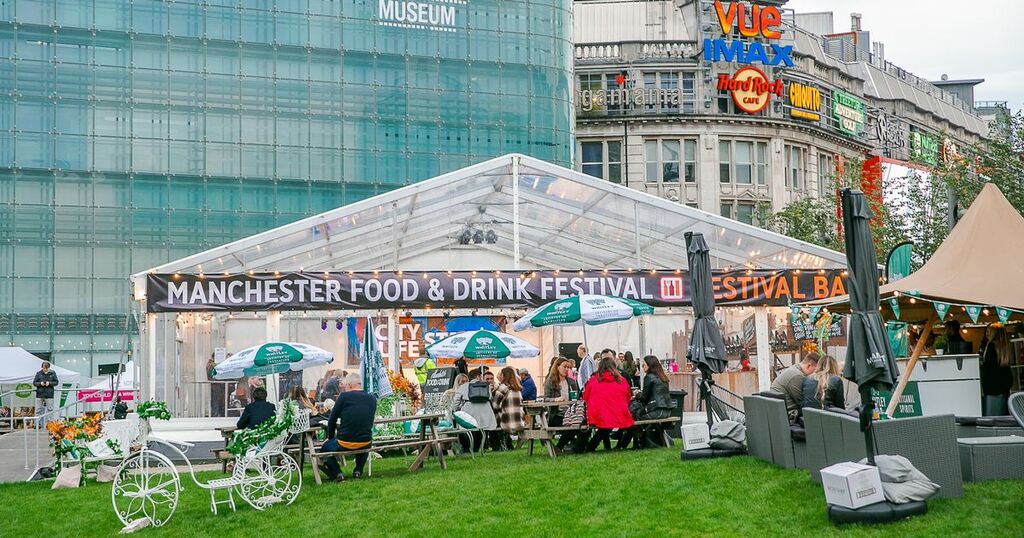 The Manchester Food and Drink Festival will be back in full force later this month, bringing together the city's finest hospitality businesses for a 12-day-long celebration.

Last year's event had to go virtual despite efforts for it to run in a socially-distanced format.

But the 2021 festival, its 24th edition, is gearing up to launch back at Cathedral Gardens, and in venues across Manchester.

It's always one of the biggest dates in the city's food calendar, attracting some of the region's best chefs, producers and operators as well as thousands of visitors.

The whole thing will culminate in the MFDF Awards, recognising our outstanding local operators.

It’s free to enter and no booking is required, although some tables within The Hub will be available to book over the two long weekends.

The full programme has now been released. Here's what you can expect from MFDF 2021.

When is the Manchester Food and Drink Festival 2021?

This year's MFDF will kick off on September 16, at both the Festival Hub and in venues right across Manchester.

Food and drink events will then fill the diary for almost two weeks, wrapping up in the MFDF Awards gala.

The celebrations will wind down on September 27.

You can vote for your favourite restaurants, bars, pubs and more in the MFDF Awards via the MFDF website or the MFDF app.

What street food is there?

MFDF's headline sponsors Just Eat will create their own Festival HQ at the Cathedral Gardens festival hub, with a rotation of street food operators.

The area will have swing seats, giveaways, and goodies including discount vouchers.

Beyond that will be masses of other street food offerings in the Festival Hub street food market.

Aunti Ji’s - bespoke dishes that capture the flavours of the East.

Grandad’s Sausages - bangers made in Bury.

What about to drink?

Franklin and Sons will host a gin and tonic bar, while hard seltzer brand Truly will run a can bar of alcoholic sparkling water.

The programme of events

A series of fringe events, as well as huge banquets and celebrations at the Festival Hub, have been put together for this year.

You can see details and book tickets for them all at foodanddrinkfestival.com/events/main-programme.

Serving up an exclusive five course set menu, expect unique umami tweaks on traditional British cuisine, inspired by the best produce the British Isles and Ireland has to offer.

Some of the region’s finest and most exciting independent wine retailers and brands will take part in this year's Wine and Fizz Festival.

Attendees can taste their way through dozens of incredible wines from around the globe, with retailers including South Manchester wine delivery service Decent Drop, Prestwich’s Grape to Grain, and UKiYO Republic showcasing Japanese Sake.

With summer coming to an end, local natural and organic wine experts Le Social are switching to warmer styles of wine and will be presenting creamy whites, savoury orange wines and comforting reds.

£30 tickets include the tasting of 6 wines and snacks.

Tom Kerridge's renowned Manchester restaurant The Bull and Bear will be taking over the Festival Hub for one night only, with a pop-up pub grub concept.

There'll be a three course supper designed especially for the occasion, including a braised beef and blue cheese pie, and live music to soundtrack the evening.

Tickets will cost £55, which includes all your food.

Taking place at Mana, Manchester's only Michelin star restaurant, this special dinner will bring together some of the most innovative chefs in town, each preparing a course.

There are only 26 tickets available, priced at £200 per person, and it's all to raise money for Greater Manchester’s amazing social enterprise, and Festival partner, Eat Well.

This local Ancoats restaurant will collaborate with It's Alive, natural wine supplies, for a special feast.

A mammoth chippy tea feast from some of the region's best fish and chip shops and restaurants - and it's free.

Albert's Schloss will be bringing a huge Oktoberfest celebration at MFDF, serving Bavarian street food throughout the evening.

Expect bratwursts, pretzels and wild Schloss-style live entertainment. It's free, and there's no need to book.

A five-course dinner at Tast, in association with Macallan Whisky, designed to take you all the way to Barcelona with a touch of Scotland.

Social enterprise Open Kitchen will host a wine tasting evening for the festival, matching a range of wines with cheeses and small dishes.

A celebration of low- and no-alcoholic drinks, hosted in a secret location at Kampus by wine experts Le Social.

It's a collaboration with Stores Supply and Muri Drinks and tickets are £5.

Dedicated to the party and fantastic drinks, Le Social will host an all-day disco party with Supernature Disco, a DJ collective playing house and disco in Manchester and beyond.

Live music at the CityLife Stage

Hot-stepping out in uniformed style, they channel the spirit of the 24-hour party people, guaranteed to get audiences dancing wherever they play.

The CityLife Night is a special festival music night, hosted by the Manchester Evening News and CityLife, bringing the hottest local talent to the festival.

This year the stage will be headlined by homegrown sensations, The Lottery Winners.

From 8pm the band will be playing an exclusive acoustic preview ahead of their first Manchester live gig at the O2 Ritz on September 25.

Stars of the North West covers band circuit, the group have picked up rave reviews performing all across the UK.

All in one show you can expect indie and rock anthems, acoustic sets, reinvented 60s and 80s legends, and some surprises.

Later in the day, BBC 6 Music’s Mark Radcliffe heads to the festival stage with his band.

Manchester legend Clint Boon brings his Boon Army spirit and sounds to the festival stage for a feel good mid week set - the perfect soundtrack to the Big Chippy Tea taking place on the same evening.

One of Manchester's favourite singer-songwriters and festival favourites, Dave Fidler takes to the stage.

An evening of top-class Schloss entertainment including the Schloss house band and roaming performers.

Manchester’s first jazz manouche non-purists, Gypsies of Bohemia are an acoustic group who perform modern pop favourites like you’ve never heard them before.

Returning for the second weekend for more lively brass entertainment.

Girls On Film founder and Hits Radio Presenter will be playing her usual charismatic set to keep the Sunday vibes going.

Free to enter and open from midday until 7pm each day of the Festival Hub, the MFDF Artisan Markets will showcase some of the region's best independent food and drink producers, makers and businesses.

HM Pasties - Pies and pasties handmade in Bolton with the social mission of reducing re-offending by employing people with criminal convictions.

Cheap eats around Manchester for MFDF

Several of Manchester's best-loved restaurants will be throwing together special offers and discounts for the duration of MFDF.

Some will require you to show the MFDF App - you can see all the details and terms at foodanddrinkfestival.com/offers.

Vapiano - fresh pasta and pizza with 20 per cent off.

TNQ Restaurant - four-course special festival menu, including a glass of Taittinger champagne, for £50.00.

Quarter House and Man With The Fish - 25% off the full bill for festival-goers.

The Mouse Trap - special cheese and wine tasting experience for MFDF, £20 per person.

It also unlocks discounts across Manchester.

The app can be downloaded in the apple and android app stores by searching ‘Mcr Food and Drink Festival’.