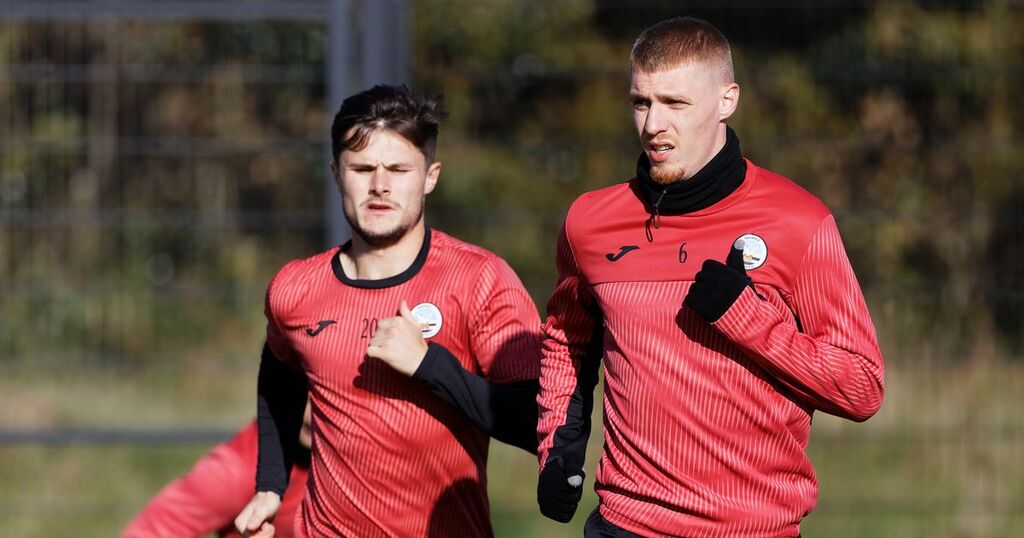 The League One side - who already have Morgan Whittaker among their ranks after signing him earlier this month - are inching closer to getting a deal over the line for Wales youngster Cullen.

Appleton outlined why they are so keen on the forward following their 3-1 win over Sunderland last night.

“He’s bundle of energy, he’s like a Duracell battery," he told our colleagues at LincolnshireLive.

“One, he’s good with his back to goal. Two, he comes alive in the box which is going to be important. He can play in numerous positions, either side [of the front three] but we want to get him centrally as much as we can.

“He’s an infectious character, I think the fans will love his personality.

“He’s everything you’d want in a striker.”

Should Cullen head out this month it would leave Swansea head coach Russell Martin with just two strikers in his squad in Joel Piroe and Michael Obafemi.

Given that the latter has failed to hit the ground running for a number of reasons since his summer switch from Southampton, it surely points to an attacking addition being made during this current window.

Swansea have been overly-reliant on Piroe's goals - ably assisted by Jamie Paterson - and with only 26 strikes being registered in the league so far this term, further goalpower is needed.

Martin has floated the idea of playing Obafemi up top alongside the Dutchman which could in theory improve Swansea's goal return, but one can't but help think Cullen's exit should mean a signing in the final third before January 31.

Meanwhile, new Swans signing Andy Fisher says the move to south Wales was "too good to turn down" after penning a deal with Russell Martin's men.

Fisher will now battle Ben Hamer for the gloves in Landore, with Steven Benda heading out on loan to Peterborough, a move that was also ratified yesterday.

The new Swans stopper worked with Martin and his staff during their time at MK Dons, and that was a big reason he was lured to SA1, along with the step up in standard Championship football brings.

“I am delighted the move is done, it is something that has been talked about for a while but it is finally sealed and done and walking in here has been unbelievable,” Fisher said of his signing.

“The people here have given me such a warm welcome, all the staff, and I cannot wait to get started.

“It’s an opportunity to play Championship football, but also I worked with the gaffer at MK Dons and the style of football he wants to play is just fantastic.

“I wanted to get back to that because it is something I really enjoyed doing.

“I went on loan there first, and once you are in the position and you work on it, is an unbelievable way of playing even if people may look at it and think it’s a bit scary.

“I just really enjoyed it, I feel comfortable with the ball at my feet, and with the level of detail Russell and Luke put in it just makes it so much easier for me.

“I loved working with (goalkeeping coach) Dean Thornton as well, who was great for me at MK Dons, they wanted nothing but the best from me as a group of coaches.

“I feel they will get the most out of me, and knowing that meant this was a great opportunity for me.

“I am really hungry to make the most of this opportunity.”

It is clear from his stats and the way that Martin wants to play that Fisher is more in the mould of a modern-day goalkeeper.

Benda appeared a tad uncomfortable with the ball at his feet in the opening games of the season, giving Hamer a chance he has grabbed quite literally with both hands.

Fisher will no doubt look to implement Martin's methods if he is given an opportunity between the sticks.

“There was a time where the goalkeeper’s job was only to keep the ball out of the net, and obviously that is still a vital part of the job,” he added.

“But that is not the case now, you have to be comfortable with the ball at your feet, that is what sides want to see and have at their disposal.

“You look at the top teams like Manchester City and Liverpool, and a lot of other good teams, and they are committed to playing out from the back.

“You have to be able to play your part in that side of it too as a goalkeeper, in that respect I think the game is changing very much for the better.”

Fisher's arrival is the first in what many fans will hope is a number of signings this month.

Ethan Laird, Whittaker and Benda have now all left SA1, with Cullen set to follow the trio out of the exit door imminently.

“With the pond we are swimming in we cannot go and spend millions of pounds on players in the Championship or Premier League. We are looking to identify someone like the next Flynn Downes,” the head coach recently said.

“We cannot spend huge amounts on wages for Premier League players, and then there is a tough balance with loans because unless they are going to be outstanding and make a huge difference to your side, I would prefer to develop our own players, like someone like Flynn."