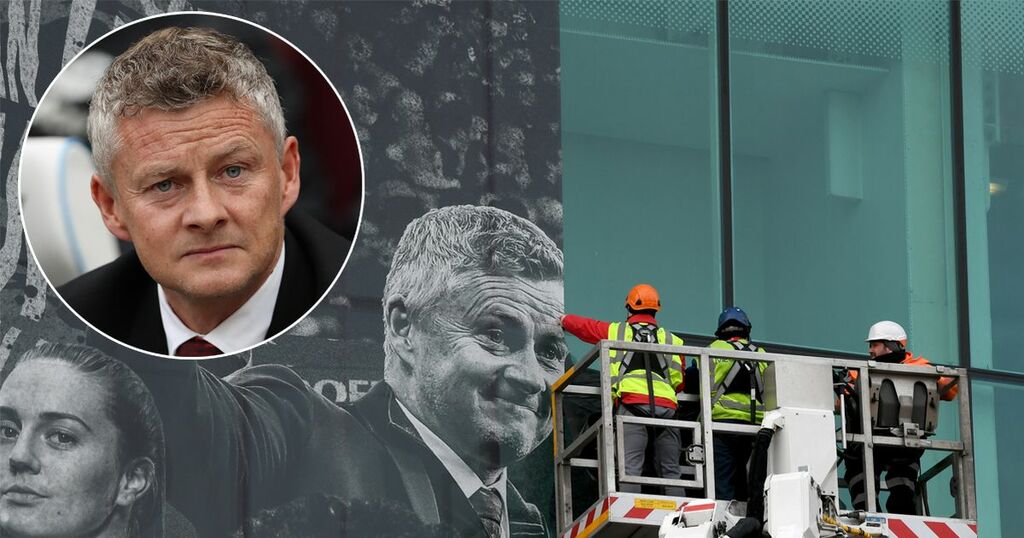 Manchester United took down posters of Ole Gunnar Solskjaer on Wednesday following his departure from the club three days earlier.

The Norwegian was sacked as manager after the team's 4-1 defeat to Watford, ending his three-year reign at the Premier League side.

Images of Solskjaer were plastered around Old Trafford, but these have now made way for new artwork to be installed.

The former boss left his post after a dreadful run of form, winning just one of his final seven Premier League games in charge.

Solskjaer led United to a second-place finish and the Europa League final last term but failed to build on that after investing around £140million in the squad last summer.

How should Manchester United honour Ole Gunnar Solskjaer for his services to the club? Let us know in the comments below!

The ex-striker remains a legend at the club for his playing career, scoring the winning goal in the Champions League final in 1999.

United are now believed to be on the lookout for an interim manager until the end of the season, with rumours linking former Barcelona boss Ernesto Valverde with the role.

The Red Devils are also thought to have interviewed Rudi Garcia, who guided Lyon the semi-finals of the Champions League in 2019-20.

Reports suggest Mauricio Pochettino is United's first-choice candidate to be their next permanent manager, with Erik ten Hag, Zinedine Zidane and Brendan Rodgers also in the frame.

Michael Carrick is the current caretaker manager - dubbed "interim interim manager" by the press - and won his first game in charge on Tuesday.

Goals from Cristiano Ronaldo and Jadon Sancho gave United a 2-0 win against Villarreal in Spain, confirming their place in the last 16 of the Champions League.

Carrick is not expected to succeed Solskjaer permanently, although he remains in the frame for the interim position.

"This is Manchester United they have to have the best in charge," said United icon Paul Scholes on Tuesday.

“Michael Carrick is a coach he’s had one game in charge with no experience anywhere else, he can’t. As much as I like the lad they can’t appoint him, they need the very best at interim or full time."

Fellow United legend Rio Ferdinand added: “I don’t think they will give it to Michael.

"You’re looking at Laurent Blanc; someone who wouldn’t be full-time.

"Someone like Pochettino when he was out of a job… there was murmurs he wanted to come to Man Utd in that period and it depends on how PSG see it.

"We have to wait and see but Man Utd need to make enquiries if they want a manager who is in a job those conversations will be going on now."