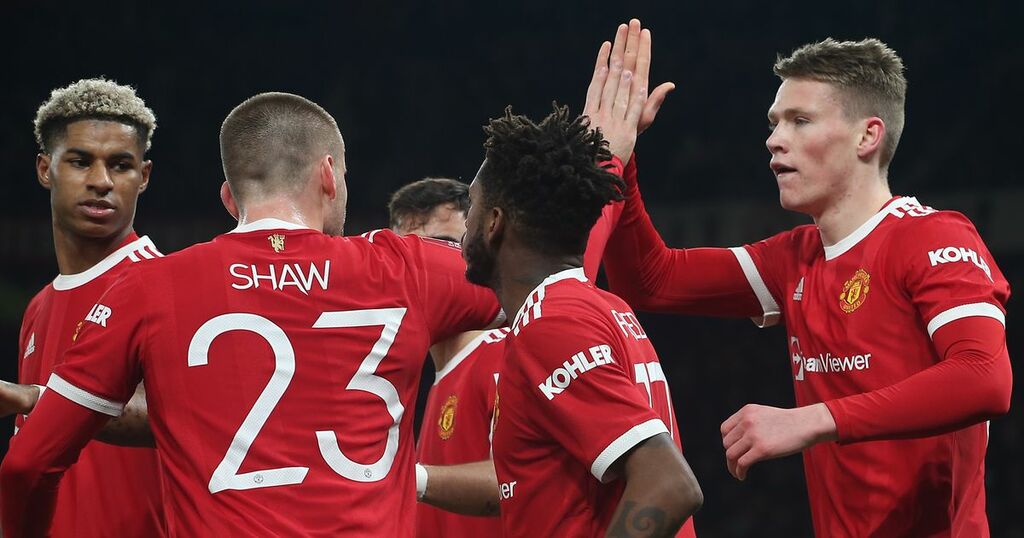 Scott McTominay's first-half header was enough for Manchester United to edge out Aston Villa and progress to the FA Cup fourth round on Monday night.

The midfielder glanced past Emiliano Martinez after a brilliant cross from Fred in the eighth minute to give the Red Devils an early lead.

Villa were unfazed by falling behind and posed a constant threat on the counter-attack with Ollie Watkins going close and Emiliano Buendia testing David de Gea in the first half.

Steven Gerrard had plenty to be proud of and his side thought they had drawn level shortly after the interval as Danny Ings prodded in Ezri Konsa's header from a free kick, but a prolonged VAR check resulted in the goal being disallowed.

Watkins also saw a strike chalked off for offside moments later as Villa ramped up the pressure on United, but Ralf Rangnick's side were able to hold out to set up a fourth-round tie against Championship side Middlesbrough in early February.

The result saw the Red Devils bounce back from their 1-0 loss at home to Wolves last week, while they face Villa again in the Premier League on Saturday.

Although they have often been criticised this season, Scott McTominay and Fred once again proved their worth at the heart of Manchester United's midfield against Aston Villa.

The pair - colloquially dubbed 'McFred' - combined for the opening goal eight minutes into the match as McTominay nodded in the Brazilian's sublime cross from the left.

It was a classy goal which continued the Scotland international's fine form, as he also scored the opener and produced a man-of-the-match performance against Burnley in late December.

McTominay has started all five Premier League games since Ralf Rangnick took to the United dugout and appears to be one of the first names on the team sheet under the German.

Fred's standing is less clear as he was benched for the last two fixtures, but he gave Rangnick something to think about with his technical and industrious performance across the pitch, although this tailed off somewhat as the game grew more frantic in the second half.

Although Manchester United took the lead early on, Aston Villa did not let their heads drop and nearly equalised on numerous occasions throughout the first half.

Villa's best chance of the opening 45 minutes fell to Watkins just before the half-hour mark when the Englishman turned Victor Lindelof in the area and hammered against the crossbar.

Moments later, Jacob Ramsey saw his effort deflected narrowly wide of the post as the visitors ramped up the pressure, but still they were unable to draw level.

At the other end, Edinson Cavani, McTominay and Marcus Rashford ensured De Gea was not the only goalkeeper kept on his toes, calling Emiliano Martinez into action during an entertaining first half.

Lengthy, VAR and check: three words football fans have grown all too tired of over the last couple of seasons.

And it was a familiar story early in the second half at Old Trafford after Danny Ings thought he had struck a deserved equaliser for Aston Villa.

The English striker seemed to prod the ball over the line with his thigh, but VAR investigated a plethora of issues surrounding the goal during a check which lasted three minutes and 36 seconds.

Firstly, if Ings was offside as Ezri Konsa nodded John McGinn's free kick across the box. Secondly, whether Ollie Watkins got a touch on the ball on its way through to Ings, and whether he was in an offside position at the time of Konsa's header. Thirdly, VAR seemed to check whether Ings finished with his arm or his thigh.

But the issue which saw the goal disallowed seemed to relate to an off-the-ball incident involving Jacob Ramsey, who appeared to block Edinson Cavani as McGinn delivered the ball.

In truth, fans may not know why referee Michael Oliver chalked off Ings' effort following his review at the pitchside monitor until he releases his report from the game.

Adding to Villa's frustrations, they also had the ball in the back of the net moments later as Watkins bundled Ings' dinked effort over the line, but the offside flag was up immediately on this occasion.

Manchester United have operated almost exclusively in Ralf Rangnick's favoured 4-2-2-2 formation since his appointment as interim manager, but they adjusted their set-up for the FA Cup clash.

Bruno Fernandes lined up in his traditional No.10 berth behind centre-forward Edinson Cavani, flanked by Mason Greenwood on the right and Marcus Rashford on the left.

It was a system regularly used by Rangnick's predecessor, Ole Gunnar Solskjaer, so it should have suited a squad reportedly struggling to adapt to the German's methods.

However, United looked just as shaky against Aston Villa as they did in their defeat by Wolves on the previous Monday and it was a largely unsuccessful audition for the 4-2-3-1 despite the result.

It seems unlikely Rangnick will persist with the system as United face Villa once again in the Premier League on Saturday.

Steven Gerrard confessed he was expecting a hostile reception from the Manchester United faithful during his pre-match press conference - and he certainly received one.

The Liverpool legend was booed deafeningly as he emerged from the tunnel ahead of kick-off and he did not shy away from the home fans, turning to the Stretford End to face them head-on.

Old Trafford then taunted its old foe with numerous anti-Liverpool and anti-Gerrard songs in the opening minutes of the match, and this resumed at half-time.

To the credit of the Villa manager and his team, they did not let the atmosphere get the better of them and can justifiably feel aggrieved with the scoreline.

The visitors' midfield diamond had the measure of United for much of the match and they played out of the press excellently before counter-attacking on numerous occasions.