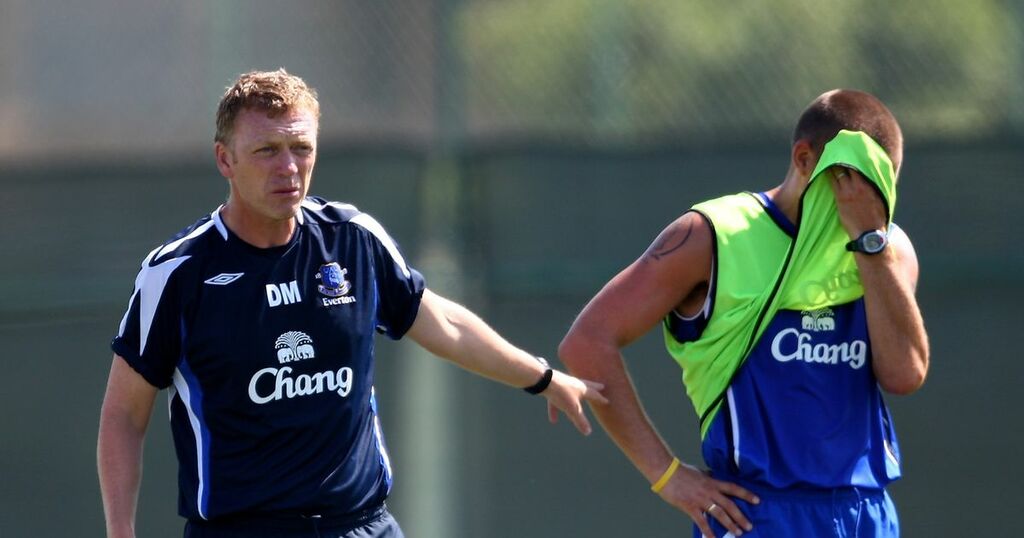 He not only got to pull on the royal blue jersey but captained his beloved Blues to what remains their highest Premier League finish to date.

It didn’t come easy though. His debut for the club didn’t come until he was almost 30 years old, by which time he’d beaten testicular cancer twice.

Even after his dream move, things didn’t always go smoothly with Walter Smith, the manager who signed him, was sacked before his first season was complete.

Then, after skippering the club to their best league finish since the 1980s, Stubbs found himself out of the door as David Moyes’ side prepared for Champions League football but h e was back just six months later though and has no regrets.

In a special exclusive interview to celebrate his 50 th birthday today, Alan Stubbs speaks to the ECHO’s Chris Beesley to look back on his Everton career.

The milestone of your 50 th birthday might be seen as a time to take stock but Alan Stubbs likes to look forward.

Swinging the clubs around helps keep former footballers active while also sating the sportsman’s need to be competitive.

But as much as Stubbs – with the Andalusian sunshine on his back – will feel that warm glow when he hears the satisfying low rattle of his ball dropping into the hole from a putt, it still won’t compare to the dimmer light at the end of the tunnel when taking to the turf at Goodison Park while the strains of Z-Cars are mixed with the deafening roar of the crowd.

READ MORE: The 18-year-old Everton striker who loves Didier Drogba could be just what Rafa Benitez is after

He told the ECHO: “If any Evertonian has even just walked up that tunnel at Goodison Park when there are no fans there, I’m sure they get a tingle down the back of their spine.

“I had that feeling multiplied by about a thousand when you walk out in front of a full house.

“It was one of the best feelings I’ve ever had. It’s big enough playing for Everton but to captain them and lead them out is beyond words.

Like thousands of others, Stubbs’ footballing ambition was to play for Everton but over a decade on from turning professional at Bolton Wanderers, he was starting to feel that dream would not become a reality before a sudden turn of events in the summer of 2001.

He said: “There was no sense of inevitability for me going to Everton. I’d always hoped and wished it might happen but for a long time I thought that ship had sailed for me and that opportunity had passed, especially with me being linked to them earlier on in my career.

“I just didn’t think it was going to happen, so when it did happen, it was unbelievable for me when I first found out.

“It was just after I’d overcome the second round of my cancer treatment, I was back playing and I’d been offered a new deal at Celtic.

“My agent called me and said ‘Listen, there’s a big club in the North West who are interested.

“For some reason I just didn’t think it might be Everton because I thought that one had gone, so I replied: ‘Who is it? Man United?’

“He laughed and told me: ‘No, somebody bigger to you.’

“I was like a big kid and was all excited. I discussed things with Walter before heading back to Glasgow see Martin O’Neill who was fantastic about it.”

“Martin said: ‘I’d love you to sign a new deal with us, there’s the contract, but I understand you might not ever get this chance again. Life is short and with what you’ve been through, you’ve got a big decision to make.

“He told me that whatever I went with, he’d totally respect it 100% and if talks with Everton didn’t go the way I wanted, the contract at Celtic would still be there for me.

“It all progressed very quickly and while I was really sad to leave Celtic, I was so excited to join Everton.”

Stubbs returned to his native Merseyside hoping that the transfer would provide him with some stability but manager Smith was sacked the following March and replaced by fellow Scot David Moyes.

He said: “Everton were going through a difficult period and you look at what Walter had done at Rangers and he was a really good manager but he was probably at Goodison at the wrong time.

“He’d been used to spending money to bring in the best whenever he liked and suddenly he came under the restraints of a very limited budget at Everton.

“It was tough for everyone at the club back then. Us as players would go out and try and do our best but it was even more difficult for the fans given the position they found their club in at the time, it was a real struggle.

“I was disappointed to see Walter go, as were a lot of the players, as we really respected him but it was a new chapter and David Moyes came in and reinvigorated the team.

“In that first year or two we were trying to find consistency but after that we started to see him really stabilising the club and slowly but surely, grow it.”

Stubbs, who would move into management himself – steering Hibernian to their first Scottish Cup win for 114 years in 2016 – explains how Moyes was able to revive an ailing Everton who had recorded just one top half finish in the Premier League during the decade prior to his arrival.

He said: “David brought and energy and enthusiasm. He had a real desire to be as good as he possibly could be and I think he really tried to stamp that authority on the team.

“We were organised, we were disciplined and I think that was something David was very comfortable with in terms of how to set up his team and in the end we were very hard to beat who didn’t give an awful lot away.

“In the early part of his tenure, as well as finding himself, he was finding us as well.

“With respect he’d come from a Championship club where the players were not of the same kind of profile as what he experienced at Everton, and I think he found that he couldn’t manage the same way as he’d done at Preston and had to adjust very quickly with how you dealt with some of those big personalities in the dressing room.”

There were some dramatic ups and downs in the early years with Everton going from finishing 17 th on just 39 points in 2004 to the club’s highest Premier League position of fourth a mere just months later.

Stubbs said: “We’d got used to David’s methods. It can take a little bit of time to get used to the way a manager wants to implement his style and his tactics on a team.

“When David first came in, he was very challenging towards everyone both on and off the pitch and wanted everyone to be as fit as they possibly could.

“We’d had a really disappointing season in 2003/04 and it was too close for comfort but the following year was the complete opposite.

“We were difficult to beat with lots of clean sheets and 1-0 wins and the camaraderie between the group of players was brilliant, it was incredible, everyone got on with each other.

“The season had started well for us and momentum started to kick in and we thrived on people doubting us.

“I don’t mean Everton fans but everyone else out there were saying we wouldn’t sustain it and Everton would fall away.

“That stuck like a thorn in the side of us and we just kept going and if we did get beat, we’d bounce back quickly.”

Rather than enjoy the fruits of his labours though, Stubbs, who had been captain, made a shock move to Sunderland in August 2005 after failing to agree a new deal, less than a month after Moyes splashed out £5million on Danish international Per Kroldrup, a centre-back who apparently struggled to head a football.

Stubbs said: “We’d just qualified for the Champions League and the club offered me a one-year contract.

“It was never about money, financially we’d agreed what it was going to be, but the length of the contract.

“At the time I felt that I wanted a two-year contract but David was saying that wasn’t the club policy.

“Ultimately, I believe that the club played on me being an Evertonian.

“The conversations were like, ‘Come on, let’s just get it signed.’ I thought given that we’d just had our best season for a long time and I’d been a big part of that, the offer didn’t really reflect that.

“I’ve had the conversation with Leon Osman and it can happen at a lot of clubs, they can take the local lads for granted.

“It happened and it was unfortunate but there was no bad blood between David and myself.

“When I spoke to David when I came back, he told me: ‘Let’s just draw a line under it, I think we both made a mistake.’

“I looked back, smiled and said to him: ‘I didn’t.’ He just smiled again.

“I’d have loved to have played in the Champions League but it wasn’t to be.”

Signing for Everton for a second time in January 2006, Stubbs would serve the club for a further two years.

He said: “When I came back it was like I’d never been away, and we managed to finish the season a lot stronger than we’d started it.

“I felt I still had a few good years left in me. The contract issue was never going to tarnish what it meant to me to play for Everton.

“For me I just wanted to get back in a blue shirt and playing again.”